The Bambino bargain: How the Yankees bought Babe Ruth from the Red Sox 95 years ago today

What exactly had to go down for Yankees owner and Hall of Famer Col. Ruppert to pull off the greatest heist in sports history?

Share All sharing options for: The Bambino bargain: How the Yankees bought Babe Ruth from the Red Sox 95 years ago today

As hard it might seem to believe, the New York Yankees were once the laughingstock of the American League. Originally founded in 1903 as a team known as the Highlanders for their games in Washington Heights up at rickety Hilltop Park, the current-day site of the Columbia University Medical Center, they were competitive in just two of their first 17 years of existence.

This team paled in comparison to the legendary John McGraw's National League powerhouse New York Giants and were even regarded as less interesting than Brooklyn's beloved topsy-turvy baseball team, then known as the Robins. The one year they had come closest to the pennant, their spitballing ace Jack Chesbro blew it on a wild pitch on the penultimate day of the 1904 season. Twice they finished in last place with over 100 losses, and by 1915, they had already been sold from original shady owners Bill Devery and Frank Farrell to beer distributor Col. Jacob Ruppert and his partner, the dazzlingly-named Army captain Tillinghast L'Hommedieu Huston.

However, on one fateful day 95 years ago today, their fortunes forever changed for the better. On December 26, 1919, the Yankees acquired a brash 24-year-old lefty pitcher named George Ruth from the Boston Red Sox. "Babe," as he was known to his teammates, was boisterous off the field but supremely talented on it and destined for a conversion to hitting full-time after setting a new MLB record in part-time outfield duty with 29 home runs the previous season, a total almost unheard of in the pitcher-friendly "Deadball Era." He was as exciting a young star as anyone in the game and played a pivotal role on three World Series-winning teams in a mere four-year stretch from 1915-18. So why on Earth would his team want to send him away? 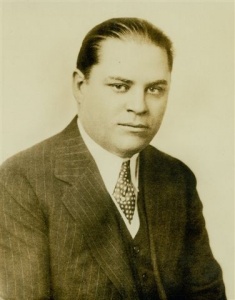 The story has most often been told as one depicting theatrical fanatic Boston owner Harry Frazee as a disgrace who had barely any interest in running a baseball club. Supposedly, the Broadway director wanted money to produce a new play, No, No, Nanette. He found that money by selling off his most talented star to the Yankees, and then went off on his merry way while the Yankees soared and the Red Sox plummeted to the AL cellar, where further player sales to the Yankees ensured they would stay for more than a decade. It's a nice, easy tale to recall, and that's what is etched in countless fans' memories.

As with many stories of life though, it's simply not that clean. There were far more complex plots leading up to the sale. Like Ruppert, Frazee was also a new owner of a baseball club. After failing to buy the Giants, Frazee discovered that Red Sox owner Joseph Lannin was willing to sell his team in 1916 following Boston's second consecutive championship. (The fact that Lannin was in debt certainly aided his willingness to sell.) With their stock higher than ever, Frazee purchased the Red Sox for $1 million, and soon, he got to celebrate a World Series title with them in just his second season in charge.

By Year 3 in 1919 unfortunately, it was getting dicey already for Frazee in Boston. First off, the end of the 1918 season had been somewhat bittersweet despite the Red Sox victory. The United States' entry into World War I had forced the season to end in September after just 126 games with an early World Series that ended on September 11th. Frazee was furious with AL president Ban Johnson for the way he handled the abrupt shortening of the season, which severely cut into Boston's potential revenue from their success. Johnson had disliked Frazee from his first day as Red Sox owner anyway, since the power-obsessed Johnson had played a notable role in selecting all seven other AL owners; Frazee was thus considered an outsider who sneaked into the club.

Matters also were not helped by both Ruth and Boston getting off to sluggish starts in 1919. Ruth's numbers were unimpressive at the beginning, bottoming out at an uncharacteristic .180/.315/.426 triple slash on May 26th. No one else was playing well, either, and the defending champions were 10 games behind the White Sox by only the end of May. Then, in the middle of July, controversial submariner Carl Mays decided that he had dealt with the Red Sox for quite enough and bolted from the team after an argument with manager Ed Barrow in mid-July.

Mays refused to return to the Red Sox, and eventually, Frazee worked out a trade with the Yankees to send him to New York in exchange for a couple nondescript players and $40,000. Johnson loathed that a malcontent player ended up rewarded for his insubordination, and the fact that Frazee was involved just made it worse. Johnson had five teams loyal to him in the league who he ensured would not make any further deals with Frazee. That left just the Yankees and Charles Comiskey's White Sox, the soon-to-be-infamous Black Sox of World Series-throwing notoriety.

At the end of the 1919 campaign, Frazee's finances were in awful shape. Attendance was up throughout baseball, but not much higher than the previous year for Boston due to their slump, and he wasn't generating great revenue from the fans. Frazee did what we could by selling off his major shares from his most successful previous Broadway productions like Nothing but the Truth, but it wasn't enough. The end of 1919 brought further dire news--Frazee's final payment of $262,000 to the previous owner, Lannin, was due, and Frazee had to deal with legal fees for his lawyers in his fights with Lannin and Johnson as well. Due to the success of his Broadway shows, he wasn't broke, but he certainly needed some extra money. He saw an opportunity in Ruth, who despite his success on the field was already threatening a holdout in order to obtain a pay raise. And so on December 26th, Frazee agreed to the terrible deed. His only possible trade partners were the White Sox and Yankees; Chicago offered $60,000 and the not-yet-banned Shoeless Joe Jackson while the Yankees countered with $100,000 straight-up. They also said that they would loan $300,000 to Frazee to help him out of his current struggles.

Frazee took the money and ran with it, putting Fenway Park (recently obtained by Frazee in another series of legal hoops since Frazee had not actually purchased it when he initially bought the Red Sox) up for mortgage. So not only did the Yankees have Ruth, but they briefly had essential possession of Fenway Park itself, something that they used as leverage against Johnson and Giants owner Charles Stoneham when they tried to throw the Yankees out in 1921. (Yes, there is a remote possibility that the "Boston Yankees" could have happened. What a world.) After the Ruth trade, they went on to help Frazee out in a series of other moves that sent several members of his former championship teams to the Yankees, such as Hall of Fame pitchers Herb Pennock and Waite Hoyt, shortstop Everett Scott, and even the manager Barrow, who became an extraordinary Yankees GM.

The rest, as they say, is history. So while Frazee wasn't in the process of financing the infamous play No, No Nanette, he certainly needed the money to help pay off his various loans and stay afloat. The Yankees soared in the 1920s with six AL pennants and three World Series titles, while the Red Sox would return to the World Series just once in the next 46 years. That was truly a wonderful Christmas present.