David Robertson had some great moments in Pinstripes, here are our favorites.

Last week, the Yankees lost a homegrown favorite when David Robertson left to sign with the White Sox. The arguments about whether or not the Yankees should've resigned him will undoubtedly continue for the next few months. But this post isn't about that. This is about remembering Robertson for the excellent pitcher that he was for the Yankees.

Q: David Robertson left to sign with the White Sox last week. What will be your lasting memory of his time in Pinstripes? 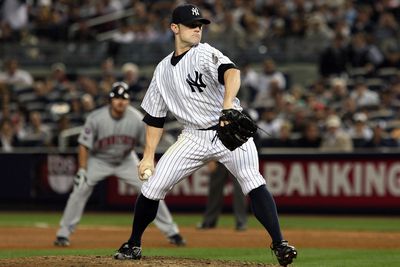 D-Rob might be a well-known closer now, but Yankees fans remember when he burst onto the scene in the playoffs five years ago. Ah, memories.

His Houdini performance in the 2009 playoffs. Specifically, his performance in Game 2 against the Twins. I was in the stadium, and A-Rod tied it in the ninth with a two out, two run homer off Joe Nathan (when he was still Joe Nathan). It stayed tied into the 11th, and the Twins sent up the heart of their order.  Damaso Marte gave up lead-off singles. D-Rob came in and gave up another ground ball single (to Michael Cuddyer), but with Joe Mauer running at second the Twins didn't send him with no one out. According to Baseball Reference's stats, the home team had only won 17% of all games played from that situation. Robertson got a line out to Tex, a grounder to Tex that he threw home for the force out, and finally a fly ball to center field to strand all three runners. Of course, it seems like a great play in the field often leads to a great play at the plate, and Tex led off the next inning with a homer.
It's the best playoff game I've ever seen live, and one of the best baseball games I've ever seen.

Gotta go with the bases loaded no outs escape job in the 11th inning of game 2 of the 2009 ALDS. That's the one that got him the Houdini moniker, after all.

Andrew had a post showing my personal favorite D-Rob moment. Game 2 of the 2009 ALDS against the Twins.

(Matt F: As you can see that game was a popular choice. See Andrew's answer for the post Greg references.)

The high socks and the fact that he eventually made me not care that he was wearing Willie Randolph's number.

I have two lasting memories of David Robertson in Pinstripes. First, was his two inning shutout performance in Game 5 of the World Series.

Second, would be his blown save in Jeter's final Yankee stadium game.

It's pretty ironic; I think David Robertson was such a great reliever for such a long time, but I'll probably remember his role in Derek Jeter's final game more than anything. It really annoys me that that was the last taste of him that fans saw--because many used that recency bias as a rationalization that he "wasn't that good"--but it can't really be denied that that's the greatest game he gave us as fans, even though it was a horrendously blown save.

My lasting memory of D-Rob will be watching hitters look helpless against his curveball and being so good at working out of jams (even if they were sometimes self-inflicted).

For some reason, the thing that sticks out the most about D-Rob for me was something that happened this season, weirdly enough against the White Sox.

On May 23rd, he came in to start the bottom of the ninth with the Yankees leading 5-4. Dayan Viciedo led off the inning with a single. Adam Dunn came up next and he did what Adam Dunn can do. He homered off Robertson. Just like that, a series opening win turned into a walk-off loss.

The next day, the game went to the top of the tenth tied when Jacoby Ellsbury hit a solo home run to put the Yankees ahead. Robertson would again come in with a one run lead to try and close out against the White Sox. After striking out the first two hitters, Adam Eaton singled. Eaton would steal second, putting the tying run in scoring position. Up against it again, naturally D-Rob struck out Gordon Beckham to seal the win.

Having short memories and pitching again not long after being frustratingly beaten is part of the job for a reliever. But few did it as well as David Robertson.

Those are our memories. If you're not too sad, leave your favorite David Robertson memories in the comments.