I was recently browsing Craigslist when I found an interesting listing advertising several Yankees autographs. The autographs appear on several pages of a note pad and the ad specifies exactly who signed where: 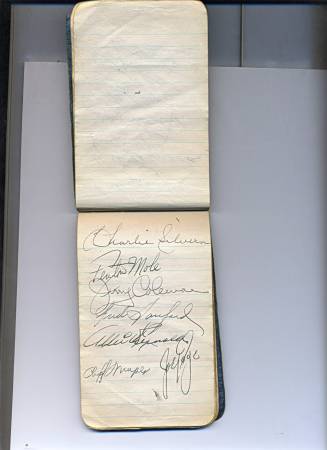 It even states that the autographs were given at North Philadelphia Train Station "about 65 years ago," which sounds like it would have been an awesome experience. Trying to figure out exactly which team this was, I took the ad literally and originally believed this to be the 1948 team, but several of the players that are mentioned weren't on the '48 squad. Pitcher Ralph Buxton, second baseman Snuffy Stirnweiss, first baseman Johnny Mize, and second baseman Jerry Coleman were not on the 1948 squad. Catching legend Bill Dickey also being there proved this was a different team, considering he retired in 1946. After a two-year absence, Dickey returned to the Yankees in order to mentor a young Yogi Berra in the art of catching. That would make this the 1949 New York Yankees.

If you want to get into a more specific time this autograph signing might have taken place, there are a few hints that can narrow it down further. Ralph Buxton came to the Yankees at the end of July in his age-38 second season after a 10-year gap from his last time in the majors, Mize didn't join the team until the end of August, and Fenton Mole was a September addition, which proved to be his only time in the majors. Looking at the schedule for that year, the Yankees faced the Philadelphia Phillies for a doubleheader on September 5 and then again for a three-game set from 27-30. The North Philadelphia Train Station was also used as a mainline to St. Louis, where they might have been going to play a doubleheader against the St. Louis Browns on September 14. This could have been a reporter covering the team or maybe it was simply an excited fan who hastily found some paper to have them sign.

The 1949 team had six All-Stars that year and five future Hall of Famers in Yogi Berra, Joe DiMaggio, Phil Rizzuto, Johnny Mize, and Bill Dickey. Future Yankees manager Ralph Houk and a 24-year-old Coleman were also on that team. They went on to win the World Series against the Brooklyn Dodgers only a few weeks after this short moment in history. It's a pretty cool memento from a small moment in time.