The greatest Yankees commericals of all-time

The true measure of Yankee greatness is marketability. Obviously.

Share All sharing options for: The greatest Yankees commericals of all-time

Historically, the Yankees have kind of paled in comparison to other teams when it comes to making amusing commercials. While teams like the Twins and Mariners absolutely nail it (Exhibit A and Exhibit B), the Yankees have shown some #slack in their commercials. Fortunately, over the years, various players have found the right mix in random commercials.

"Hey Coney, why don't you have a dance?"

Everything about this commercial is gold, from turning arguably the greatest pitching motion in Yankees history into a dance to Luis Sojo's classic line, and of course everything about David Cone. Orlando Hernandez produced many great moments in pinstripes and helped deliver three World Series titles, but this might be the most important product to ever result from his career. Hyperbole shmyperbole. Also, if you haven't seen Matthew Floratos's post with GIFs from this commercial, you need to fix that right now.

Capturing the essence of Billy Martin and George Steinbrenner, this classic Miller Lite commercial put a spin on the late owner and manager's chaotic relationship. Never mind the fact Miller Lite is piss water; at least it eventually resulted in this commercial.

About 25 years after his commercial with Martin, "Big Stein" took the stage again with this gem that was actually based off a real-life story about Steinbrenner's public complaints about Derek Jeter's night life. Yes, that actually happened. Don't miss that about the Boss, do ya? Fortunately, the two sides patched it up and turned it into this commercial, which actually features Steinbrenner doing the conga. Life.

I wouldn't slap that after Taco Bell

At first it seems like your average weird commercial with random people. Then BAM out of nowhere, two of the greatest players in the history of baseball are in blue bonnets eating corn. My God. 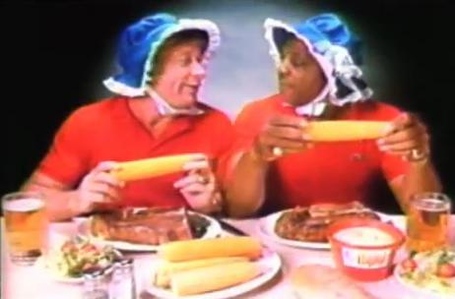 "You firing your agent, Willie?"
"You bet your ass, Mick."

Maybe we shouldn't be surprised about Mickey Mantle's questionable choices. He also appeared in a beer commercial that featured the slogan "Natural Light: Taste is why you'll switch." Oh.

"You guys ready to rent some cahs?"

Avis kind of ran this commercial into the ground on YES Network, but the last line and the subsequent reactions are still amusing a few years later.

"It's like being a huge fan of winning, which we do. Relentlessly.

I thought about not including this New Era ad since it doesn't actually feature Yankees. However, it gets points for not only including actors for two of my favorite TV shows (30 Rock and The Office), but for airing during the 2011 season in which the Red Sox utterly collapsed down the stretch despite the now-lolzy high preseason expectations. Excellent work.

Dammit, do I miss that place.

Not a funny commercial, but an all-time classic simply because of Joltin' Joe. Per usual, he was so particular about shooting these commercials that the take had to be exactly perfect for him to approve it. He simply was Mr. Coffee.

"It's the only candy bar that tells you how good it is when you open it up." - Catfish Hunter

"And they give ya cash, which is just as good as money."

Yogi Berra has had some choice commercials over the years, though sadly I cannot locate the Hanes one he did with his sons in the '80s. Fortunately, this Aflac ad rivals that one in ridiculousness.

I'm sure I've missed some great ones. I thought this video with Curtis Granderson picking at-bat music was a commercial, but it wasn't. What are your favorite Yankees commercials?