Remember those two or three postseason games in which A.J. Burnett went out there and threw grenades? This was one of them. Good times.

I think it was a few months back when I boldly announced that during the offseason we’d be swimming out into the large ocean of archive film and coming back with GIFs of old games in our fishing nets. Then people started getting signed to things called contracts, and then Joe Tacopina slid into the ring between the ropes, grabbed one of those WWE branded microphones, and started spitting hot nonsense into it. In other words, I found myself sidetracked. My compass was spinning like I’d entered the Bermuda Triangle. But now we’ve remembered that great idea, and we’re returning (after the aforementioned hiatus) to the 2009 World Series.

Before that, let’s take a break. I strongly encourage you to point your browser to yankeesgifs.com. There you’ll find a Tumblr blog with all the GIFs we’ve created! Well, most of them. I’m still in the process of adding all our work there. If you have a Tumblr, you can follow us and reblog/like our animations. All the GIFs we create—including the ones that don’t make it into these posts—will be posted there. Not only that, but you can search for things! Go ahead and type "reply gif" into that search box there. I think you’ll like what you find. 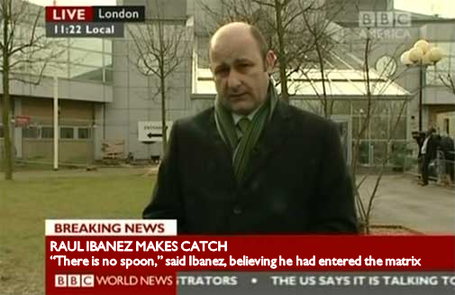 I like the idea of either buying or winning tickets to this historic event and then squandering the experience by watching it through a ridiculous mask, its eyeholes likely the size of pinpricks. Well done, alien boy. For two seconds there you were America’s most irritating denizen.

¡Atención Chris Stewart! This is how to catch. You’re going to be playing for the Pirates next year—America’s team, I think we can all agree—and I don’t want you attempting this and instead firing the ball into the third base bag. We all remember you flubbing this play in Toronto.

The Jeterian order of thinking:

The great New Zealand cricket play-by-play man Bryan Waddle—who once called an entire game on his own while in the throes of a reportedly messy stomach bug—might have used the following phrases to describe Hideki Matsui’s marvelous swing (think "[term] into right!"):

Generally speaking, there aren’t enough verbs deployed in baseball commentary. It’s because everyone has to drop everything as soon as anything happens so that they may issue their own unique and almost certainly ridiculous home run call. Listen, I’m tuning in to watch/hear the game, not to hear you make it your own show in explaining how Mark Teixeira just used his bat to send a text message into the stands, or how cool Raul is. Or how it’s at the track and at the wall and it’s out of here, all spoken as if the Hindenburg has just crashed again. More of the above, please.

Whichever term you favor, we can safely say Pedro Martinez did not get that one into the block hole.

SOMEBODY GET THAT YOUNG MAN SOME MEDICAL ASSISTANCE

Please Describe in Precise, Exact, and Definite Terms Who Your Daddy Is

Well, at least he’s a good sport. He knows when he’s been had. I like that.

Mini-Facts the Public Was Forced to Hear

These guys fo— they focus, they... [Three second pause.] They zone out everything.

Ironic that McCarver evidently loses focus when talking about focus.

Tim McCarver on life in general:

Pete Mackanin is the bench coach of the Phillies and he has Bob Uecker humor. Last year he was the scout for the New York Yankees. He said, "Just think—I’m responsible for both teams being here." [chuckles] Obviously he’s kidding. But he’s a funny, funny guy.

You need to know that this was recounted in an absolute monotone. A monotone that had a certain drowsy quality to it. Well, listen, I know I’m never going to a comedy show again. What's the point? There’s really no topping that zinger.

The GIF party continues deep into the night! Find previous posts here (that’s a link, that is). Find a work-in-progress catalog of our work here! And follow us on Twitter here.