The MLB owners have unanimously voted in favor of expanded replay for the 2014 season. The Players Union and umpires have already approved it, so the new system is finally official. Expanded replay has been the talk around baseball since the 2009 season, when home runs were first deemed to be reviewable. Now, under the new system, virtually all plays, other than balls and strikes, can be reviewed by the umpires.

Baseball will use a challenge system, similar to the NFL, where the manager can challenge a play they deem to have been judged incorrectly. Each manager has one challenge per game, but if the umpires reverse their decision on the field, the manager gets their challenge back for a maximum of two challenges. While the umpires review the play, replay will be made available on the scoreboard, regardless of which team is calling for the review.

The umpires will serve as the replay officials, deciding whether or not a play under review should be overturned. MLB is also hiring two additional umpiring crews of eight umpires who will be stationed at the central replay location in New York. Most replays are expected to take a minute to a minute and a half to rule on. Once the game gets into the seventh inning or later, the crew chief can decide to use replay in any reviewable call, so essentially the umpires will be able to police themselves, to some degree.

This new system will hopefully help end the controversy in catch/trap, fair/foul, safe/out, black and white calls, but also plays like the neighborhood call, which can be more of a judgement call. The replay system would also help enforce the new rule outlawing home plate collisions. Players can no longer collide with the catcher and catchers can no longer block the plate, so having a way to review a play that can happen in seconds is not only helpful to the game, but essential for the players' safety.

While I agree that expanded replay has long been needed, using challenges essentially limits the amount of times the umpires can get it right. I understand they don't want every play to be challenged, but a really bad umpiring crew could make more than two mistakes against one team before the seventh inning. It's nice to see that the umpires can police themselves, but limiting it only to the last three innings of the game puts too much value in the idea that only the happenings of the 7th, 8th, and 9th innings are important. Game-changing events can happen at any time, so the umpires should be free to correct their mistakes whenever they can.

No system was going to be perfect, and it will be interesting how they will make changes in-game, but In the end, this is a great step forward. What do you think? 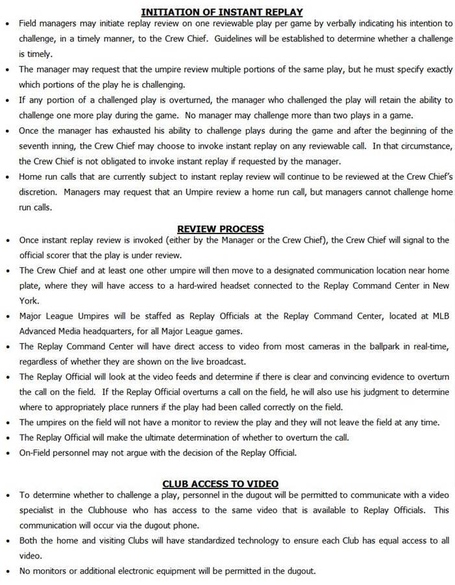 Here are the plays that can be reviewed: