If you're looking for out-and-out dysfunction, you've come to the right place.

Share All sharing options for: Swing and a GIF: Matrix-like fielding, Birardi, and Excited Ivan Nova

Let me tell you what a GIF is: it is a document of the human condition. Each GIF is a snapshot, a moment in time—a time-slice, as I once heard it referred to in a hot doc about string theory and multiple universes presented by my boy Brian Greene—that is capable of capturing the full gamut of human emotions and behavioral states. Joy? We have that. Confusion? We have that. Pain? We have that. Pure, unadulterated dysfunction? Please believe. Consider the following: 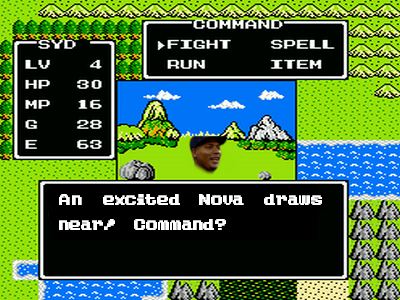 Credit to Sydlexia for the original screenshot.

I like the guy in the back who applauds immediately at the first sign of a fight breaking out. What a dynamite individual—I’d love to get to know him better.

After losing his 80 frame tool status, Chris Stewart can now claim to be an 80 predictor of ball ricochets. So said manager Joe Girardi who, when asked to comment on the catcher’s critical passed ball, said only that he thought "Stewie played the carom off the wall really well, and that’s why we have him here. He’s a gamer."

In which no one bothers to tell the outfielders—the three position players farthest from the dugout—about defensive changes.

Paul Simon hears what you have to say, thinks deeply about it, and then decides it’s garbage.

I’ve just sent off an email to the Commissioner’s Office about Performance Enhancing Instincts, and I expect to hear rumors of impending suspensions shortly. I talked off-the-record to a noted and highly sanctimonious beat reporter who wished not to be named. "Those instincts aren’t normal," he said. "They’re cat-like. This is Biogenesis all over again. This is Cat-ogenesis."

The poor woman being struck in the head is the least interesting thing about this GIF. To say that a baseball to the head is painful is so obvious as to be redundant. (Her head stays awfully rigid, as we can see in this super close-up.) Rather, consider the fantastic reactions of those around her.

Subject zero, who I’ll go ahead and call Harold, is struck by the ball prior to the woman (it appears to clip his beefy forearm). Meanwhile, Harold attempts to catch the ball with camera in hand! Luckily for the camera, both his timing and location is off, and I suppose thank god for that.

We all know that nothing is more dangerous than a baseball in the wild. An untamed baseball has the force of 1,000 Hiroshima-level warheads. Per this alarming statistic, this man takes appropriate duck-and-cover action, serving as a role model for all the kiddies watching at home.

Not just one, but two.

No words for how dope this guy’s moves are. I don’t know what that thing is called when you slick your hand back like that, but this guy’s technique is, in a word, superior. I want this to be adopted as the de facto reaction for whenever there’s some baseball-related mishap in the stands—flow back, move on.

SOMEBODY BEING HIT IN THE SKULL THAT’S WHAT

I’d like to thank you for your service, Sir.

Bonus: She Only Wanted to Be Happy