A Swing and a GIF: Anger and despair edition

The season may be over, but GIFs never die. Get all cheered up with these displays of incompetence and insanity.

Share All sharing options for: A Swing and a GIF: Anger and despair edition

While it may be the case that the Yankees’ season has ceased, before me I have something that shall never cease: our weekly transmission from Planet GIF, that gas giant which bears all the GIFs your wildest dreams are made of. Let’s set out now, but before we set out, may I repeat a humble request I made a month or so ago? If you feel the need to vent about this season—and who can blame you—I submit that you do so in GIF form, GIFs being a medium that we can all enjoy; a medium that we can all revel in. To wit:

Meredith Is Not at All Being Blue Screened Into Rogers Centre

As has been noted before, it is absolutely true that Mark Reynolds is blind. That may be enough to explain why he puts down a ball which he, just seconds before, had been holding with certainty. But wait—there’s more.

The rabbit hole... it never ends.

This is a simple one, but I like it a lot. Here’s why: initially, CC’s like, Oh, what’s going over there? (raised brow and all). Then he’s like, back to ice cold—now you have my attention. Simple but neat, I say.

Joba had been throwing the ball pretty well coming into tonight. Where do you want me to go? I wasn’t sure what I was going to get from Cabral, so I went with the [guy who has] experience. I had Warren. He was a guy that I was probably going to use later on. Joba used to pitch in a lot of close games. That’s who he was.

The manager of your New York Yankees, ladies and gentlemen.

Anatomy of a Crowd 2: Fat Man and Little Boy

So, yes, yes, he’s great—but let’s not over look the rest of the motley crew we find in this GIF. Because they are all fantastic.

Middle Aged Man Desperate to Be on Television

This man begins the GIF in the top right corner, and then makes his way into the center, in full view of the camera. Now he can tell his grandchildren that one day, for just a few seconds, he was on television. "I MADE IT, KIDS."

I don’t know what that is, but it’s probably illegal.

Yes old man, you’re at a ballgame. Hold on a second… is that a giant hoop earring?

It is! Grandpa Eugene evidently walked straight into a piece of curved rebar on his way to the game. 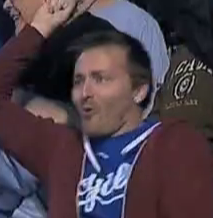 Let us not forget the friend, whose half-hearted crotch grab and stiff dancing will forever be criminally underrated, eclipsed by the moves of his corpulent companion.

Two Women Who Are Not Amused

I’m with you, sisters.

Two years ago, Freddy Garcia tried to protect us from the butcher called Eduardo Nunez by "inadvertently" incapacitating him. Sadly Garcia’s efforts were for naught. Check this out though: where are you going, Edward? Somebody has already called for the ball. And not just anybody—a person that is several orders of magnitude better at fielding than you. You would mishandle a ball lobbed at you from across a room, let alone a pop-up with the sun glaring down at you. Best leave well alone when the Tex-man announces he's got it. Some alternate angles:

You know what would have been good? If Freddy had yelled "BOOM" and then pranced around triumphantly like The Rock after dropping the people's elbow.

In all seriousness, it’s amazing Nunez didn’t injure himself there given that he is, as you well know, made of two-thousand-year-old papyrus. In any case; thank you for that bounty, GIF gods. Find us on Twitter, and hit this for more GIFs.