CC Sabathia done for the season with hamstring strain

Share All sharing options for: CC Sabathia done for the season with hamstring strain

On Friday night, CC Sabathia actually had a pretty decent start against the Giants. He went seven innings, allowing one run on seven hits and three walks, striking out four along the way. It wasn't vintage CC, but the Game Score of 60 made it his ninth-best start of the season. 2013 has been a struggle for the supposed ace, easily the worst year of his career with a 4.78 ERA (116 ERA-), a 4.10 FIP (100 FIP-). 2.7 fWAR, and a jarring 0.2 rWAR.

September actually seemed to be going okay for the big fella though. He was rocked in his start at Fenway Park against the Red Sox, but he did notch Game Scores of 56 and 54 against the White Sox and Orioles. Again, while not great by CC's normal standards, they at least offered some optimism. 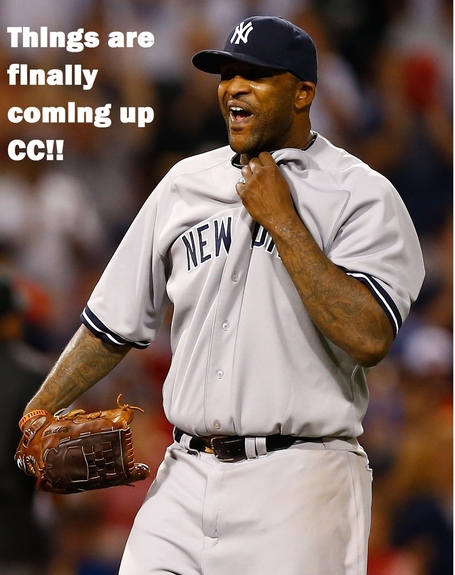 CC Sabathia has been shut down for 2013 due to a hamstring strain suffered Friday. A fitting end to an awful season.

Well that's what you get for trying to be too much of a tough guy. I appreciate CC's competitive nature, but if the Yankees were actually still in the playoff race, they would definitely prefer CC to start again instead of anyone else not in the rotation. Oh well.

And so ends CC's horrible season. Joel Sherman reported that recovery time is an estimated eight weeks for CC's Grade 2 strain. It is unclear who will take the ball for CC's last start (which would have been during the upcoming Rays series), but it could be anyone of David Phelps, Adam Warren, Brett Marshall, or David Huff.

The only probable pitcher listed on the Yankees' website is Hiroki Kuroda for Tuesday night. They considered using the off-day to skip Phil Hughes and start CC instead, but that won't happen now. They have six games in six days to end the season, so if they keep players on normal rest aside from Hughes, they might not even have to start any of Phelps, Huff, and crew. They might just go with Kuroda/Hughes/Nova in the Rays series, and Pettitte/Kuroda/Hughes in the Astros series. I'd rather see them try Phelps or someone else who actually has a future with this team instead of Hughes or Huff, but I guess we'll see.