Alex Rodriguez is the Big Rodowski

Baseball has been kidnapped and her life is in Alex Rodowski's hands. Is he about to enter a world of pain?

Share All sharing options for: Alex Rodriguez is the Big Rodowski

A way out west there was a fella, fella I want to tell you about, fella by the name of Alex Rodowski. At least, that was the handle his lovin' parents gave him, but he never had much use for it himself. This Rodowski, he called himself The Rod. Now, Rod, that's a name no one would self-apply where I come from. But then there was a lot about the Rod that didn't make a whole lot of sense to me.

Approximately one year ago in Commissioner Rodowksi's study...

We've had some terrible news. Commisioner Rodowski is in seclusion in the West Wing.

It's funny. I can look back on a life of achievement, on challenges met, competitors bested, obstacles overcome. I've accomplished more than most men. What...What makes a man, Mr. Rodowski?

Is it...is it, being prepared to do the right thing? Whatever the price? Isn't that what makes a man?

Sure, that and archaic blackout rules.

You're joking. But perhaps you're right.

Baseball. She is the light of my life. Are you surprised at my tears, sir? 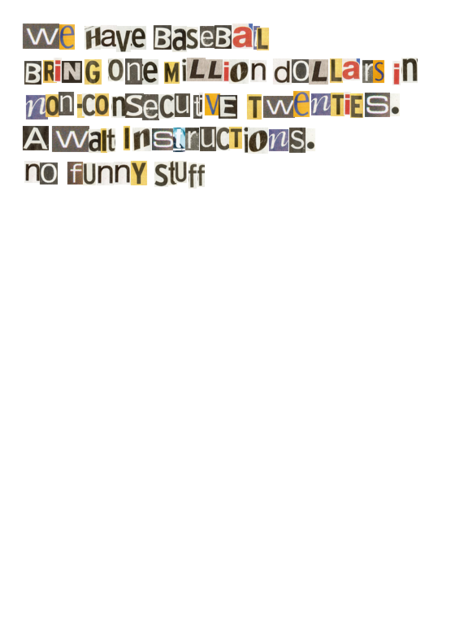 As you can see, it is a ransom note. Sent by cowards. Men who are unable to achieve on a level field of play. Men who will not sign their names. Weaklings. Bums.

Torre will fill you in on the details.

(Several months pass. The Rod, Commisioner Rodowski, and Torre are in a limo)

We've been frantically trying to reach you Rod.

Where's my money, you bum.

This is our concern Rod

NOTHING IS EFFED! THE PLANE HAS CRASHED INTO THE MOUNTAIN!

C'mon man, who're you gonna believe? Those guys are...we dropped off the money.

I...the royal we, you know, the editorial...I dropped off the money, exactly as per se...Look I've got certain information, certain things have come to light, and uh, has it ever occurred to you, man, that uh, instead of running around and blaming me, that this whole thing might just be, not, you know?

What in God's holy name are you blathering about!

I got new information. New info has come to light, man...and man...Baseball kidnapped herself. Look at it. Beautiful trophy sport, I mean, in the parlance of our times, owes money all over town, including to known art dealers, and that's cool, that's cool...but baseball needs money, and of course they're gonna say they didn't get it 'cause baseball wants more, man, I mean...hasn't that ever occurred to you...Sir?

No. No Mr. Rodowski, that had not occurred to me.

That had not occurred to us, Rod.

Well, okay, you're not privy to all the new info, so uh, you know, but that's what you pay me for. Could I get my twenty grand in cash? I gotta check this with my accountant of course, but my concern is that, you know, it could bump me into a higher tax--

Torre, give him the envelope. Since you have failed to achieve, even in the modest task that was your charge, since you have stolen my money, and since you have unrepentantly betrayed my trust, I have no choice but to tell these bums that they should do whatever is necessary to recover their money from you, Alex Rodowski. And with Torre as my witness, tell you this: Any further harm visited upon Baseball, shall be visited tenfold upon your head.

(Documents fall out of the envelope)

By God sir. I will not abide another Balco.

(At a coffeeshop a few hours later)

Then whose documents were those, Braun?

How should I know? I do know that nothing about it indicates--

Fine Rod. As if it's impossible to get some signature and apply it to someone else's documents.

Someone else's...where are they gonna--

You want a document. I can get you a document, believe you me. There are ways, Rod. You don't wanna know about it, believe me.

I'll get you a document this afternoon...with signatures. These amateurs. They send us a document, we're supposed to crap ourselves with fear. Jesus Christ. My point is-

Well that's just, that's the stress talking, Rod. So far we have what looks to be like a series of victimless crimes-

What about the writers?

FORGET ABOUT THE EFFEN WRITERS!

(The Rod is relaxing at home. Someone enters)

Hey, this a private residence, man.

Vee vant za money, Rodowski. You think vee are kidding and making vit dee funny stuff? Vee could do things you only dreamed of, Rodowski. Vee belief in nussing.

Tomorrow vee come back and strain your quad.

I SAY WE STRAIN YOUR QUAD!

I thought you might now, man. She hasn't run off, she's been-

I've heard the kidnapping story so save it. I know you're mixed up in all this, Rod, and I don't care what you're trying to take off the Commissioner. That's your business. All I'm saying is, I want mine.

Yeah, well, right man, there are many facets to this, uh you know, many interested parties. If I can find your money, what's in it for the Rod.

Of course there's that to discuss. Refill?

Do centaurs poop in the clouds?

Darkness washes over the Rod

Jetes Treehorn tells us he had to eject you from his garden party, that you were drunk and abusive.

Visiting friends over the All-Star break. Just picked up and left. Never bothered to tell us.

But I guess she told Steroids.

Who's this gentleman, Rod?

You shouldn't go in there Rod. He's very angry.

Well, Baseball's back. No thanks to you.

We know the briefcase was empty, man. We know you kept the million dollars.

You have your story, I have mine. I say I entrusted Baseball's life to you, and you stole it.

You thought Baseball had been kidnapped and you could use it as a pretext to make some money disappear. All you needed was a sap to pin it on, and you'd just met me. You thought, hey, a deadbeat, a loser, someone the press won't care about.

All right. Get out. Both of you.

You don't have the girl. We know you never did.

Are these Robot Umpires, Braun?

No, Rodowski's contract. These are steroids. Nothing to worry about.

Are they going to hurt us?

They won't hurt us. These men are cowards.

Welp, that about does her, wraps her all up. Things to've worked out pretty good for the Rod and Braun, and it was a purt good story, dontcha think? Made me laugh. Parts anyway. Course, I didn't like seeing Rodowski's contract go, but I guess that's the way the whole durned human comedy keeps perpetuatin itself, down through the generations, westward the wagons, across the sands of time until...look at me. I'm ramblin again. I hope you folks enjoyed yourselves. 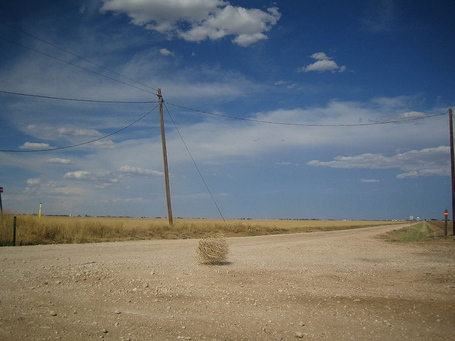