Yankees make like early birds in day games after night

The Bronx Bombers have proven to be masters of the doubleheader, but what about their performance when following up a night game with a matinee the very next day?

Weather permitting, the Yankees follow up a dreaded doubleheader with the equally lamented day game after a night game. These two scheduling hurdles are never greeted enthusiastically by managers, especially those with teams in a pennant race, but for the Yankees at least, the hand wringing is unnecessary. 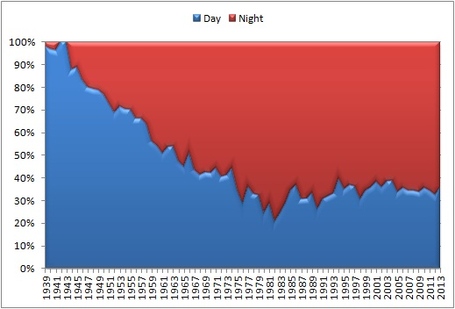 The Bronx Bombers have proven to be masters of the doubleheader, but what about their performance when following up a night game with a matinee the very next day? In all day games, the Yankees have had a good amount of success, winning over 56% of the 11,513 contests under the sun since 1901. However, that isn't the best baseline for comparison because it includes almost 40 seasons without any games played under the lights. 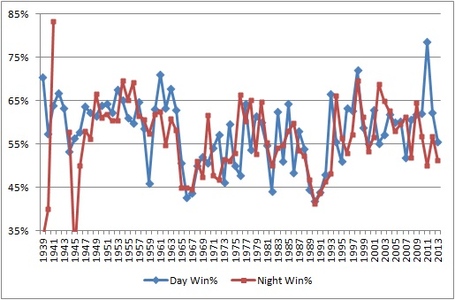 You can't have a day game after a night game without the latter, so the best point for drawing a comparison are those seasons when the schedule included a mix both. Since baseball under the lights was inaugurated in 1939, the Yankees have won over 59% of the 5,746 games played in the day (vs. 56% of the just over 6,000 night games). With that as a baseline, we can return to the question at hand. 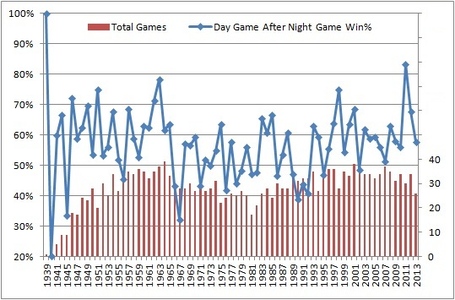 Heading into today's game, the Yankees have won 1,179 of the 2,059 day games immediately following a contest at night, yielding a winning percentage of 57.3% that lags the over 60% success rate when there hasn't been such a quick turnaround. However, it should be noted that the Bronx Bombers have won 56% of their night games during the same span. So, although the Yankees have had more success in day games not scheduled after a night game, the early wake up call has proven better than simply playing at night.

The Yankees played their first night game in 1939, but Yankee Stadium didn't have lights installed until 1946. That season, the Yankees played only 17% of their games at night, a rate that gradually increased to the approximately 65% played under the lights today. With such a wide variation in the schedule's mix, a comparison might be better served by segmenting the sample according to the prevalence of night games in different eras.

Segment Based Comparison of Yankees' Performance, 1939-2013 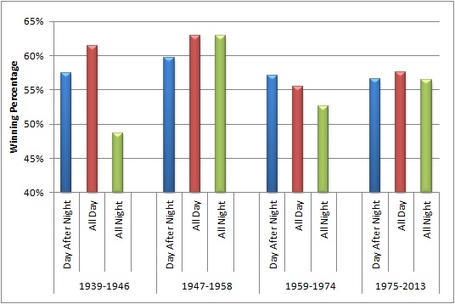 Before the end of World War II, there were very few night games played, and the Yankees performed relatively poorly in them. The hangover also impacted day games played after night. However, when the mix included between 20% and 40% night games, the Bronx Bombers were equally potent in the day and night, but less so when an afternoon contest followed one in the evening. Once the distribution reached about even, the Yankees were better in the day than night, but at their best when the turnaround was immediate. Finally, since 1975, when the rate of night games has ranged from 60% to 80%, the Bronx Bombers have been most successful in day games not following night games, with the other two segments trailing just behind and about equal.

Segment Based Comparison of Yankees' Performance, 1996-2013 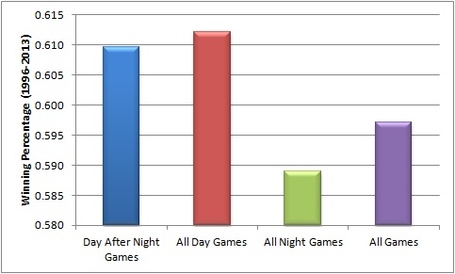 Finally, since the start of dynasty run in 1996, the Yankees have been equally strong in all day games, regardless of what preceded them. Of course, the team's 59% win rate in night games over that span isn't too shabby either. Ultimately, these comparisons are merely splitting hairs because, for most of the last 113 years, the Bronx Bombers have enjoyed considerable success, regardless of the position of the sun at first pitch. So, the Yankees need not fear day games after night games, or any other obstacle the schedule may throw their way. Time is not an issue, provided it does not run out.