MLB errors and their frequency trend

If you think scorers have been getting easier on handing out errors over the years, then you’re right.

Share All sharing options for: MLB errors and their frequency trend

This has been a pet peeve of mine for a number of years. I started watching professional baseball in the mid-70's. Subjectively I've felt for a while that the application of the error in scoring ballgames has changed dramatically. As a kid I remember announcers describing certain plays as a major league error. Now it seems like scorers go to incredible leaps of logic before issuing the dreaded error to a fielder. So the first question I wanted to answer was if there was anything to my subjective belief, or if I'd just become a crotchety old man.

I'm not that old, but last Monday night's game had two great examples of plays that I thought would have been easy errors a couple of decades ago. In the bottom of the fifth, Curtis Granderson pulled a soft ground ball over to the right side of the infield. Second baseman Grant Green fielded the ball easily with his glove and turned his body to make a short throw to first base. While removing the ball from his glove, Green fumbled the ball allowing Granderson to reach safely. Amazingly the official scorer called it an infield hit. YES network announcer Ken Singleton said he needed the Wite-Out for that scoring decision. Green was never in any hurry, and Granderson would not have beaten the throw to the bag if the ball hadn't been fumbled on the exchange.

The second example occurred in the top of the seventh inning. Mike Trout hit a sharp ground ball to shortstop. Eduardo Nunez decided to move backwards to get an easier hop. Nunez then double clutched, assuring that the speedy Trout would beat the throw to the bag. Trout was credited with an infield hit. I flipped the channel over to MLB Network to listen in on an interesting debate regarding this play. I was surprised to find that Larry Bowa, a guy who arguably is one of the top 100 greatest defensive shortstops in the game, was arguing that it should be scored as a hit. His points as I understood him were as follows: 1.) it was a hard hit ball that Nunez had to back up to get a safer play on the ball, 2.) Trout's speed is what forced Nunez to rush and double clutch on the throw, 3.) Nunez is not an every day shortstop so he shouldn't be held to the same standard as a better fielder. I'll give Bowa a break on this last one, because Nunez's defense is so horribly bad that I can understand him mistaking him for a player out of position. I actually really like watching Bowa in this format, so these responses definitely took me by surprise.

Billy Ripken took up the other side of the debate. His points were: 1.) as a scorer you can't take into consideration the quality of the fielder. The determination for an error has to be the same for every quality of player. 2.) Nunez double clutched the throw. If he had gotten it off cleanly, then Trout would have been out. Thus, Ripken argued that the play should have been scored an error. I think Ripken is absolutely correct on his first point and Bowa is being too gracious in forgiving Nunez's poor defensive abilities for scoring the play one way or another. The issue of Trout's speed is where it gets interesting. I never saw a replay that I could even take a guess as to whether or not Nunez would have gotten him with a clean throw on the first try. However, there is a topic that I didn't hear addressed by anyone on the panel.

The difference to me concerning a debate about this kind of play today versus the past, is that no one addressed what Nunez should have done at the start of the play in order to give him the best chance to record an out. The guy at the plate wasn't just called up from the minors; it was Mike Trout. There shouldn't be a decision between charging a short hop and stepping back to field an easier hop. If Nunez was even an adequate defender he would have moved towards home plate to field the ball considering the batter's speed. That's the difference between a major league error and seeing me play for free as a kid in high school stabbing at balls around second base. I suspect you would be hard pressed to find an instance where Derek Jeter made such a poor defensive decision as Nunez did there. Playing a ball in a manner that allows a batter to reach base safely is just as much of an error as fumbling the exchange. It seems to me that the subjectivity of the level of difficulty has been continually reduced over time. Allowing more batted balls that professionals were expected to turn into outs a few years ago into head scratching hits. The Trout hit at least has a number of interesting points to debate, but the Granderson freebie is beyond my comprehension to explain.

So am I going crazy here, or has the bar really been dropping that much lower? Turns out it most certainly has. This investigation started based on my subjective notion of what I remember seeing in the 70's and 80's versus today. So that was the time frame I started with for my comparison. I wanted to see how many errors were being recorded as a relationship with the number of balls put into play. My method for doing this is to divide the number of errors in a given season, by the total amount of plate appearances subtracted by total strikeouts and walks. I then did this for every season in five year increments from 1950 through 2010. This is what the chart looks like of that data: 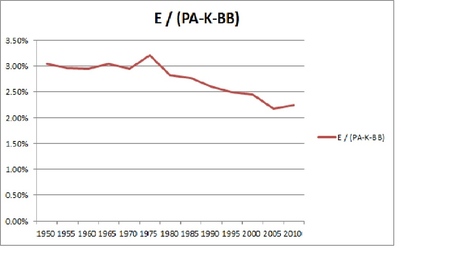 The rate of errors on balls put into play stayed fairly consistent around three percent for about three decades. Then in the 1980's, a trend started that took that ratio down to around the current rate of 2.25%. If you think that a .75% difference on balls in play doesn't sound like much, then to put it in perspective that's close to ten basis points on a given player's batting average. In other words, it's the difference between hitting .300 and .290. Just imagine what it could be doing to pitchers' earned run averages. By the way, the trend in increasing strikeouts has been widely discussed in recent years, but did you know that walks per plate appearance are actually down since the 1950's? Not only that, but there were years where hitters actually walked more than they swung in futility for the entire league!

But wait, there's more! I started to wonder what it looked like further back in the history of baseball, so I did the same calculation for the end of each decade dating back to 1890, and what do you think I found? 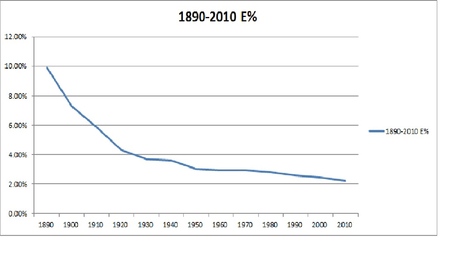 Oh, the horror. So how much of this is the general improvement in the players, call it the professionalization of the game, versus the changing perspective of what constitutes an error? I think it's both here, but I'm not sure how to answer how much of which and when. There are two diametrically opposed forces in the mix as I see it. On the one hand, you have a decent amount of expansion occurring over the course of the league's history. Total plate appearances have basically doubled since the 1920's to today. On the other hand, though, you have had an expansion of the player pool along the way to increase the opportunity for elite talent via the end of segregation and the expansion of the sport outside of the United States. However, as Andrew Zimbalist once noted, many records usually occur after periods in which baseball expanded due to the dilution of talent. Therefore, if anything, I would expect a bias towards increasing errors in the league versus declining.

There has clearly been a significant and, as it turns out, consistent trend in baseball for determining fewer balls put into play as errors. There have been periods where the rate of errors stayed somewhat static, but the recent 30 years has seen another continuation in the historical long term downtrend. While the influx of international talent in recent years has helped to increase the available pool of talent, I doubt that it has been enough to offset the dilution effect from periods of expansion. What that leaves us with is the likelihood that scorers have changed their subjective interpretation of what constitutes an error at the major league level. Why this has occurred is beyond the scope of this investigation, but might make for an interesting psychologist's graduate thesis. I certainly could be criticized for spitting in the wind here. Whether or not a given play is scored a hit or an error does not change what matters most. The winner or loser of any given game will still be the same, but I can't get that play out of my mind with Green easily fielding the ball into his glove. Methodically turning to first to throw the runner out and then fumbling the ball on the exchange from his glove to his hand. That's not a hit folks. Why can't we just call an error an error?