Share All sharing options for: Yankees lineup vs. Angels, Huff up, Dellin down, weird replay system coming to baseball?

Lots of news to report this morning as the Yankees get set for their series finale against the Angels this afternoon.

Austin Romine returns to the lineup in the day game after a night game, and Ichiro Suzuki again takes a seat in favor of Vernon Wells against the lefty. Even though it's Wells is better against southpaws than righties, Ichiro has no platoon split and has better defense, so it would really be better if Ichiro played, but oh well. Guess they really didn't want to sacrifice Lyle Overbay's first base defense by trotting Wells out there.

The Yankees made a roster move for more bullpen help this morning, as they sent the recently-recalled Dellin Betances back to Scranton in exchange for lefty mop David Huff, who briefly appeared in a game for the Yanks on May 26th and hasn't been seen since. It seems quite strange since Dellin only pitched an inning and a third the other night, so it's not like he would be unable to pitch for a few days. They must just really not have liked what they saw from him, which seems unfair. One game should not dictate a demotion, especially one with other annoying factors like a sudden half-hour rain delay right after warming up and some shoddy defense. Yes, part of the responsibility for that is on Dellin for throwing the easy pitches to hit, but again, it was one game. Huff offers nothing important for the future; he is just an arm that is not Dellin. Whatever. Hopefully we'll see Dellin back soon and Huff only pitches in blowout scenarios.

To make room for Huff, who was not on the 40-man roster, the Yankees put David Phelps on the 60-day DL. Phelps has not pitched since early July due to a strained forearm, and he was recently shut down after more pain forced him from a rehab start with the Trenton Thunder. That does not bode well for the rest of Phelps's season, even though he could theoretically be activated by early September. Given 2013 and his setback, it's looking more and more like he might need Tommy John surgery, but we'll have to hope for the best that his recovery goes smoothly.

Rumors came from Major League Baseball that more instant replay will likely come soon, though not until after the season. It will apparently include a challenge system with a restriction of one challenge over the first six innings and two from the seventh on, a laughably arbitrary rule, even though challenges are kept if they are upheld. So basically if the central New York crew (who will do the review) makes a mistake on a replay against a team the first six innings or if a manager decides to challenge on a close play and is wrong only to have blatant call against a litle later, OH WELL. Perhaps MLB will fine-tune that decision, but right now, it looks very silly. As Craig Calcaterra articulated at Hardball Talk, the whole challenge system is questionable since it forces unnecessary strategy to be applied to obvious mistakes:

Why must there be a challenge system? The entire point of replay is to get calls right, not to only get calls right when a manager decides to employ a certain strategy. Put in a challenge system and the manager has to decide: "hmmm, should I say something about that obvious mistake the umpires just made, or should I let if pass in case there’s another mistake later?" It’s a total passing of the buck. 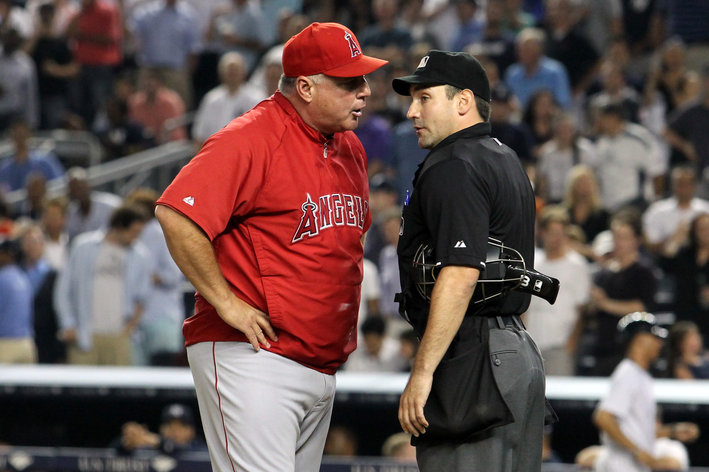 The owners are mulling whether to allow managers to initiate in-game challenges, a la the NFL.

At the moment, it's also unclear as to which calls can be challenged. MLB approved challenges on traps vs. catches and foul line calls, but there has been no word on umpire errors on the basepaths, which seem to be a worse problem. Hopefully, that is included in reviewable calls, otherwise what's the point of another baby step? If technology allows you to get the call right, get the call right on a second look. Otherwise the umpire looks bad, baseball looks bad, and the results are flawed.

It's better than no replay at all outside of homers, but sheesh. MLB can do it better. We'll have more on this replay topic later on.