The Braves are interested in Joba. What can they offer in return that fulfills a Yankees need?

Joba Chamberlain started his Yankees career with so much promise. He was a first-round draft pick in 2006, and proceeded to mow his way through the minor leagues, making his major league debut a year later in August 2007. He was lights-out as a rookie coming out of the bullpen. The next year, he split time between the bullpen and rotation, posting a career-best 3.4 rWAR, 3.2 fWAR. His third season, 2009, was spent in the rotation, and he performed well for a 23-year-old, even with the infamous Joba Rules. Instead of building on that success, the Yankees moved him back to the bullpen full-time in 2010, where he has been ever since. 2010 was his last healthy year, as he has spent significant time on the DL in the past three years.

This year, many Yankees fans have lost their patience with Joba. Part of this is due to his terrible play – a 5.75 ERA, 72 ERA+,-0.3 rWAR, 5.08 FIP, 3.98 xFIP, 138 ERA-, 122 FIP-, -0.1 fWAR, although his underlying stats aren't as bad as the results. It's also due to some bad PR moments – the Mo incident, for example, the fact that he is a free agent at the end of the year and his role was filled pretty admirably by the gentlemanly Preston Claiborne while he was on the DL. Then there's the bitter aftertaste of unfulfilled potential; Yankees fans are in the anger stage of the five stages of grief when it comes to Joba.

Giants and Braves have interest in Joba Chamberlain 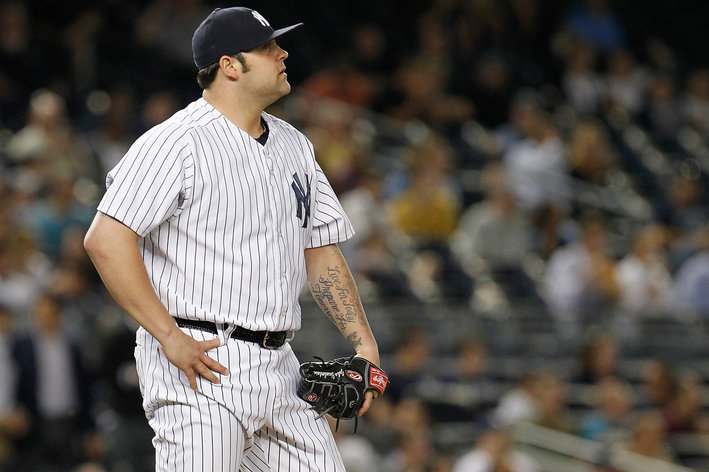 But they have a chance to move into the bargaining stage. Recently, the Braves and Giants were rumored to be interested in Joba. Both need bullpen help, and Joba should be cheap to acquire, with some upside potential. The Yankees biggest needs are at third base and outfield. Neither the Braves or Giants have anyone really available at those positions, especially for the price of Joba. So, what do these teams have that they can offer to the Yankees?

The answer is international bonus pool space. The Yankees have the third-lowest amount available for bonuses to sign international free agents, which is especially problematic for a team that has historically built their farm system through international signings. And they probably won't go the Texas Rangers' route and completely ignore the bonus limits this year and pay for it next year. This year, 120 bonus slots were created, similar to the Rule 4 amateur draft, however, each slot's bonus amount can be traded, in full, to another team. A team can acquire an amount equal to 50% of their original bonus pool and if a team trades for more than that, their pool will be reduced to 150% of their original bonus pool.

The Yankees signed Yonauris Rodriguez, a shortstop from the Dominican, for $575,000 on the first day of international signings. That leaves them just over $1.3 million to sign other players. They have been heavily tied to Leonardo Molina, ranked the fifth-best international prospects this year by Baseball America. Molina has to wait until he turns 16 on August 1 to sign, however, he may cost more than what the Yankees have left in bonus pool space. Marcos Diplan, ranked sixth by Baseball America, signed for $1.3 million. Yeyson Yrizarri, ranked seventh, signed for $1.375 million. Others in the top ten: Yeltsin Gudino (eighth) got $1.2 million; Micker Zapata (ninth) got $1.6 million; and Jose Herrera (tenth) for $1.06 million. It seems that Molina will push the limits of the $1.3 million the team has available for him and other international players.

If the Yankees make this trade with the Braves, they will gain some bonus pool space to make sure they can get Molina. They should also have enough money to add at least one other premium international prospect.

Would you be willing to trade Joba to the Braves or Giants for additional international free agent bonus pool money? If so, how much would you ask for?