After drafting two college position players with their first two picks in the first round of the 2013 MLB Draft, the Yankees used their final selection in the first round on California high school lefty Ian Clarkin. Clarkin is a senior at Madison High School in San Diego with a commitment to play for the University of San Diego next season. The Yankees will likely need to cough up some extra dough to throw his way to keep him out of college. Considering that the Yankees previously drafted Jonathan Gray and Gerrit Cole, if Clarkin ends up turning down their offer, he'll probably end up going at the top of the draft in a few years, because that's how these things have been going. 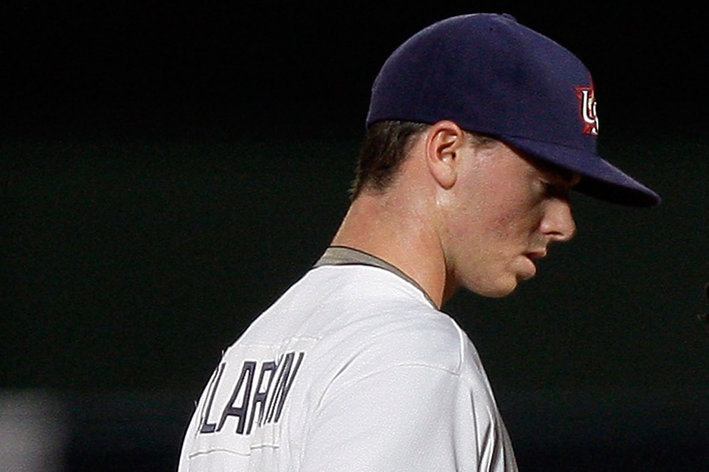 Can this high school lefty live up to comparisons of Clayton Kershaw?

Clarkin is a 6'2" left-hander with a 90-94 mph fastball that he is able to throw on a downward plane. He has a bit of a funky, over-exaggerated leg kick that causes him to work a little harder than necessary. The pitch that everyone is in love with his Clarkin's curveball, which is being called the best among high school pitchers in this year's draft, that routinely causes hitters to swing-and-miss. Clarkin possesses top-of-the-rotation stuff, but his change-up is still a work in progress that he will need to continue develop more to remain a starter with three pitches.

Baseball America and MLB.com's Jonathan Mayo had Clarkin being drafted at 17th and 18th, respectively, which could give you an indication that he plans to play hardball with the Yankees over how much money it will take to have him pass on his hometown school in San Diego. ESPN's Keith Law had Clarkin ranked as the second-best high school lefty in the draft. If the Yankees do have to come up with extra money, it may make their perceived reach in the second round make a little more sense.

In his final year of high school, Clarkin pitched to a 0.95 ERA in nine wins for Madison High School. He struck out 133 batters over the course of the season and allowed only 13 runs all year. Clarkin pitched in the 2012 Perfect Game All-American Classic, as well as pitched for the U18 Team USA team that defeated Canada to earn the gold medal last year. In the gold medal game, Clarkin allowed only four hits and two runs in six innings.

Clarkin has drawn comparisons from Clayton Kershaw to Ian Kennedy. Obviously, we're all hoping for a lot of the former and not a ton of the latter. He may not have endeared himself to many Yankee fans when one of his first comments after being drafted was that he couldn't stand the Yankees as a kid, but I'm sure it's nothing that a million dollars or so couldn't smooth over. After falling further than he was projected to, it will be interesting to monitor whether or not the Yankees can do enough to get Clarkin to sign with them. The system is pretty low on lefty pitchers with any real future in the major leagues, and adding Clarkin to that mix would be a big boost, considering how friendly Yankee Stadium is to lefty pitchers.

What they're saying about him:

"Ian Clarkin is a combination of the things we were looking for. He's a left-handed pitcher with plus velocity and has a plus curveball. On top of that, he's a tireless worker. We think we got something special with him."

"His change is still a show-me offering, which he'll have to improve to remain a starter. The raw material is very strong, so even with some late-season inconsistency he should be among the first few prep lefties drafted."

"The best I saw him was with a 94 mph fastball and a potential plus-plus breaking ball at 72-75 mph. It looked unhittable and unfair at times. It's elite level when on. He has higher potential than many in the draft, though a lot of it depends on command and that curveball."