Mark Teixeira injury: Are the main targets on the first base trade market all they're cracked up to be?

Lyle Overbay is underwhelming, but who isn't these days? It's an ugly scene in Tex's absence.

Share All sharing options for: Mark Teixeira injury: Are the main targets on the first base trade market all they're cracked up to be?

First base has been a tremendous position of power in Yankees history. They have employed arguably the greatest to ever play the game in Lou Gehrig in addition to All-Stars Moose Skowron, Chris Chambliss, Tino Martinez, Jason Giambi, and near-Hall of Famer Don Mattingly. Unfortunately for this long tradition, the 2013 iteration of Yankee first baseman is one of the worst in team history thanks to Mark Teixeira's wrist injury and an over-reliance on an over-the-hill Lyle Overbay. In the 69 seasons since World War II, they are the fourth-worst group to have donned the pinstripes by OPS:

First base was a real cesspool of suck the two years before Donnie Baseball came along, and 30 years later, the Yankees are back to that position. Tex is gone for the season due to season-ending surgery on his torn wrist tendon sheath. There are no legitimate first base prospects even close to the majors; Scranton's best options are Quad-A players Dan Johnson and Randy Ruiz, who are likely both worse than Overbay (check out Tanya's post for more on internal options). Thus, the Yankees are almost forced to turn their eyes to the trade market unless they want to stick with Overbay. The most popular candidates seem to be veterans Justin Morneau, Carlos Pena, and Paul Konerko, players on non-contenders who all have expiring contracts.

Do Morneau, Pena, or Konerko necessarily represent much of an improvement on Overbay though?

It seems that standard procedure for first basemen in photoshoots is to look forlorn. Bummer. More importantly, none of these players are really producing standout seasons; all rank below league average according to wRC+.

Konerko's line is particularly appalling since unlike the other three, he doesn't even have solid defense anymore. Just a year ago, he hit .298/.371/.486 with 26 homers and a 131 wRC+. He turned 37 in March, but his play on the field has made him appear far older. He's the captain of the White Sox and their longest-tenured player, having played on the south side of Chicago since the days of Y2K paranoia. Nonetheless, it would be hard for the White Sox not to at least consider dealing him away for salary relief from his $13.5 million and a prospect or two. At the moment though, he does not look like an attractive trade candidate. Overbay's superior defense and power make up for the difference in batting average and on-base percentage.

The only argument I could see for Konerko joining the Yankees is that he can still mash southpaws. He's the sole righthanded hitter of this group, and he's hitting a far-better .286/.385/.518 with a 142 wRC+ against lefties this year, albeit in just 65 plate appearances. That's not a huge sample size from which to draw conclusions, but it's something. As Jason suggested last week, the Yankees could try a platoon with Konerko and Overbay, who is hitting .255/.302/.466 with a 106 wRC+ against righties (nothing awesome, but solid power). Given his limitations, the Yankees probably shouldn't trade for Konerko unless the White Sox are willing to accept a mediocre-to-poor player/prospect return.

Both Pena and Morneau represent more intriguing options since their platoon splits are not nearly as drastic as those of Konerko and Overbay. Although the 32-year-old Morneau's power has suddenly disappeared, he still gets on base fairly often, and he has 18 doubles in 68 games to his name. Target Field can be a bitch of a place for lefty hitters like Morneau (it was rated fourth-worst in homers for lefties in FanGraphs' 2012 park factors), so perhaps his power would get an uptick from playing half his games at Yankee Stadium. The doubles and .383 slugging percentage provide some evidence that the power has not completely vanished. He's hit .293/.348/.418 with a 111 wRC+ against righties and .256/.291/.305 with a 64 wRC+ against lefties. That's a crappy triple slash against lefties, but keep in mind that Overbay is at a dreadful .197/.229/.333 with a 46 wRC+.

Although Morneau has been a career Twin since his debut in 2003, it would be surprising for a bad team like the Twins to hang onto him as his contract expires and his $14 million salary goes out the door. The question for the Yankees again comes down to what the Twins would want in return. He's an improvement over Overbay, but not such a dramatic improvement that he would likely be worth an important prospect. Due to concussions and other injuries, last season was also his first of more than 130 games since 2009. Proceed with caution.

Pena is the cheapest non-Overbay option out of the group. He still hits for low average and whiffs like a bandit, but he draws enough walks and has enough power to match Morneau's wRC+. The 35-year-old Pena's defense has never been a problem, and after struggling against lefties for the past few years, he has turned it around and now has a weird reverse-split like Brennan Boesch. This year, Pena has hit .240/.367/.500 with a 141 wRC+ against lefties and .216/.318/.351 with an 85 wRC+ against righties. Those numbers represent the best platoon split out of this quartet, and his statistics against righties probably won't stay around that level given his career trends. Of course, that also means his numbers against lefties will regress since it's likely just small sample size noise in 60 plate appearances, but the fact that he doesn't appear helpless offers some hope anyway.

The Astros are only paying Pena $2.9 million this year, and since they are in complete scorch-the-earth mode, they will almost certainly deal him away for prospects at the trade deadline. Unlike Morneau, Pena offers consistency and decent assurance that he will stay on the field, as he has never missed much playing time due to injury. However, since the Astros are rebuilding, don't really need salary relief, and are hoping to add decent prospects to their future squads, they might ask for more than the White Sox or Twins would for their first basemen. Brian Cashman will have to carefully evaluate which, if any, prospects he would be willing to deal for a rental.

Others: Morales and Hart

The only other interesting first base option on a crappy team is switch-hitting Kendrys Morales of the Mariners, who is having a better season than any of these schmucks. Morales is hitting .271/.330/.430 with a 114 wRC+. (Above league-average? What is this?!) Morales only turned 30 on June 20 though, and the Mariners might want to keep the soon-to-be free agent around. His superior offensive numbers and comparatively cheap salary ($5.2 million) would make him a tougher player to acquire.

Righthanded hitter Corey Hart of the Brewers is also an option, but while he's notched a wRC+ of at least 125 each of the past three years, he hasn't played a game in 2013 due to knee surgery. Hart has had some setbacks, and the Brew Crew isn't even confident that they will get him back immediately after the All-Star break. Should the Yankees really gamble on another injured player?

The Yankees are stuck with Overbay with Teixeira falling victim to season-ending surgery, and the trade market does not really provide any dramatic improvements. Somewhere in the great beyond, Lou Gehrig just heaved a big sigh of exasperation. This season has been a punch to the gut for Yankees first base lore, and even Andy Phillips is having a nice laugh. Are any of these men on the trade market even worth it?

Maybe the Yankees would just be better off with Scranton's porcupine mascot Quills at first base, at Matt Ferenchick's recommendation: 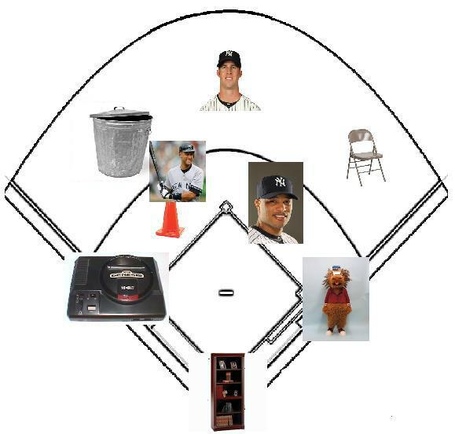