The Yankees are questioning Robinson Cano's ability to draw a crowd, when winning leads to greater attendance figures. The Yankees might want to think about surrounding Cano with a better team.

After Tanya wrote over the weekend about an apparently misguided Yankee executive questioning whether Robinson Cano could draw fans to Yankee Stadium, it got me thinking, maybe the executive has a point. Of course he only has a point if his completed quote had been only partial and the full quote was "you think anybody buys a ticket to see Robbie Cano…so long as we keep surrounding him with this garbage." Maybe if that was the quote it would make sense.

I’m cherry-picking a bit here, but earlier this season, these were the six position players that followed Robinson Cano in the lineup: Vernon Wells, Lyle Overbay, David Adams, Ichiro Suzuki, Reid Brignac, and Chris Stewart. In Spring Training, that lineup might have gotten a review and a fine from Bud Selig for not bringing enough projected starters to the game. If Yankee executives are upset with attendance and ratings, the appropriate conclusion is not that they need stars like Derek Jeter and Alex Rodriguez playing, the appropriate conclusion is that they need decent baseball players like Derek Jeter and Alex Rodriguez playing instead of Jayson Nix and Reid Brignac filling their spots in the lineup.

Yankee Official: Do you think anyone buys a ticket to see Robbie Cano? 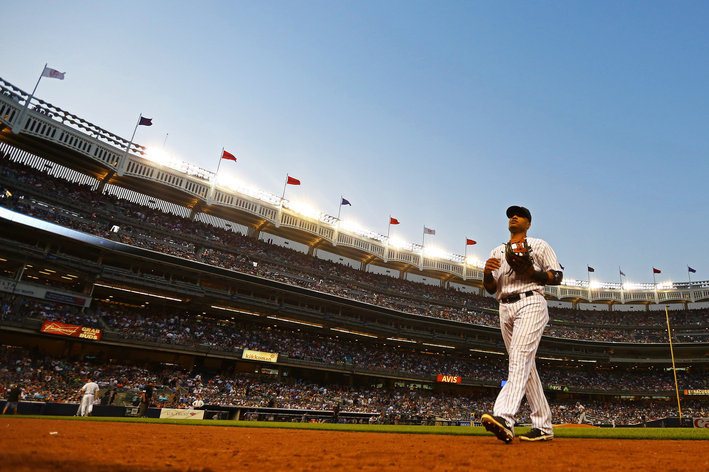 Joel Sherman poses the idea that maybe the Yankees are reluctant because Cano doesn't bring the superstar factor that someone like Alex Rodriguez does.

Attendance is based on winning and expectations. In this study, wins equal attendance, and wins from the previous year are even more closely associated with attendance the following year. People assume if you were good last year, then you will be good again. It takes awhile for people to realize that a surprising team is good during the season. Now, the Yankees were good last year, but a disastrous offseason letting Nick Swisher and Russell Martin walk without adequate replacements, and injuries to A-Rod, Jeter, as well as Mark Teixeira and Curtis Granderson, sent expectations downward and the attendance appears to have taken a hit as a result.

However, it is time for a little perspective. Did you know the Yankees' average attendance in 1996 was 27,789? It took awhile for winning and expectations to get built up. Here’s a look at a graph of attendance from 1996 through this year.

Even if attendance stays where it is this year at 39,103 (and it won’t by the way, it will go up), that will still be higher than the World Series year of 2000. If you noticed in the chart above, there is a drop-off in 2009 which is a result of the new stadium having a lower capacity. Here’s a chart showing the capacity percentage since 1996.

Over the past 15 years, the Yankees have built a culture of winning and high expectations. Over the past few seasons, fans have begun to question just how committed the Yankees are to sustaining that culture and the lineups that have been forward so far this season are a testament to those concerns. The Yankees' surprising start and potential injury reinforcements arriving and hopefully on the way should help the Yankees to another successful year, but the organization is cutting things close and expectations are lower as a result. The Yankees should not spend their time questioning Robinson Cano’s reputation when theirs is the one far more at risk.