Take a look at the platoon splits of the Yankees' top hitting prospects and see who can hit who.

Many major league players have platoon splits. Either they hit lefties better or they hit righties better and that is almost always based on what side of the plate they hit from. Those splits are often first evident in the minor leagues, however, until recently, that information has been hard to come by. Now Baseball-Reference has added platoon splits to prospect profiles and we can see who is developing positively or negatively against different handed players. Yankee prospects have platoon splits just like everyone else.

The switch hitting Zoilo Almonte has an even split against right-handers (.263/.327/.441) and left-handers (.274/.333/.398) from 2008-2012. Despite the overall career line he has been hurt by alternating good and bad years against lefties. The one glaring difference in his splits is that his right-handed swing looks to be his power swing, as he has 50 home runs from that side of the plate against 10 on the left side. Right now he is OPSing .907 against right-handers, but only .658 against left-handers. That will have to be corrected if he wants to have a successful season as a switch hitter. 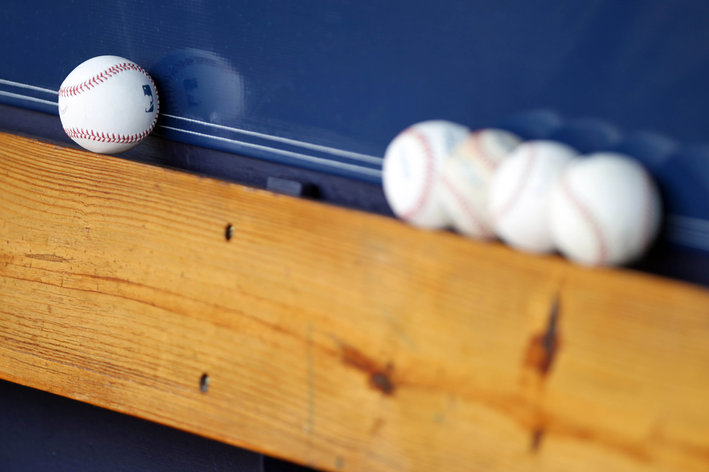 A tough break for such a promising pitcher

As a right-hander, Tyler Austin has crushed everything against right-handed pitching. He has a .361/.421/.603 line against them between 2011-2012. However, he has been troubled by left-handed pitching, and while his .280/.381/.482 might not be feeble, he has certainly lacked power against them. Against righties he has accumulated 42 doubles, five triples and 17 home runs, but only 11 doubles, three triples and six home runs against lefties. Austin has yet to blast off this season so his lines have been equally underwhelming at this point. He does have 16 walks against right-handers when he had 33 against them last season.

Dante Bichette Jr has been pretty horrendous since coming off of his amazing start to his professional career. It might be due to his inability to hit right-handed pitching as a right-handed batter. He has hit .274/.365/.385 against them between 2011-2012 and since a majoriy of pitchers are righties that will be a problem for him if he wants to have a career. His one saving grace is his ability to beat up left-handers with a .336/.419/.507 line. Most of his success has come from his 2011 season where he OPS'd .892 against RHP and 1.095 against LHP, but in 2012 he dropped to .609 and .756, respectively. 2013 has proved to be no better for his career against righties, as he has a .493 OPS against them, but at least he has put up a .715 against southpaws in the early goings.

Light hitting shortstop Cito Culver hasn't been able to hit much of anything in his professional career between 2010-2012. Traditionally, batters hit opposite handed hitters better than same handed pitchers, so a switch hitter is supposed have the advantage in every situation. He currently has a career line of .229/.313/.323 against righties and .256/.348/.300 against lefties. Culver has been so bad as a switch hitter that the Yankees have made him abandon his left-handed swing so he can focus on hitting right-handed only. That will hopefully help him decrease his strikeouts (152 vs. 60), but will also diminish his walk rate (89 vs. 33). In 2013 he seems to still be walking and striking out against right-handers, but isn't doing much else.

Between 2010-2012 Slade Heathcott has a solid .289/.369/.445 line against righties as a left-handed hitter. At the same time he has a .262/.349/.353 against lefties, which is fine in it's own right, however the biggest difference in his splits is a severe drop in power. Through those three seasons he has 30 doubles, eight triples and 11 home runs against right-handers, but only 15 doubles, one triple and one home run against southpaws. Thankfully, he can still hit, but the lack of power might shoehorn him into a platoon role if he can't improve. As of right now Heathcott is struggling mightily in 2013 with an OPS of .547 against righties and .614 against lefties.

From 2010-2012, JR Murphy has hit left-handers while his abilities against right-handers have been below average. The righty hits .253/.320/.374 against same-sided opponents, but .296/.334/.483 against opposite-handed opponents. His line against southpaws is mostly skewed by an incredible 2011 season, where he hit .367/.392/.318, but he actually had a worse line against them than he did against right-handers in 2012. So far Murphy's offensive talents have varied from year to year, but he has started off strong with a .933 OPS against right-handers and a 1.110 OPS against left-handers. Hopefully his 2013 season will finally indicate what kind of hitter he will end up being.

Ronnier Mustelier is no prospect at the age of 28, but the right-hander has hit at every level in his short American baseball career between 2011-2012. He has a .334/.380/.481 line against righties and a .336/.390/.563 against lefties, which is pretty tremendous. That might look impressive, but he will likely never hit at that level in the majors, if he can ever make it there. He has just returned from injury to begin his 2013 season, but his ability to hit left-handed pitching is what should make him most enticing to the Yankees' depleted lineup.

Austin Romine has been called up to the majors to replace the injured Francisco Cervelli, but has only had four plate appearances. The right-hander has been below average against righties based on his .240/.303/.348 line, but his .351/.405/.565 proves he has been very successful against lefties between 2008-2012. Before being called up he had actually been OPSing .877 against righties and only .364 against lefties under the pretense of a small sample size, but if his career line is to be believed, he should, at least, be the starting catcher against left-handed pitching. Chris Stewart has hit .234/.305/.339 against lefties for his career, so it's not like there would be any harm in trying.

Catching prospect Gary Sanchez is a right-handed batter who has beaten up left-handed pitching to the tune of .312/.363/.546, but that's almost to be expected. He's also not too shabby against righties with a .283/.354/.454 line between 2010-2012. He actually gets most of his home runs (25 vs. 18) and walks (60 vs. 22) against them, so he's a very well balanced hitter at this point. He is currently hitting .272/.368/.444 against righties, but only has seven hits against left-handers in 33 plate appearances. Of those seven, two have been doubles and two have been home runs, so his slugging percentage is at .500. It will take time to see if this sample size is misleading or not.

Lightning in a bottle

Travis Hafner is the Yankees' most surprising player