When Brett Marshall threw over 100 pitches last night, a quick look at the Yankees' 40-man roster indicated this move was likely coming. With Marshall to be unavailable for the next few days, Vidal Nuno already in Triple-A without the potential to be recalled immediately, and Adam Warren having thrown three innings on Monday, the Yankees needed a long man in their bullpen. Only one pitcher stood out as a likely option with a spot on the 40, and that was Betances. 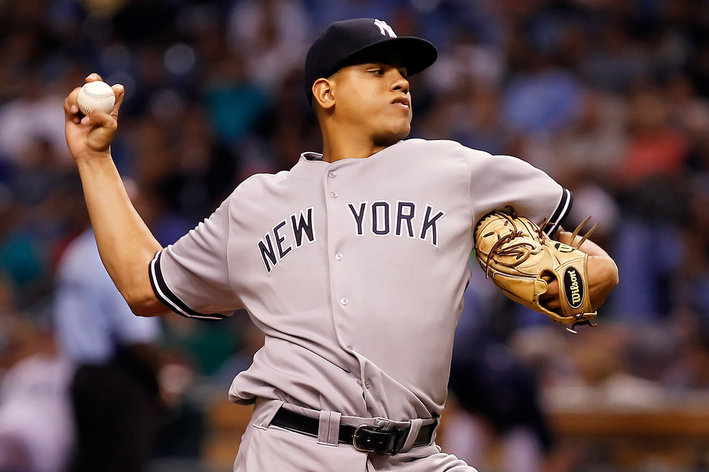 Come on a journey down the rabbit hole of the minor-league career of perhaps the Yankees' most bizarre pitching prospect.

You know the tale of Betances by now. Part of the infamous Killer B's who, like fellow B and former Yankee prospect, Andrew Brackman, seems to not really know where the ball is going more often than not. He's been demoted to Double-A without improvement, and now he's been moved to Scranton/Wilkes-Barre's bullpen because he nearly out of options. He's not making it as a starter, so they are trying to have him make it any way that they can.

In 28.1 innings for the RailRiders this season, Betances has a 5.40 ERA with 29 strikeouts and 17 walks issued. Every once in a while, he'll look like he might have changed something that will elevate him back to the status the Yankees once dreamed of before turning around and breaking your heart again next time out. It's easier to expect nothing from him at this point and hope that you find yourself pleasantly surprised.

Perhaps his move to the bullpen will turn things around for him. He certainly wouldn't be the first to benefit from the move. He'll get a chance to showcase the stuff that made him such a promising prospect at one point at the big league level, at least for the next few days.

Dellin Betances has been moved to the bullpen