After Game One of the doubleheader against the Cleveland Indians it was announced that Brennan Boesch was optioned down to Triple-A and pitcher Brett Marshall was called up. This sounds like a simple move to get an extra pitcher onto the team for the second game, since Corban Joseph was already called up as the 26th man, and will be sent back down soon after. It also has implications for the return of Curtis Granderson. 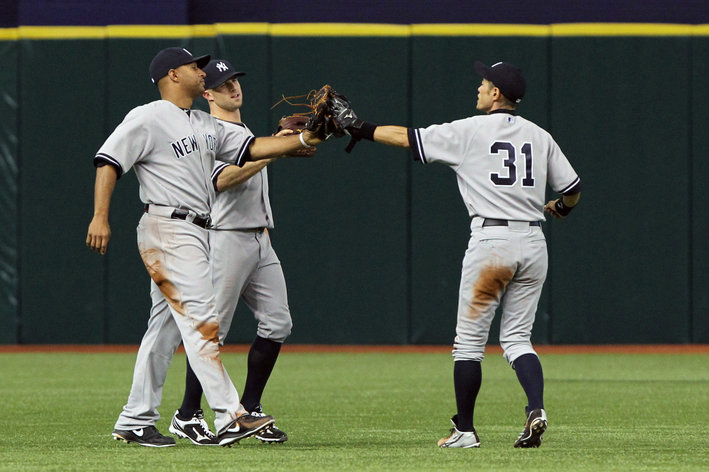 Who sits and who starts?

Brennan Boesch has seen very little action in 2013 and seemed unlikely to get anymore playing time. He was also not very successful, hitting .205/.244/.680 in only 39 at bats with two home runs. As a left-handed batter Boesch has shown a reverse platoon split over his career, mean he has hit lefties better than righties, yet Joe Girardi chose to use Ben Francisco against lefties.

It had been previously believed that Curtis Granderson would continue to rehab with the Scranton/Wilkes-Barre RailRiders throughout their homestand, ending on Monday, making Tuesday the likely date for his return. Yankee fans everywhere would have probably preferred Francisco be designated for assignment to make room for Granderson on the 25-man roster and someone like David Adams on the 40-man roster before they call him up on Wednesday May 15th. However, considering the Yankees' fear of losing veteran depth through waivers, the optioning of Boesch was the more likely move. By Tuesday the Yankees' outfield could be Granderson, Brett Gardner, Vernon Wells, Ichiro Suzuki, and Francisco (for now).

The story of the Evil Empire is entertaining