The injury bug strikes even the babiest of baby bombers!

LoHud gave a rundown on the Yankee prospects deal with injuries.

Manny Banuelos is recovering from Tommy John surgery that will keep him out of the 2013 season. He has been doing long toss and is nearing a return to the mound. It's good to see he's coming along nicely and if he can get into pitching form by the end of the season he will be able to play winter ball to get some of the rust out of his system. He'll be 23 in Triple-A next season, so his quick rise through the system has given him the ability to miss a year and still be on schedule, age-wise. 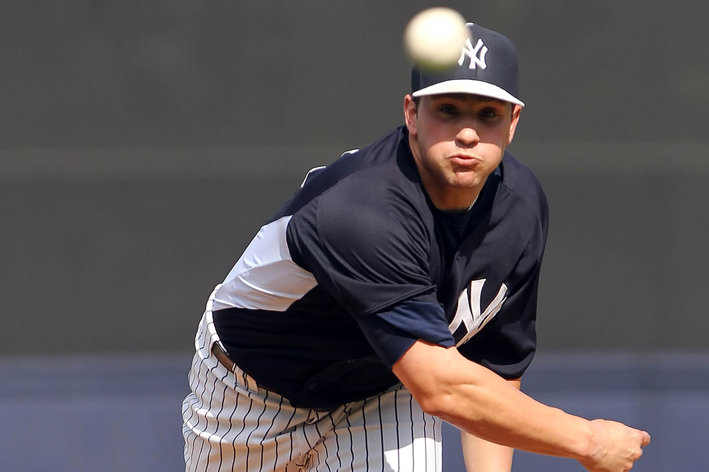 Vice President of Baseball Operations Mark Newman dishes on a few prospects down on the farm.

Adonis Garcia was part of the outfield competition in spring training before he broke his hamate bone while swinging a bat. He has been taking batting practice, but has yet to appear in any extended spring training games. The 28-year-old played his first season in America last year and hit .263/.311/.424 between High-A Tampa and Double-A Trenton.

Second baseman Angelo Gumbs only played a handful of games for Low-A Charleston before he missed time with a sprained right middle finger. He is now playing in extended spring training games and should be activated in a few weeks. He only had three hits in 36 plate appearances before he went down.

Ravel Santana suffered a nasty ankle injury in 2011 and has yet to fully recover. He returned to the field last season, but was still not 100% so the organization is taking it slow with him. The 21-year-old is playing in extended spring training and has not yet been higher than Short Season-A Staten Island.

Reliever Chase Whitley has been down with an oblique strain since late in spring training. He is now throwing in extended spring training games and will be activated in around 10 days. In 2012 he pitched a combined 84.1 innings between Double-A Trenton and Triple-A Scranton.

The Yankees' 2012 first round draft pick, Ty Hensley, had surgery on his hip and is done for the year. So far he has 12 innings to his professional career where he had an ERA of 3.00 and a K/9 of 10.5 in rookie ball. His mother actually went on River Avenue Blues and posted about his hip injury (sorry for the wall of text):

Now let's cut to the chase... Ty's hip condition has nothing to do with the shoulder non-injury issue that was discovered after the draft. For inquiring minds...Ty hates the word "abnormality" and he thanks me all the time for that one. We just didn't know what to call it at the time so that's the word we used in the press release. He has a sublabral foreman. It is a congenital condition that is present in less than 5% of the population. You can do the research and see why at first glance it caused the Yankees concern. We didn't know he had it and there are no symptoms. It is a normal variant of the labrum that because of it's rarity there just isn't a lot of experience with, nothing to compare it to. It works for Ty. He has never had any soreness in his shoulder, no laticity, sits 92-94 and tops out 97-98. It took 5 of the best doctors in the US to reach that diagnosis. If you think a scouting department could have known about that prior to draft day you are crazy. In addition if you think parents are going to subject their asymptomatic kids to contrast MRI's to find things you are as equally crazy as that is medically unethical. The Yankees were at every single one of Ty's games, as were all the clubs that were in the mix, he had a better then normal physical exam and his medical history was squeaky clean...he never even had a broken bone..pretty remarkable for kid who had been playing three sports competitively since he was 5. For those that don't know 2012 was the first year we had to submit medical records before the draft. All the teams received copies of any primary care records along with xrays, mris, and medications. The Yankees did their job with Ty and he was just glad to get the shoulder thing put behind him and show everyone what he he had. Then in what was his last outing in the DR he strained an AB pretty bad. He recovered came back to ST and in his first outing struck out the first three guys he faced and blew out another ab and that's when we discovered he had FAI. You can look up the medical jargon. Apparently since about 15 or so due to his rapid growth and playing sports year round his abs have been doing all the work his hips should have been doing because they could not rotate in the socket. Abs heal just fine...and Ty's recovery on his hip has been awesome! He is 19 and Dr. Kelly is amazing. Discovering this now probably gave him years on his career. It is actually odd that the abs compensate for the hips it's usually the arm in pitchers The UCL or R Cuff a lot of times pays the price. All Ty wants to do is play ball and impact people's lives that's it. He is more determined to do that then ever. So you might call him and these other prospects a bust because of their misfortune. I don't know the ultimate plan for them , but I do know that those guys could probably all teach most of us a thing or two about commitment, winning, and over-coming adversity.

There are several other Yankee injuries that were not mentioned on LoHud.

Reliever Nick Goody had Tommy John surgery last month and will miss the rest of the season along with, at least, most of next season. The 2011 draftee was being hurried through the system as another high strikeout reliever, like Mark Montgomery and David Robertson. He had been pitching in High-A Tampa in only his second professional season and has a 14.1 K/9 since 2011.

Catching prospect Kyle Higashioka required Tommy John surgery only seven games into his season. The 23-year-old was in Double-A Trenton, but will miss the rest of the season. The recovery time for Tommy John surgery is a lot less for position players than pitchers, so he will be back sooner than it normally takes.

Rob Segedin had hip surgery to repair the same injury that Alex Rodriguez had suffered and will be out for the season. The third round draft pick from 2010 has moved from third base to outfield and back to third base through four seasons and was hitting .338/.390/.606 in 18 games at Double-A Trenton.

What in the world is a Refsnyder?