Yankees 14, Indians 1: So, the Yankees did well today

Andy Pettitte continues to be amazing at baseball. Oh and the offense had a pretty good day itself.

Share All sharing options for: Yankees 14, Indians 1: So, the Yankees did well today

Where on earth do I even start?

The Yankees' offense picked up where they left off from the last two games, smashing the Indians around for 14 runs. And then there's Andy Pettitte. What is there left to even say about Andy? He went seven innings, allowing just one run on five hits, walking three and striking out four.

Brett Gardner immediately set the tone of the game by leading it off with a double. While the Yankees ended up stranding him and Robinson Cano, who reached on an error, it wouldn't be long before they put runs on the board.

In the top of the second, Vernon Wells reached on an error by Mike Aviles to start the inning. Ichiro Suzuki immediately erased that by grounding into a double play, but the Yankees weren't done. Next up was Eduardo Nunez, who singled. Then was Lyle Overbay who singled, and after that, Francisco Cervelli drew a walk. It was back around to Gardner, who singled to score Nunez and Overbay. Up next was Robinson Cano. Bob continued his hot hitting from yesterday throughout the game, but in this spot he doubled to score Cervelli and Gardner, making it 4-0.

From there, it only got worse for the Indians. In the third, Ichiro hit a solo home run to make it 5-0. Then in the fourth, Cano hit a two-run home run, bringing home Gardner, who had walked, and the score was 7-0. On the next pitch, Indians starter Carlos Carrasco hit Kevin Youkilis with a pitch and was immediately thrown out by home plate ump Jordan Baker. Maybe a bit harsh to do that immediately with no warnings, but the Yankees didn't retaliate and that seemed to be the end of it. So, good job, Jordan Baker. After that the Indians brought in Brett Myers. That didn't change much.

GIF of the Game: Revenge of the Youk

Two innings later, Youkilis got into the act, hitting a two run home run, bringing home Gardner, who doubled, to make it 9-0.

But throughout all the offense, Andy Pettitte continued rolling in the bottom half of the innings. The Indians' only run came on an Asdrubal Cabrera home run in the bottom of the sixth. And while there were other times where the Indians had runners in scoring position, in typical Andy Pettitte style, they never seemed to really threaten. He is the best. 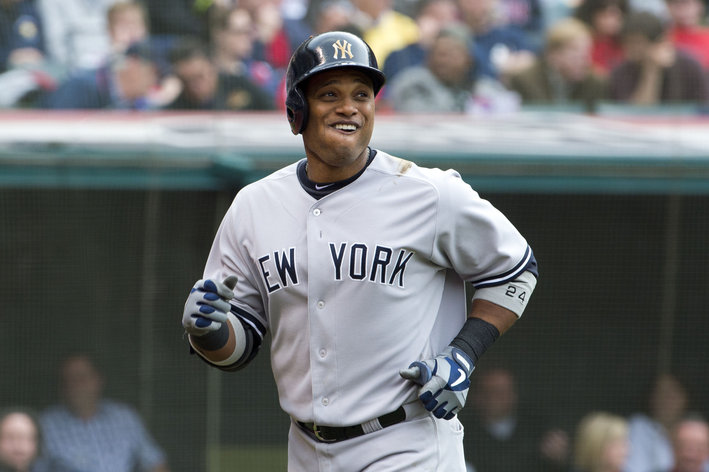 Much ado about batting second, where taking one hitter out of a "run-producing spot" creates a run-producing opportunity for everyone else.

The game turned into a real beatdown in the eighth inning when the Yankees added another four innings. While Cano added another double and a RBI to his line, Lyle Overbay and Brennan Boesch got into the act, each hitting a home run, putting the game well and truly out of reach. They added one last run in the ninth when Francisco Cervelli doubled home Overbay, who had doubled himself.

Adam Warren got the last six outs for the Yankees with minimal trouble, and the game finished 14-1.

In addition to Pettitte, the other best performance came from Robinson Cano who went 4-for-6 with a home run, two doubles and five RBI. Brett Gardner had his best game of the season so far as he went 4-for-5 with a walk, two RBI and three runs scored. Lyle Overbay went 3-5. Every Yankee starter recorded at least one hit, minus Travis Hafner, and they finished with 18 as a team.

The third game of the four game set against the Indians is tomorrow at 7:05 Eastern. Ivan Nova gets the start. Is there an upcoming TV bubble for MLB?

It's Gary Sanchez or bust for the Yankees