Much ado about batting second, where taking one hitter out of a "run-producing spot" creates a run-producing opportunity for everyone else.

It's idiotic to trifle about batting orders in terms of some alchemical run-producing hocus pocus that they're supposed to create. Today, Kevin Kernan of the New York Post went on at great length about how Robinson Cano had just two RBIs on Monday "because he was moved out of a run-producing spot." There is no such thing, there is only coming up with runners on and coming up with the bases empty. A hitter who bats behind hitters who get on base will drive in a lot of runs no matter where he's positioned in the lineup. A hitter who doesn't won't.

When Don Mattingly won the American League MVP award in 1985, Billy Martin gave him 58 starts/274 plate appearances in the second spot in the order. On any given day, Rickey Henderson walked or singled, stole second, and then Mattingly singled or doubled him home. Yankees 1, Opposition 0 in the first inning. The number-two position was "a run-producing spot" because Martin and Mattingly made it one.

The batting order's main function is distributing playing time. A team's leadoff hitter will bat more than any other hitter on the team over the course of the season. The number-two hitter will bat a little less often than hit and a little more often than the number-three hitter, and so on down the line. Joe Girardi clearly knows this, because when he was asked yesterday about batting Cano second, he said, "We needed him to hit there to get these guys as many at-bats as they can get."

Given the current weakness of the team's batting order, with so many quality hitters out, it makes sense that Girardi would try to maximize what little he has left by getting his best hitter as many at-bats as possible. Beyond that, the alchemy will take care of itself. Gardner is no Henderson, but Cano does a pretty good Mattingly impression at times, and between the two they should be able to put together a reasonable facsimile of that duo's interactions. What's more, if Cano gets hot than his productivity will ripple down the batting order, making Kevin Youkilis's number-three spot the run-producing spot it traditionally is, and ditto Travis Hafner's fourth spot and Vernon Well's five. 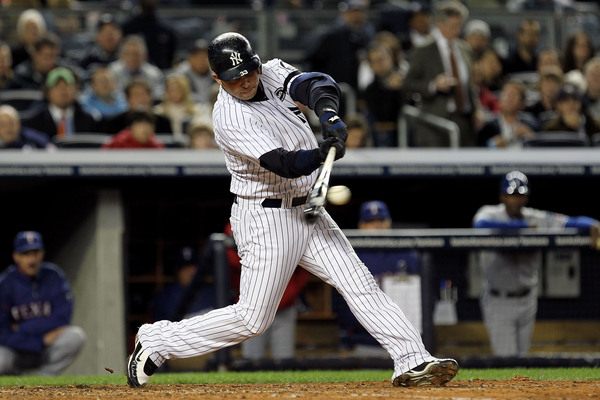 To return to the 1980s for a moment, one of the best players on the Red Sox at that time was right fielder Dwight Evans. A career .272/.370/.470 hitter playing in an era when those rates really meant something, at his best he was good for 90 to 110 walks and 30 home runs a year. That's a cleanup hitter, right? Someone you put in "a run-producing spot?" Well, the Red Sox didn't use him that way. Evans batted second quite often, hitting between Wade Boggs and Jim Rice. In 1984 he batted second in every game he played and drove in 104 runs. Another manager would have put a light-hitting middle infielder up in that spot and dropped Evans behind him, which makes absolutely no sense other than that it corresponds to our received notion of what a batting order should look like. Girardi was doing exactly the same thing with a broadly similar player when he batted Nick Swisher second in 52 games last year.

So, please, let's leave this batting order stuff alone. The Yankees have enough actual problems this year without the press making mountains out of molehills. In fact, this is so much of a non-issue it's the opposite of a molehill -- it's a depression, the inverted nipple of baseball. Do us all a favor and stop tugging on it.