Yankees 4, Red Sox 2: Andy wins. Mo saves. All is right with the world.

Andy Pettitte pitched fantastic baseball. Mariano Rivera came in to get the save. You've seen this before. You won't see it again after this year is over. Enjoy it.

Share All sharing options for: Yankees 4, Red Sox 2: Andy wins. Mo saves. All is right with the world.

In a personal screw you to ESPN and all the naysayers and doomgloomers out there, the Yankees avoided the sweep tonight against the Scott from Scotts mascot Red Sox with a 4-2 victory. Great pitching and timely offense would win the game for the Yankees this day. It's a good formula.

GIF of the Game: The Cervelli Show

Since we all love Andy Pettitte, let's start with his performance tonight. You've seen this performance before. Pettitte went eight innings, allowing eight hits and one earned run while striking out three and walking one. Andy did what Andy does best when he gets into jams; serve up the patented Andy Pettitte double play special. He got the Red Sox to hit into three double plays tonight. Typical Andy Pettitte efficient pitching. It was exactly what the Yankees needed tonight after the last two games. Mariano Rivera would then do what he was born to do; come in and save the game for the Yankees and assure their victory. Fun fact from fellow Pinstriped Bible scribe William:

At a combined 85 years, 54 days, Mariano Rivera and Andy Pettitte are the oldest pair of Yankees to record a win and save in the same game.

The morning after: Notes from Section 421 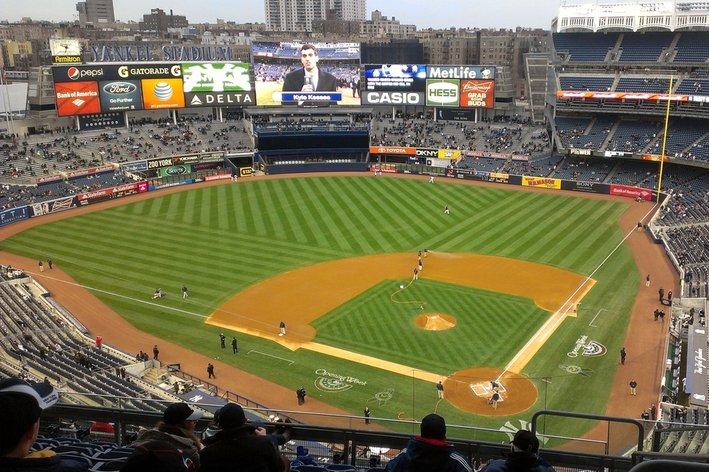 PB's own Keith DeCandido went to the game and offered us some thoughts on the Yanks' first victory.

Meanwhile the offense was... different. Unexpected? Surprising? I'm trying to find the proper word to describe what we witnessed tonight. First up to bat, Lyle Overbay. With Travis Hafner on third and Eduardo Nunez on second after he hit a grounds rule double, Lyle Overbay hit a blooper into left-center to drive them in and giving the Yankees their first lead of the season. Next up to bat, Gritty Gutty Brett Gardner. The next inning, swinging at the first pitch, he would hit a typical short porch dinger which made the score 3-0. Live and die by the porch, I always say. Finally up at the plate, Francisco Cervelli. No short porch home run for him. His dinger was a monster shot into the opposing team bullpen, nearly going into the left field bleachers. Look, his defense is better and he seems to be seeing the ball really well. Start him over Stewart. Now.

The baserunning still needs some work. I'm looking at you, Brett Gardner. Always. However, this was a very encouraging sign from the Yankees tonight. Good pitching, good offense, and good defense will keep you in the game. Just do that for the entire season and you'll be fine. Except for the dingers. Dingers bad. Small ball good.

Tomorrow the Yankees will head to Detroit. Ivan Nova will face Doug Fister. The game starts at 1PM.

Cervelli tagging Victorino in the face