The real value of making predictions

...and how I got toasted before the season even started.

Share All sharing options for: The real value of making predictions

On March 28, 2013, this article was posted giving the staff’s season predictions. On March 29, 2013, one of mine was already toast, as David Aarsdma was released by the Yankees before the season even started. I had picked him to have the most appearances out of the bullpen for the Yanks this year. Now, to be totally upfront, it’s not like I did research to make these predictions. I was actually trying to wrap up the research for this article at the same time. So my time was limited to really think about this stuff more than a few minutes. I also wanted to try and come up with something a bit more interesting than just Mariano Rivera’s primary set-up reliever. Still, the season hadn’t even started! How did I whiff on this one that badly?

I always like to analyze mistakes I made in the perhaps fruitless hope of actually learning something that makes me better at whatever I’m doing. Now, I don’t expect to become the next great Carnac The Magnificent, but that big of a whiff suggests I should have known something better right off the bat. So what was I thinking? I was thinking that Joe tends to protect his best relief pitchers, saving them for that potential higher leverage situation that may or may not ever come. With that in mind, I figured you want to pick the second best guy after Mo; not only because Joe is afraid of the future, but he’s equally afraid of the present getting out of hand. Hence, save the best until later, but don’t risk bringing in the bottom half of the pen unless it’s mop up time. This was my first mistake. 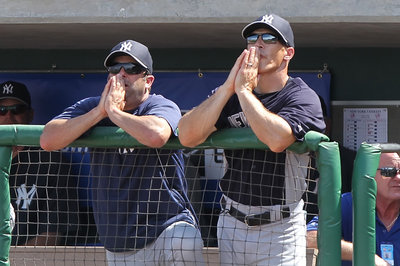 The Pinstriped Bible staff gives their (likely incorrect) predictions for the 2013 Yankees and invites you to attempt the same.

I might be critical of Joe Girardi’s general management decisions from time to time, but in this case I got my Joes mixed up. Ever since the 2006 season, where every Yankee fan got to witness the definition of pitcher abuse by a manager on an almost daily basis, I think of how Joe owes Scott Proctor some of that book money he’s been making considering what he did for poor Proctor’s career after that season: 83 appearances, 102 1/3 innings pitched. That, however, was Joe Torre. Damn, why did the Yankees have to pick another manager named Joe?! My brain can only hold so much information without getting it scrabbled. So I got my Joe’s mixed up, but that’s why my brain just says JJoooe when I think Yankee bullpen.

I went to take a look at how relief pitcher usage manifested itself with the Yankees pen last year. I’ve already scribbled a bit about changing trends in closer characteristics in the league. So I was intrigued to see something which is so self-evidently obvious that it makes you question if you ever use your brain at all. My favorite philosopher of all time is probably Ludwig Wittgenstein. Most of his work has actually been released from notes either written by him, or taken by students at his lectures. To paraphrase one of my favorites of his notes, the greatest philosophy book to ever be written would contain nothing but questions. In other words, if the question is phrased as well as it can be, then the answer will be self-evident. All of the questions will appear rhetorical, and the reader will experience that dawn-breaking-over-marble-slab moment.

So let’s try this: Has bullpen usage in the major leagues been increasing over the years? Has the usage of the bullpen in the major leagues been getting more specialized? Has there been more usage of the bullpen to nullify platoon split advantages recently in the later innings? Yeah, duh. If you didn’t provide a lefty reliever as your answer to who would likely have the most appearances out of the bullpen, then you must like to gamble because the house is usually going to win that one. That was mistake number two.

There is something more interesting here than that I’m just an idiot at times. It looks like 2012 might have seen a marked increase of the trend towards LOOGYs. Last year there were four players tied with the top spot in appearances at 80 games, and three of them were lefties. That’s the first time it tipped that far towards the lefties in recent years. I know, that’s not an all-encompassing piece of evidence, but something else caught my eye that intrigued me.

While I was still under the mist of my wrong Joe symptom, I went to look at bullpen usage of the Yankees in terms of appearances and leverage. As I started to compare the Yankees' pen usage with two managers, who I thought of as having pretty good years managing their pens, Joe Madden, and Buck Showalter, a similarity between the three came out clear as day. All three managers increased the leverage of their primary LOOGY at the end of the season. For Madden that was Jake McGee, Showalter had Brian Matusz at the end of the year in the pen, and Girardi was using Boone Logan as his go-to lefty specialist. When I went back to look at previous seasons, this behavior wasn’t nearly as readily apparent. Both of these two characteristics could be totally coincidental, and at a minimum is not proof of an acceleration in the trend of bullpen usage towards specialization. However, I’m still intrigued when things start to rhyme, and I’m going to pay more attention this year to see if we reach new levels of lefty on lefty love. This could portend bad things for notable lefty meeklings.

Doing these prediction thingies aren’t as useless as you might think after all. You can learn how dumb you are, and in the process it will engrain in your mind exactly what you should have known all along: 1.) if you propose a non-lefty reliever as winning the Most Games Appeared In award, then you’re a sucker made for Vegas, 2.) the love for LOOGYs appears to only be growing stronger as they garner more and more high leverage usage, 3.) I tend to get my Joes mixed up. By the way, no other pitcher has topped 100 innings solely out of the pen since Proctor’s 2006 demise. Seriously, Joe Torre owes him some money. Finally, I have one very serious thing to mention before signing off; my 2013 pick for AL Cy Young: Yu Darvish. Sweet.