"Nobody goes there anymore. It's too crowded." - Yogi Berra

Share All sharing options for: Smaller crowds at Yankee Stadium could have big impact on future plans

The turnstiles at Yankee Stadium have not been spinning as often this season. Through the first nine home games of the year, the average crowd in the Bronx has been 38,432, which compared to the same point last season, represents a drop of nearly 4,000 fans per game. Although still good enough to rank sixth in the majors, the attendance at Yankee Stadium has fallen significantly when compared to the recent past. Not only has the team's average dipped below 40,000 for the first time since 2000, but five crowds have been the smallest to attend a game in the Bronx since 2004, and each has taken turns setting the new Yankee Stadium's all-time low attendance mark.

With only nine games played on the home schedule, there's plenty of time for the Yankees' attendance to rebound. However, it seems clear that the smaller crowds are not the result of temporary factors like weather, but rather the byproduct of a significantly eroded season ticket base. If so, and the declines remain consistent, it will represent the acceleration of a more gradual trend that has seen crowds in the Bronx dwindle from over 90% capacity to less than 80%. 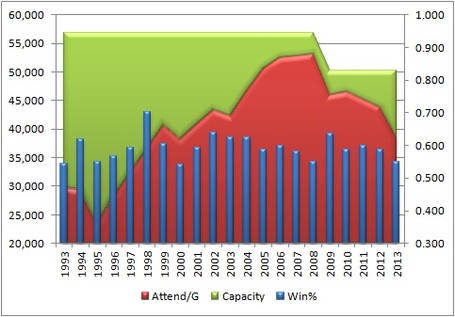 What explains the precipitous drop off in the Yankees' attendance? The most obvious answer seems to be the rising influence of the secondary market. Over the past two years, the team's financial hierarchy has complained about the cannibalization of primary sales caused by the availability of deeply discounted tickets on websites like StubHub. In response to that perceived impact, the Yankees decided to opt out of MLB's deal with StubHub and form their own secondary market called TicketExchange. To this point, it seems as if the new venture has helped stem the extent of discounting, but there are still tickets on various exchanges being offered at prices below face value, so the incentive to purchase tickets from other fans, and not the Yankees, remains.

Because season ticket deposits were due months before TicketExchange was unveiled, plan holders who canceled their accounts were not able to factor the new secondary market into their decision. As a result, the Yankees won't find out whether their new venture will help recapture ticket sales until next offseason. However, if TicketExchange's price floors, combined with a tilted supply/demand balance stemming from the conversion of former season plan holders into secondary market buyers, successfully inflate re-sale prices, then the team could wind up winning some fans back.

The secondary market is only relevant if fans want to see the team in the first place. Over the past two decades, motivation hasn't been a problem for Yankee fans, but is apathy starting to emerge? The team's inability to sell out last year's ALDS seems to corroborate this thesis, but that's really a knee jerk reaction. There were several mitigating factors, including early start times and last minute scheduling, which contributed to the less than capacity crowds in that series, so it isn't fair to equate the empty seats with indifference.

Although it's easy to explain away the lack of sellouts in October, the smaller crowds this April could be a more systemic issue. For the second straight winter, the Yankees' brain trust threw cold water on the hot stove by eschewing free agents, including their own, and promulgating the idea of cost cutting. With pessimism at a relative high among the team's fan base, the expectation of a second division finish in the standings, and not the impact of the secondary market, could be the main driver of declining attendance. After all, as former Yankees' manager Buck Showalter once observed: "Fans don't come to see the Yankees play; they come to see the Yankees win".

Showalter's observation is only partly right. Fans not only come to watch the Yankees win, but they also expect to see superstars. Maybe that's why crowds at Yankee Stadium stagnated until the team signed Alex Rodriguez? Having "Murderers' Row and Robbie Cano" is good for the box office, but now that Francisco Cervelli is batting fifth and you can't make out the team's lineup without a scorecard, "at any moment, a great moment" probably no longer applies.

Hal Steinbrenner has already aggressively tackled the secondary market, so the size of future Yankee crowds could depend on how committed he remains to fielding a compelling team. While the Yankees' principal owner is busy crunching the savings the team can expect to enjoy from dipping below the luxury tax threshold, he might also want to calculate the impact of declining attendance. Even though baseball's revenue model is increasingly being built around television rights fees, gate receipts and ancillary income are still vital contributors to a team's bottom line.

Note: Base case is based on the 2012 Fan Cost Index estimates for Yankee Stadium. The bear case is half the FCI, and the bull case is double the FCI.
Source: fancostexperience.com

It will be interesting to see how Yankee fans react to this year's team. Will the crowds grow larger as the weather heats up or star players like Arod, Derek Jeter and Mark Teixeira return to the lineup? If the team defies lower expectations, will more fans make their way to the Bronx? Or, has off season apathy and secondary market poaching taken an irreversible toll on fans interest in attending games? The answers to these questions could have a significant impact on the team's plans for the future, unless, of course, the Yankees' money men have already decided that smaller crowds are one of the costs of doing business.