It would have been nice to escape Tampa with two wins in three games. Given Andy Pettitte on the mound and how well the Yankees have hit righties so far this year (147 wRC+ in, granted, a small sample size), this game was supposed to be the likely victory. After last night's surprising win over David Price and Fernando Rodney, the Yankees even had a chance to take the series. Alex Cobb had different plans.

Pettitte pitched admirably tonight, reaching double-digit strikeouts for the 15th time in his career and limiting the Rays to three runs in six innings. It wasn't perfect, but that's normally enough to earn a win. Eduardo Nunez made a pair of fantastic plays behind him and the Shawn Kelley, too (Kelley's efforts keeping the game within striking distance were also commendable--two scoreless innings). It's great to see Nunez more comfortable at the position and showing off the range that has always been his calling card.

GIF of the Game: Lessons in defense

The first two runs to score came after some weird plays in the fifth inning, too. Former Yankees catcher Jose Molina led off the inning by taking a hit-by-pitch off the foot. He hobbled around, and he was granted first base. At first glance, it seemed like he was hit, and the Yankees didn't contest it (not that anything would have happened anyway). 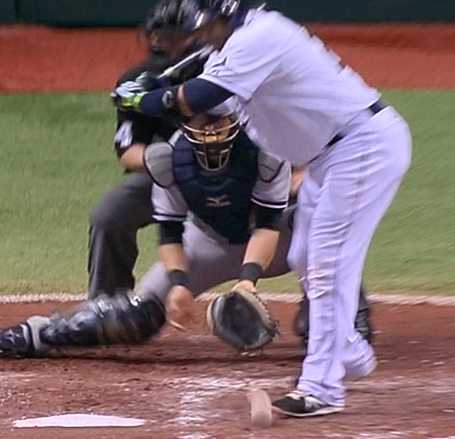 Whoops. I thought Derek Jeter and the big bad Yankees were the only team that faked HBPs! Oh well. Pettitte gave up a single to the next hitter, Kelly Johnson, but it turned into a second-and-third, no out jam when Brennan Boesch fielded the hit about about as well as Bill Buckner. It skipped through his legs, and the Rays would have had the lead if anyone other than Molina had been the lead runner. For a moment, it seemed like Pettitte might get out of it, as he struck out Desmond Jennings and Ryan Roberts in back-to-back at bats. Ben Zobrist is an All-Star caliber player for a reason though, and he lined a double into right-center field to put the Rays on top 2-0. Sean Rodriguez added a solo homer in the next inning off Pettitte to make it a three-run game

The fifth inning was annoying, but you can't win if you can't score. The Yankees did absolutely nothing against Alex Cobb all night. Only one player reached scoring position against Cobb, and that was with two outs in the second inning. He issued just one free pass, and the Yankees notched a grand total of three hits against him in 8.1 innings. Each of these hits came in separate innings, so Cobb was never even challenged. By GameScore, it was the third-best start of his three-year career (81).

Manager Joe Maddon pulled Cobb with one out in the ninth after Brett Gardner grounded a base hit through the right side. In came Fernando Rodney, who also gave hit a single through the right side, to the same man who beat him last night, Ichiro Suzuki. The tying run was at the plate, but Robinson Cano hit a slow roller to second base for an easy out, and Travis Hafner popped up to end it.

Frustrating game, but what can you do? This lineup's been better than expected against righties; they were due for a clunker. Tip your cap to Cobb, shake it off, board the plane back to New York, and take care of business tomorrow against the Blue Jays.