Have Yankees had their fill of Hughes’ inconsistency?

Share All sharing options for: Have Yankees had their fill of Hughes’ inconsistency?

After stumbling out of the gate with two disastrous outings, including one of the worst of his career, Phil Hughes has since rebounded with two strong performances. What's more, according to one report, the 27-year old right hander didn't just pitch well, he did so with a new, more aggressive approach. Is Hughes finally on the verge of a breakout? Or, does his inconsistent start presage another season of mediocrity? For six years, Yankee fans have been asking those questions, each time hoping that the answer would be be different.

Every time Hughes has a string of strong starts, there is a rush to read between the lines. This time around, his strong performances were attributed to having an "edge". Last August, a run of success was said to be predicated upon his "gaining the confidence to shrug off a bad start and move forward". In 2011, Hughes' brief recovery from early struggles was chalked up to improved arm strength and the comfort of having a guaranteed spot in the rotation. Despite the empty promises of the past, the media, fans, and organization have always been eager to explain why a current hot streak from Hughes is different from the others.

Hughes' periods of inconsistency have been more common than his spurts of excellence. Since becoming a full-time starter in 2010, Hughes has had three straight outings with a game score above 60 on only three separate occasions. If you put aside his first six starts in 2010, the right hander hasn't even topped 50, a baseline reading for measuring the quality of a start, in more than three consecutive outings. By any measure, Hughes' inconsistency is undeniable. 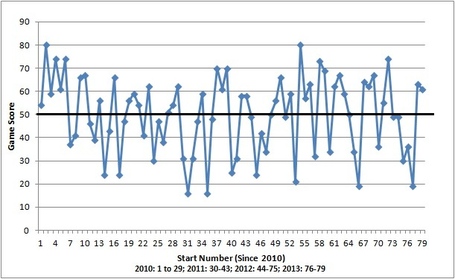 Just because Hughes has failed to live up to his potential doesn't make him a lost cause, right? After all, some pitchers "find it" later than others. Maybe Hughes' new aggressive "edge" will finally help him harness the unmistakable talent that made him one of the top prospects in the game? There's nothing wrong with optimism, but in order to fulfill his potential, the right hander will have to defy historical precedent.

Since 1901, 219 pitchers, including Hughes, have posted a below average ERA+ in over 600 innings before their age-27 season. From that group, only 29 have ended up with a career ERA+ of at least 100, and none have exceeded a modest 112. Although there are some very valuable pitchers on the list, including Hall of Famer Herb Pennock and Cy Young winner Frank Viola, pitchers who establish a track record of mediocrity tend to remain on that course for the rest of their careers. 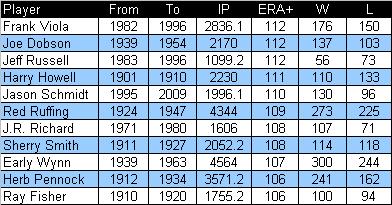 Note: Compares career ERA+ of pitchers who posted a below average reading in at least 600 innings before their age-27 season.
Source: Baseball-reference.com

In four starts this season, Hughes has taken his customary two steps back and two steps forward. After six years, that's no longer progress. Maybe this time he really has found an "edge", but whenever Hughes has turned the corner in the past, the road has always headed in the opposite direction. It's OK to hold out hope, but for the sake of sanity, it's time to stop evaluating Hughes based on his status as a former top prospect and accept the mediocrity and inconsistency that have defined his major league career.