Can Yankees’ tale of two lineups lead to a storybook finish?

Pinstriped Bible turns to the classics for insights about the 2013 Yankees' offense.

Share All sharing options for: Can Yankees’ tale of two lineups lead to a storybook finish?

After three weeks, the Yankees' lineup has defied even the most optimistic expectations. With four of the team's best hitters currently on the disabled list, the Bronx Bombers' ability to score was supposed to take a nose dive. Instead, they have maintained their typical lofty position atop most of the offensive leader boards, including an impressive wOBA of .349 that easily leads the American League. However, all is not well with the Yankees' offense.

It's difficult to tie a ribbon around the Yankees first 17 games, so I figured I'd look to the classics for inspiration. At first glance, it's tempting to say something like the reported demise of the team's lineup has been greatly exaggerated. The overall numbers certainly agree with that assessment, but it's really an oversimplification.

Mark Twain may have known about Connecticut Yankees, but his wisdom doesn't apply to ones from the Bronx. Instead, we have to turn to Charles Dickens because 2013 has been a tale of two lineups for the pinstripes. When facing a right hander, the team's hitters have enjoyed the best of times, compiling a major league leading wOBA of .391. No other team is even close. With a lefty on the mound, however, the Yankees' hitters have posted a wOBA of only .263, which ranks at the bottom. The worst of times in deed. 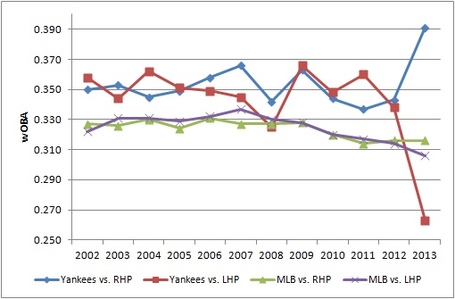 Over the past decade, the Yankees have usually had a very balanced offense. Thanks to a combination of switch hitters and batters capable of handling pitchers from both sides, it's been hard for opposing managers to neutralize the Bronx Bombers' lineup. This year, however, Joe Girardi no longer has the luxury of such diversification. In fact, the team hasn't had an at bat from a switch hitter all season. As a result, the Yankees' manager has been forced to rely on a platoon system, which has yielded lineups that must have more than few fans rubbing their eyes. Ben Francisco batting fifth? Francisco Cervelli in the six hole? In the past, such a batting order would cause a double take, even on a house money getaway day at the end of a long road trip, but in 2013, that has been the norm against left handers. 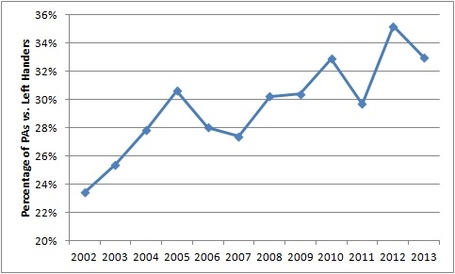 The Yankees probably won't continue to perform so poorly against left handers. If they did, it would be historic. However, it's hard to take too much comfort in a reversion to the mean. After all, the hitters in the lineup are not your typical Bronx Bombers. Although it's reasonable to assume the Yankees will get better against southpaws, is there really that much room for improvement? Sure, the return of Mark Teixeira will provide a boost, but with Derek Jeter and Alex Rodriguez out for the next three months, and Curtis Granderson taking a step back against lefties in 2012, the first baseman alone can't help the Yankees overcome their aversion to southpaws. 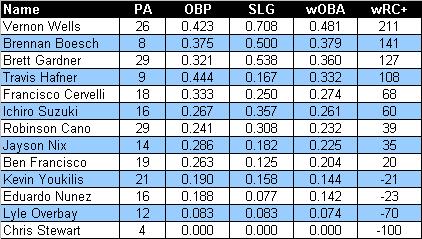 If the Yankees are to improve against left handers, it'll take a team effort. Aside from Vernon Wells and Brett Gardner, most of the lineup has struggled against lefties, so better performance is needed across the board. And yet, there have been two main culprits: Kevin Youkilis and Robinson Cano.

Perhaps the biggest disappointment against southpaws has been Kevin Youkilis. Despite feasting on righties, the third baseman has only managed a paltry wOBA of .142 against lefties, the 12th lowest rate among all qualified hitters in the major leagues. Discouraging, yes, but considering his track record as a lefty masher, the Yankees shouldn't fret too much over a sample size of 21 plate appearances. However, there may be cause for concern regarding Cano. After handling southpaws with relative ease in the early part of his career, the Yankees' All Star second baseman has gradually evolved into a split-conscious hitter. Is this transition permanent, or can Cano revert to a more balanced approach? Unless he can re-discover his stroke against left handers, the rest of the team will be hard pressed to pick up the slack.

Can the Yankees' hitters step up their game against lefties? With a southpaw scheduled to face them in four of the next six games, this week should provide a clue. It's still too early to write the story of the 2013 Yankees' offense, but if the lineup continues its Doctor Jekyll and Mister Hyde impersonation, the Bronx Bombers stand little chance of being lords of the rings after their hunt for another successful October.