Break glass in case of emergency: Yankee starters beyond the regulars

It is a rare season for a team to only use five starters all year. Who do the Yankees have in reserve just in case something goes wrong?

Share All sharing options for: Break glass in case of emergency: Yankee starters beyond the regulars

Breaking news: starting pitchers are fickle. One could make a case that although the Yankees' starting rotation appears fine with CC Sabathia, Hiroki Kuroda, and Andy Pettitte leading the way, there are question marks all over.

Do CC's injuries from last year signal the beginning of a decline? Can Kuroda match last year's performance in the AL East at age 38? Can a soon-to-be-41-year-old Pettitte sustain so many innings? What if 2012 Ivan Nova is the real Ivan Nova? Was Phil Hughes's decent 2012 about the most we can ever expect of him pitching at homer-happy Yankee Stadium? David Phelps showed that he can be a terrific reliever last year, but is he actually good enough to last in the starting rotation and face hitters more than once or twice per game?

One can think of a valid question for all of these starters, as one can for almost every pitcher in the big leagues. That's just the nature of pitching--one small injury can cause a tick in the pitching motion that dramatically impacts performance on the mound. This starting rotation is not going to make it through the season using the same five starters, or even six if Phelps is included. This fact is not an embarrassment--the '09 champions started nine different pitchers that year, and both the 1996 and 2000 champs actually started 12.

The Yanks will have to dip into the reserves at some point for spot starts or rotation fill-ins due to possible injury or ineffectiveness. Last year, Freddy Garcia was booted from the rotation at the end of April, but he still made 17 starts because someone had to step in for Pettitte when Casey Kotchman broke the lefty's leg. We might not have ever learned who Nova was had Javier Vazquez not bombed so terribly in 2010. It's going to happen.

So who are the first in-house options available to the Yankees in case of such problems?

Warren made a spot start for the Yankees last year, and it was ugly. He got bombed by the Chicago White Sox in his MLB debut for six runs, eight hits, and two walks in just 2.1 innings. We never heard from him again at the big-league level all year long, even when he was recalled in September. Warren made the team out of Spring Training this year mostly because Hughes had to go on the Disabled List at the start of the season. The Yankees liked him more than Cody Eppley though, so they sent the ROOGY down upon Hughes's return rather than Warren, even though Phelps was moving to the 'pen anyway. His stellar long relief of the injured Kuroda in the second game of the season against the Red Sox (one run in 5.1 innings) likely helped the Yankees make this decision.

As of now, Warren seems to occupy the early-2012 Phelps/2011 Hector Noesi role in the bullpen. It's somewhat nebulous, as it's just mop-up work, and the Yankees will normally be more inclined to call on the more-proven Phelps for longer relief in close games than Warren. In 53 starts at Triple-A Scranton, Warren has pitched to a 3.66 ERA with 2.9 walks and 6.4 strikeouts per nine innings. His numbers did not change at age 24 in his second season at Triple-A last year, so it's unclear whether or not he will develop to be much more than an innings-eater. Nonetheless, he's not a complete disaster and could probably hold his own for five or six MLB innings if called upon for a spot start again. Ranked by MLB.com as the Yanks' #11 prospect, his Triple-A numbers were not as good as Phelps's, but he could likely give at least a '11 Noesi-like performance (96 ERA+ in 56.1 innings).

Consider Warren's relief appearance against Boston the other day an example of a solid start he could give the Yanks on short notice. The disaster against Chicago last year can counter that, but every pitcher has a bad day every now and then.

The next best 40-man roster option

The 23-year-old righthander is to Warren right now what Warren was to Phelps in 2011. Like Warren in '11, Marshall had never pitched above Double-A before this year, but some think he has a decent chance to be make an appearance for the Yankees this year. Marc Hulet at FanGraphs actually ranked him the Yanks' #7 prospect because he likes Marshall's four-pitch repertoire, which includes a quickly developing curve. 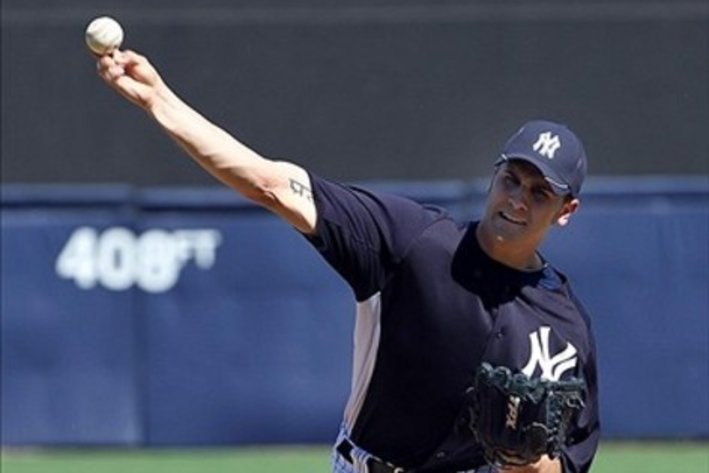 Brett Marshall may have the best argument for being considered next in line for top pitching prospects hoping to make the rotation in the Bronx.

Tommy John surgery in '09 delayed his progress in A-ball for a couple years, but last year, he impressed the organization with his first year in Trenton. Marshall made 27 starts, pitched 158.1 innings to a 3.52 ERA, and held opposing hitters to a .251 average. Only 13.7% of Eastern League plate appearance against him ended in a line drive.

It was not an overwhelming season, but it was enough to be added to the 40-man roster and earn a promotion to Triple-A for 2013. His shaky first two starts in Scranton indicate that ideally, he will need some more time there before a possible call-up for a spot start or long relief. Since we didn't end up seeing Warren in the pros until last June, the rotation would have to take a few hits before we possibly saw Marshall, but he's an option.

It's been a good five years since Wang was last an effective major-league starter. That was back when he was the consensus ace of the Yankees' rotation from '06 until his injury problems from June '08 onward. Fans of those mid-2000s teams will recall a very reliable sinkerballing starter who rarely gave up homers and could always get a double play when he needed one. Wang was called up in '05 when injury-prone free agent starter Jaret Wright got hurt early on (shockingly!), and he stuck with the team for the rest of the year. From 2006-08, the Taiwanese idol pitched 512.1 innings to a 3.74 ERA and 120 ERA+, even earning some Cy Young votes in the process.

It's been all downhill for Wang since then though, as a Lisfranc injury sustained in June of '08 while running the bases in Houston was just the beginning. After a poor start to '09, he went down with right shoulder surgery, and his rehab took so long that he did not make it back to a MLB mound for two full seasons. When he did, he was on the Washington Nationals, but in his few seasons there, he was often injured and rarely appeared to resemble the same pitcher he once was. Wang was unsigned through Spring Training, but after an impressive World Baseball Classic performance with the Taiwanese national team (12 scoreless innings against Australia and Japan), the Yankees gave him a shot on a minor-league deal.

It's hard to tell whether or not Wang will actually make any difference or pitch nearly as well as he did in the WBC. He makes his debut for Triple-A Scranton on Friday night. Wang will probably have to really impress the Yankees to necessitate a 40-man roster move and earn a call-up. It will at least be fun to root for a comeback from a man who was once an important cog of the Yankees' starting rotation.

The star of Spring Training, the 25-year-old lefty pitched 13.2 innings of 0.66 ERA ball with 13 strikeouts and a .180 batting average against. Since making his first Triple-A appearance, Nuno has started three games, pitching 17.2 innings with a 1.53 ERA, a 2.58 FIP, and a 0.623 WHIP. It's crazy to think that a year ago, Nuno was just another older guy hanging around A-ball, and that two years ago, the Cleveland Indians cut him, forcing him to pitch with the Independent Frontier League's Washington WildThings until the Yankees signed him. Is Nuno for real?

Joe Girardi and the coaching staff seemed to like Nuno in Spring Training, and the fact that he throws lefthanded stands to only help him. MLB.com's Bryan Hoch reported that Nuno's advancements were assisted by an improvement in repertoire--he now throws a fastball, curveball, slider, changeup and cutter. The 40-man roster crunch likely kept him off the big-league squad, but if he can somehow keep up the pace in Scranton, it's going to be awfully difficult for the Yankees to justify keeping him in the minors. If he could even just add some lefty relief to the bullpen, it would be welcome.

No one knows what to make of Pineda right now. He's still recovering from major shoulder labrum surgery that could very well permanently ruin his young career. Due to the severity of the injury, they are baby steps. Yesterday, he threw his third batting practice session, and it looked better than his previous two sessions. Hoch thinks that late May or early June is still in play for his return, but the Yankees will give Pineda as much time as he needs. They do not want him to rush back.

Pineda is understandably a complete question mark. No one knows if he will return to the pitcher who impressed the American League so much in 2011. Yet take a good look at that pitcher in this clip below.

The kid could pitch. Substituting that guy into the rotation in place of Nova or Hughes would be a tremendous addition for both this year and beyond since he's under team control through. We simply don't know if Pineda can be that guy again though 2016. We just have to play the waiting game with Pineda until he's even making minor league starts.

Jason: DUIs should be a bigger issue for MLB than steroids

Who benefits from baseball's unbalanced schedule?

Greg: Boston is a sports town