Boston is a sports town. Its people are passionate.

My heart goes out to the people in Boston. Tonight the Yankees begin a three game series against the Diamondbacks. With what happened in Boston yesterday, I'm reminded of another time the Yankees faced them.

Share All sharing options for: Boston is a sports town. Its people are passionate.

I hope this doesn't come across as self serving or anything like that. Sometimes I have a hard time writing things like this because I have to control my cynicism. I just wanted to get this off my mind. Yesterday, Boston was the latest victim in a horrific, brutal attack against innocent people. There are no words for the images and video that poured out from Beantown. Word has yet to come out about who is responsible for all of this. Right now, that's not on my mind.

My thoughts go out to the families, the victims, the Boston citizens. My thoughts also are about tonight's Yankees game with the Diamondbacks, the first in our year-long interleague 2013 games against a NL team. You know my feelings towards year-long interleague. Due to what happened yesterday, this particular series just reminded me of another dark time in our country.

In the postseason of 2001, the Yankees faced the Diamondbacks in a gripping seven game World Series. The Yankees lost and I was not that upset. I just remember it being one of the most exciting World Series I had watched since 1996. Win or lose, it was gripping and it was exactly what a lot of people needed in New York City during that time. Sure a World Series victory would have been incredible, but that's the way the game goes. It's just sports. Or is it?

I've talked with people who wanted a World Series victory for the Yankees that year more than any other. Those people were not just Yankee fans. They were Cubs fans, Diamondbacks fans, Mets fans, Giants fans, Rays fans, Orioles fans, and yes even Red Sox fans. To this day I don't think I've seen more interlocking NY clothing on people while walking around the city. I don't even know if they were Yankee fans. Or sports fans, for that matter. I just know that people were united, not with the Yankees or anything like that, but with each other.

Boston, you're our home 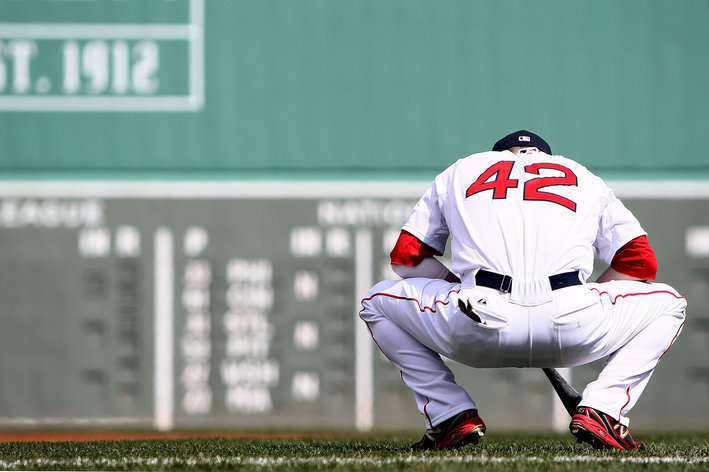 From "Over the Monster": A gorgeous day in Boston turned to horror, but maybe we can take solace in sports for a while.

So here we are today, a day after another unspeakable tragedy has occurred. This time it's in the city where our rivals play the game of baseball we all love so much. If you know me, you know I always have some snide remark to say about the city of Boston and especially Red Sox fans. I'll pretty much root against any Boston sports team, whether it be the Patriots, Celtics, Bruins and hell even the Cannons, their Major League Lacrosse team. Few things give me greater joy then seeing Boston fans depressed and miserable.

The truth is that I have nothing but respect and admiration for Boston sports fans. Boston is a sports town, like New York City. They are as passionate about their teams as we are for ours. It's not the ESPN or FOX Sports diatribe or the imbalanced scheduling that makes us play them 19 times a year that fuels the Yankees-Red Sox rivalry. It's the passion of the people, the die-hard fans who wear their team's colors proudly and wishes to see their team stand atop the other in glorious victory. MLB exploits the Yankees-Red Sox rivalry because it's one of the more storied rivalries in all of sports. No amount of games played during the year or pretty graphics make the rivalry any better. The players make it what it is. We make it the way it is, both Yankees fans and Red Sox fans.

Yesterday the Bruins game was cancelled due to what happened. They will soon have a chance to clinch a playoff berth. The Celtics will play the Knicks in the NBA playoffs. The Red Sox are performing much better than expected. Even the Boston Cannons have clinched a playoff berth. While I don't think I can ever root for the Red Sox to win, or any Boston team, I won't be that upset if they do well this year. I just hope that all their teams will help the people come together in these troubling times, like the Yankees helped my city come together after what happened in 2001.

I don't really have to hope, cause I know it will. I've been to Boston. I've seen its beauty. I've talked with its people. I've even gotten a "YANKEES SUCK" stamp on my hand at a bar outside of Fenway, which I laughed at. They will come together and be strong together. Boston is a sports town. Its people are passionate.