Why does Ben Francisco exist?

Share All sharing options for: Why does Ben Francisco exist?

What is the point of Ben Francisco? He was obviously never meant to amount to anything, but still, there is no reason for him to be on this team. He has only appeared in four games this year and has yet to get a hit in six plate appearances. I'm not judging him on his inability to produce under such small amount of sample size, but his physical presence just takes value away from this team as a whole.

Do the Yankees really have to re-sign Phil Hughes? 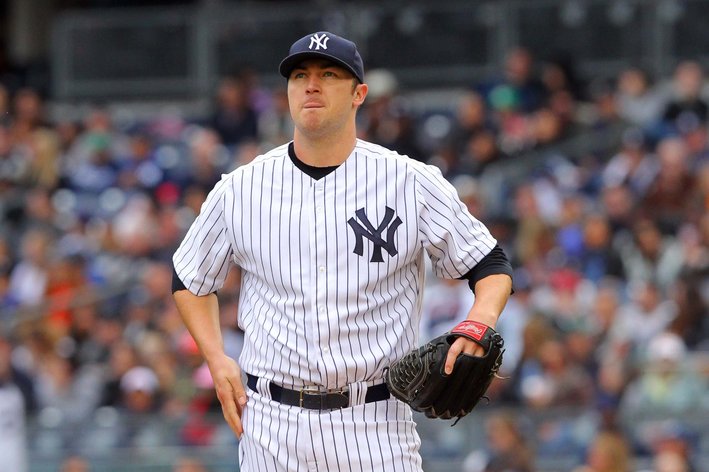 There has to be someone better than him, right?

Going off the way he has been used so far, Francisco is the Yankees' answer to left handed pitching. Or something like that. He started against Jon Lester and was pinch hit for after he left the game, he came off the bench to face lefty Andrew Miller and he started against Wei-Yin Chen. He has yet to get a hit off of anyone, so either he's not that good against left handers or he's just not a good pinch hitter.

The answer is he's not good at anything. For his career against lefties he has a 101 wRC+, which is average, but he also has a 101 wRC+ against right handers too, so does he really hit southpaws well, or is he just not that great against anyone? As a pinch hitter he has a career OPS of .690 with a 26.8% strikeout rate and a 91 WRC+ in 119 at bats. That's not much of a sample size, but as a pinch hitter you don't really get that luxury.

He's really just supposed to be the fourth outfielder, which is fine, but he's not any good in the field. For his career, spanning back to 2007, he has a -16 UZR in the outfield with -12.8 runs saved from his range. If your fourth outfielder can't hit well he should probably be a really good fielder to bring in as a defensive replacement. He might be better than Vernon Wells, who has a worse career UZR (-33), but he also has managed a 4.3 UZR over the last three seasons.

On top of that, Francisco has been installed in the DH spot for his two starts for no other reason than Brian Cashman forgot to find someone who could hit lefties off the bench. Brennan Boesch actually got the start in right field last night and he has a -23.6 UZR as he enters his fourth season. If Ben Francisco can't play right field over Boesch than there can't be any purpose to his presence on this team. He bat right handed, but it doesn't seem to make much of a difference.

The biggest problem having him on the roster is that he's on the roster and someone else isn't. Boesch could also just as easily be dumped, but at least he's gotten a few hits in limited action. No one would miss Francisco, or really notice he was gone. Instead of carrying someone that is always going to be on the bench until Curtis Granderson returns and kicks him off anyway, the team could carry someone they might actually have some use for. Corban Joseph or David Adams could be brought in to provide some infield depth. Dan Johnson could be the new DH against lefties, since he has a 103 wRC+ against them.

If Eduardo Nunez is going to be out for an extended period of time, the Yankees' shortstop is Jayson Nix and that's it. If they want another option for shortstop they could turn to minor league journeyman Gil Velazquez or semi-non-prospect Addison Maruszak, who can play all over the field. Neither will hit, but will at least add a body to the depth chart. Vernon Wells, Brett Gardner, and Ichiro Suzuki are going to play every day until Granderson returns and if they already have Boesch to back them up, Francisco is just wasting space.

I understand that Brian Cashman has always liked him, but why? He doesn't do anything particularly well and he takes a spot away from someone who could actually be of some use to the team. Depth is valuable, but sometimes you have to trade depth in one place to replenish depth somewhere else.