Share All sharing options for: Yankees 5, Orioles 2: CC Sabathia and the triple plays

This game was completely dominated by CC Sabathia. The Yankee ace that everyone has been longing for showed up today to dominate the Baltimore Orioles and lead his team to victory. Besides CC, the game had another Eduardo Nunez injury scare, a dropped third out, and a triple play.

The Orioles scored a run in the second inning when Alexi Casilla doubled to start the inning and Manny Machado singled him in. The Yankees tied the score in the bottom of the inning when Brett Gardner walked, Robinson Cano singled and Kevin Youkilis singled. Youk got caught in between first and second and tried to get into a rundown to get Cano to score, but it didn't work out. 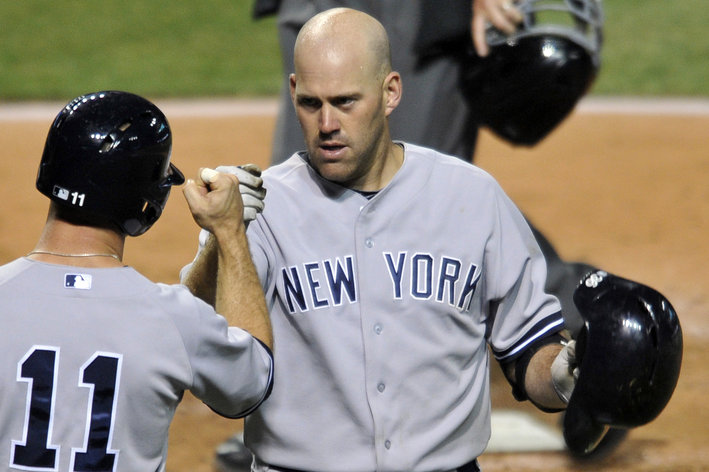 Cliff Corcoran wonders if they are a pathetic hodgepodge of castoffs or are they a wily gang of veterans and underappreciated home-grown regulars?

The score stayed tied at 1-1 until the fifth inning when Francisco Cervelli walked, Gardner bunted him over and Cano singled him in to take a 2-1 lead. It looked like the Yankees had this game under control, but then the top of the seventh brought a little chaos into the game. Youkilis committed an error when he misplayed a ground ball at third base, Sabathia was then called for a balk, which may or may not have actually happened, and the runner was in scoring positon. J.J. Hardy then hit a slow ground ball up the middle to score the tying run.

However, the Yankees came right back, thanks to the assistance of Adam Jones. The bottom of the seventh started off with a Cervelli walk and a Gardner sacrifice bunt, much like the fifth inning. Cano then grounded out to move Gardner over, Youkilis was intentionally walked and Travis Hafner was hit by a pitch to load the bases. Vernon Wells hit a long fly ball to centerfield that Jones easily tracked down, however, the ball bounced out of his glove and the bases cleared to make it 5-2 Yankees.

GIFs of the Game: Bobbles and triple plays!

In the bottom of the eighth it looked like the Orioles were about to get to CC. He had thrown only 70 pitches in the first six innings, but by now he had started to labor. Casilla singled and Nick Markakis singled to put two on with no outs and Manny Machado came up to bat with Adam Jones waiting on deck. The game was on the line and Joe Girardi stuck with Sabathia. Then the triple play happened. Machado hit a ball to Cano, who threw it to Jayson Nix, who stepped on second to get the runner coming to second for the first out. He threw it to Kevin Youkilis, who got the lead runner in a rundown and eventually tagged him for the second out. Machado tried to make it to second during the rundown, but Youkilis threw to Lyle Overbay, who threw it to Cano for the tag out. Three outs and they were out of the inning. 4-6-5-6-5-3-4. Clutch fielding?

CC Sabathia finished with nine strike outs, while giving up one earned run on eight hits and zero walks in 8.0 innings pitched. At one point he struck out five batters in a row, and while he did labor a bit late in the game, he showed everyone there's nothing to worry about from him. Even with diminished velocity he can be a threat on the mound. He was so good that he only allowed Mariano Rivera to get in the game for the save.

The Yankees had another injury scare, and the second involving Eduardo Nunez. He was hit by a pitch on the wrist and almost left the game. When he took the field in the bottom half of the inning he couldn't throw the ball and he left the game. X-rays came back negative and he looks to be day-to-day with a contusion, once again.

Offensively, the Yankees got the job done, sort of. They scored five runs, but only two of them were earned.Youkilis had three hits, Cano had two of his own, and Overbay had one. That was it. Thankfully, the Orioles pitching staff was wild as Gardner and Cervelli drew two walks each and Hafner had another. The hot hitting Youkilis received the Yankees' first intentional walk of the season. Ichiro Suzuki did nothing again tonight and ended up with two strikeouts.

The Yankees finally got a game in and now their winning streak stands at four in a row. Phil Hughes takes the mound tomorrow and hopes to not be the one to stop the good times from rolling on. Andy Pettitte's next start moved back due to back spasms

The Yankees are the best against the fastball