Robinson and Rickey star in "42," but MLB needs to honor era’s forgotten heroes

Share All sharing options for: Robinson and Rickey star in "42," but MLB needs to honor era’s forgotten heroes

After much anticipation, tomorrow marks the broad release of "42," Warner Brothers' biopic about baseball legend Jackie Robinson. However, based on the trailers, it seems as if the movie pays equal tribute to Branch Rickey, the Brooklyn Dodgers' GM who selected Robinson to break the sport's color barrier.

In advance of opening night, there has been debate about the extent to which Rickey should be cast as a hero. Was Rickey a courageous pioneer whose quest for social justice was the driving force behind the integration of baseball? Or, was he an opportunist who, after years of abiding the gentleman's agreement that banned black players, preyed upon the Negro Leagues as a source of cheap talent? Both depictions seem like an extreme view, with the truth lying somewhere in the middle.

It would be a shame if "42" becomes a referendum on Branch Rickey's motivations. Regardless of what brought him to that point, Rickey's union with Robinson helped reverse baseball's legacy of racism, and both men should be lauded for their participation. It doesn't really matter how credit is allocated between the two pioneers. Rickey and Robinson each acted as a hero, and, as a result, their individual histories really are one. 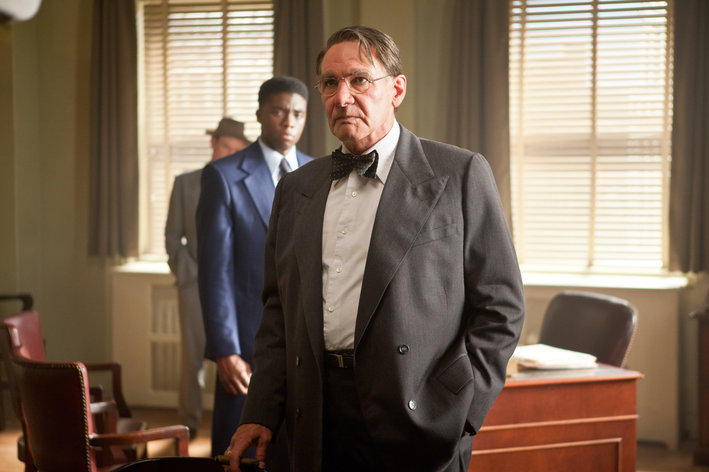 Jackie Robinson deservedly is credited as a pioneering hero, but the man who put him in the position to do so risked a great deal as well.

Paying sufficient tribute to two heroes is a difficult enough task for one movie, but imagine if there were hundreds of others who also deserved a tribute? Well, that's the reality confronted by "42" (at least it should be). After all, Rickey and Robinson weren't alone in their fight against segregation. They were standing on the shoulders of the hundreds of players and businessmen who built the Negro Leagues into a vibrant enterprise that, although separate, was in many ways equal to their white counterparts. For too long, these heroes have been ignored, and many of their contributions have been forgotten. "42" has the chance to remind us, but will it take advantage?

A skilled documentarian would need more than 128 minutes to tell the story of the Negro Leagues, so it would be unfair to expect "42" to accomplish that task as background. Still, in order to fully capture the significance of what Rickey and Robinson did, the contributions of Negro Leaguers must be noted. After all, without names like Rube Foster, Josh Gibson, Satchel Paige, Cool Papa Bell, Monte Irvin and Oscar Charleston, among many others, we may have never heard of Jackie Robinson, not to mention the players who followed in his path.

So far, the lead up to "42" has helped the Negro Leagues Baseball Museum (NLBM) increase its profile and, importantly, attract financial support. That's a good start, but what about the aftermath? Hopefully, the movie will continue to drive more interest in this forgotten part of baseball history. However, baseball shouldn't wait for Hollywood to tell these incredible stories.

Jackie Robinson has a day dedicated in his honor, so why not the Negro Leagues as a whole? On a designated date (perhaps May 2 in honor of the first game played in the Negro National League), teams could wear throwback uniforms commemorating a Negro League ball club, each stadium could host a ceremony to honor a Negro Leaguer who played in the same town, and some of the proceeds from ticket sales could be used to promote Negro League history. The possibilities are many. Until now, the opportunities have been few. Although baseball has gradually begun to pay tribute to this golden era, it's time for a more centralized approach. If Bud Selig needs help ironing out the details, I am sure NLBM President Bob Kendrick would be more than happy to help out.