The next great strategy: Bunting?

Could the next paradigm shift in offensive strategy be managers forcing their players to bunt?

Share All sharing options for: The next great strategy: Bunting?

The Tampa Bay Rays and skipper Joe Maddon have become the poster child of expanding the use of radical defensive alignments. Their willingness to move defensive players outside of their normal coverage zones has allowed them to finish in the top five of defensive efficiency metrics in each of the last three years. No other team has finished in the top five all three years.

Maddon and the Rays are probably pretty flattered right now because their success is breeding a lot of copycats. In the first series of the year, the Yankees witnessed some new derivations of extreme defensive shifts against Robinson Cano. The infield played Cano to pull while the outfield played him straight. Boston Red Sox manager John Farrell also had third baseman Will Middlebrooks play out in shallow right field. He left Dustin Pedroia in his normal spot in the infield instead of shifting everyone to a new spot as they do most of the time. The reasoning behind these moves has been filtering out through the media, and the causes appear to be mostly related to work Farrell has done with third base coach Brian Butterfield. I assume that a lot of the data they refer to is being generated by systems not yet released to the general public, like Field / FX. The result is that it appears more teams are accepting the value of the data and using it to design increasingly complicated defensive alignments. This begs for a response in offensive tactics.

Cano might be getting a taste of new defensive strategies, but Mark Teixeira has faced them with increasing frequency for a few years. Hey, I want to talk about bunting, so of course I’m going to bring up Tex! Let’s take a look at the currently injured Yankee first baseman.

The trend is not your friend here, particularly when we look at park and league-adjusted figures such as wRC+. Seeing a player peak in his late twenties is traditionally exactly what we should expect, but that doesn’t necessarily mean we should expect such a steep decline for a player from a less demanding defensive position like first base. The worst trend on this chart to me, however, is the BABIP figure. It has fallen well below where it was at the beginning of his career, and I find it hard to believe that three years in a row is just bad luck. This is how it looks on a chart: 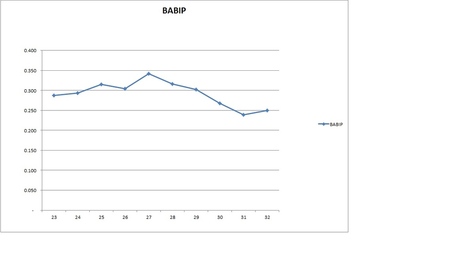 People who support the use of sabermetrics like to say it is all about finding the truth that you can’t see with your eyes. In this case, I think we all know that what we see with our eyes jibes pretty well with what we see in the numbers. Teixeira is getting squeezed by the shift. He used to talk about trying to fight it, but decided that changing his approach would do more harm than good. Joe Girardi backed up his decision by essentially saying he doesn’t want a player to try and do something he's not comfortable with. That’s a fair enough response, but I’d like to know how someone like Tex is ever going to get comfortable doing anything without practicing it? Let’s just imagine for a minute that Billy Martin is alive and coaching the Yankees again right now. In my Billy Martin 2013 world, I can imagine the Yankee skipper forcing every member of his team to take bunting practice in the cage before every game. Sure, maybe we would wind up with Tex in Martin’s face in the dugout instead of Reggie Jackson, but I think the manager’s strategy would work.

I’d like to run a what-if scenario using Teixeira’s recent 2012 season. Let’s assume that in 2012, Tex is forced to practice bunting by Martin enough so that he actually gets comfortable performing the task. Martin tells him to bunt down the third base line if the defense is shifted and there are no baserunners. The primary gain would be that the Yanks get a free baserunner without making an out. In this scenario, I’m going to assume that would happen one out of every five times Tex comes to the plate. How often would Tex succeed? I picked 75% because historically, bunting for sacrifice has a success rate around that level. That’s a strategy mostly used when the defense expects it to be a possibility.

In this case, Tex is a slow runner and is trying to get a hit, but the entire left side of the infield is vacant. I’m assuming that about one out of every four times, Tex would bunt it too close to the pitcher, or fail to succeed before reaching two strikes. (If you want to pick some other rate of success, I won’t quibble. It’s a key assumption, but it’s my scenario so we’re going with it.) Next, I’m going to remove the opportunity set from his actual numbers. Tex hit a home run in 2012 in 4.6% of his plate appearances. Since he’s now going to bunt 105 times, that means he will lose five home runs from his total.

The chart below shows what I think his numbers would look like, assuming a 75% success rate at bunting, and adjusting all of his extra base hits and walks to factor for the change of strategy.

So it looks like Mark Teixeira could be a .366 slugger with a .405 on base percentage and a .947 OPS! Amazingly, that estimated OPS figure is exactly the mark he used to achieve before receiving increased exposure from the shift in the last three seasons.

I know there are huge assumptions in this analysis. Take scoring--what if Tex starts to do this with a runner on first base? I’m going to act like a grumpy old man because I don’t want to get lost kissing the trees for the forest. I’m convinced more than ever that this strategy is the way to attack the shift. In reality, Tex wouldn’t use at bats to bunt because the defense would respond. I don’t believe for a nanosecond the claims that people make for their willingness to let power hitters take free bases. If that were really true, then we would be seeing a lot of Buck Showalter / Barry Bonds moments and four fingers wiggling. I don’t believe the myth that Ted Williams hit into the shift because he didn’t want to mess up his swing. He probably did it just to show them that he could; that sounds like the man from everything I’ve heard about him.

Players like Tex face more complicated shifts more often because managers have better information to use now than ever before. The defensive shifts work, and they hurts these players' production. It’s time someone responded. If a player like Tex started to bunt with regularity, then I’m sure the defense would respond to creating a .950 OPS player. I assume we would see the third baseman come back over to protect against the bunt. Now, holes are expanded in the shift. If that third baseman plays in too close, then we could see the return of the "butcher boy." Those would lead to doubles unless the left fielder is brought in to play behind the normal shortstop position. Things get tricky for the defense very quickly. I also don’t assume all of the good qualities to putting the ball in play and making a pitcher attempt to field it. There would be throwing errors, and Tex would find himself on second a few times replacing some of those lost doubles to the gap.

The real issue is getting the player to do this. That’s why I picked Billy. You’re going to need someone to force the issue. Teixeira says he stopped bunting when he was 11 years old. I know these guys could do it if they were forced to though. Bunting just isn’t that hard. Take a major league player with 20/12 vision and the ability to hit an 85 MPH slider, and you’ve got yourself a guy who can control a bat. If I was a manager, then people would probably hate me for doing this. But I’d make them do it nonetheless. How will Joe Madden respond when other teams finally start to employ specialized shifts against the Rays? Whatever happens in the future, I’m convinced more than ever that the next great offensive strategy is probably a return to the bunt. I just don’t know who’s going to have the guts, or the desperation, to do it.