CC's one of three Yankees currently signed to huge deals that run through 2016, but unlike Tex and A-Rod, it's hard to say he hasn't been earning his money.

Share All sharing options for: Know Your 40: CC Sabathia

CC Sabathia has been such a reliable starter for the past 12 years that last season appeared to be a down year for him. CC's "down years" would probably be most pitchers' career years.

The Cleveland Indians of 1995-2001 were a terrific team that won six American League Central division titles in seven years under the leadership of its roster architect, general manager John Hart. He had an eye for talent, and the Tribe wisely chose Sabathia with its first-round pick in the '98 MLB Draft, the 20th overall. (It's always amusing to see the other random players picked before superstars--in CC's case, there's Ryan Mills, J.M. Gold, and Clint Johnston. All were starting pitchers and none made the majors.) Sabathia was a high school draft pick, but the Indians quickly moved him through the system.

After splitting the 2000 seasont between High-A Kinston and Double-A Akron, Sabathia cracked the Indians' starting rotation in '01, and he went on to have a terrific season as the Tribe won another division title. The big lefty turned 21 that July, struck out 171 batters in 180.1 innings, and finished second behind only "rookie" Ichiro Suzuki in the AL Rookie of the Year voting. The Tribe lost its ALDS matchup with the Seattle Mariners, but Sabathia won his Game 3 start against the 116-win juggernaut to momentarily give Cleveland a 2-1 lead in the series.

Sabathia stayed about league-average for the next four seasons with a pair of All-Star appearances as the Indians rebuilt until he broke through and became one of the AL's finest starting pitchers as a 25-year-old in 2006. He recovered from an April oblique strain to pitch to a 3.22 ERA in 192.2 innings, good for a 71 ERA- and a 5.4 fWAR season. Despite a hefty workload, the April injury was the last time Sabathia would be on the Disabled List for six years. The next season, he pitched the Indians back to the playoffs with an utterly-dominant season in which he won the AL Cy Young Award by throwing a league-high 241 innings, striking out 209, and improving to 6.8 fWAR. His control was amazing, as he only walked 1.38 per nine innings. He was worn out by October though, and he did not pitch well in three playoff starts against the Yankees and Red Sox as Cleveland made it to the ALCS but blew a 3-1 series lead in its last playoff appearance to date.

In '08, the Indians dropped from contention earlier than expected, and with Sabathia about to hit the free-agent market, they dealt him to the Milwaukee Brewers on July 7th. He was not having as great a season as '06 or '07 at the time, but upon entering the National League, he entered God mode. In 17 starts with Milwaukee, he threw seven complete games, three shutouts, struck out 128, pitched to a 1.65 ERA (39 ERA-) and compiled 4.3 fWAR. The Brew Crew was trying to make the playoffs for the first time in 26 seasons, and knowing Sabathia always gave them their best chance to win, they pitched him on three days' rest three times in a row in September. It worked, and they won the Wild Card on the season's last day as Sabathia threw a four-hitter at Miller Park. He was doomed by a Shane Victorino grand slam in his one playoff start against the Phillies, but what a season for the ages it was for Sabathia in total: 256.2 innings, 36 starts, 256 strikeouts, a 2.70 ERA, a 2.91 FIP, and 7.2 fWAR.

Sabathia, the Yankees, and the demise of free agency 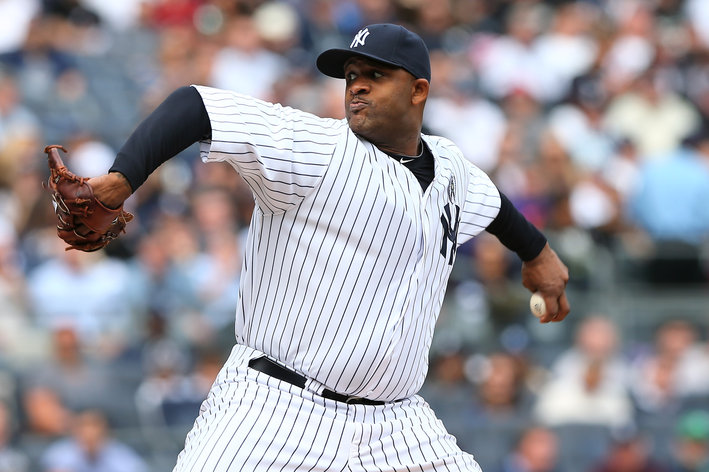 Due to extensions aroung baseball, obtaining an ace in free agency will be impossible over the next few seasons. The Yankees will sink or swim with CC Sabathia. Will he continue his ace form?

The Yankees were not shy in their pursuit of the 28-year-old southpaw. Despite some hesitations about pitching in New York, they gave him $161 million reasons to look past these qualms and sign up for seven seasons. They included an opt-out clause in the deal for him to possibly exercise after his third year, and after the 2011 season, it would have been shocking for Sabathia to not use it. From 2009-11, he stayed healthy and made 101 regular season starts, averaging 208 strikeouts, 235 innings, a 3.18 ERA (138 ERA+), and appeased the purists with 59 total wins. Sabathia finished in the top five of the AL Cy Young voting each year.

He was, of course, a central figure on the '09 World Series championship team as he shook off his previous two seasons of playoff duds to record a 1.98 ERA in five playoffs starts (two on three days' rest) against the Twins, Angels, and Phillies. Sabathia took home ALCS MVP honors thanks to 1.13 ERA in two starts, and after getting outpitched by former teammate Cliff Lee in World Series Game 1, he came back to throw 6.2 innings of three-run ball in the Yanks' Game 4 victory. Sabathia was inconsistent in the 2010 playoffs, pitching well in two starts against the Twins and Rangers, but not in ALCS Game 1. His 2011 playoffs were disjointed by the weird suspended game that ended his Game 1 start after just two innings, and he struggled in a Game 3 loss to the Tigers in Detroit.

That small sample size of playoff missteps notwithstanding, the Yankees recognized that they could not let CC go from their team after the 2011 season. The rotation was full of question marks after him, and he certainly pitched well enough to earn his money, so they re-signed Sabathia to a new five-year, $122 million deal. The contract was basically the same as his previous one except for an extra year worth $25 million in 2016 and an option for another $25 million year in 2017 if he stays healthy:

Last year, Sabathia pitched to similar numbers as in 2009-11, although he missed about six starts with a left groin strain and left elbow inflammation. While some fans have worried that he is beginning a decline due to the very slight step down in performance last year, it was really not that concerning.

It was lucky enough that Sabathia avoided the Disabled List five years in a row, and the injuries were nothing that forced him to miss serious time. The statistics were perfectly fine, as he was sixth among all AL pitchers in WAR, tenth in ERA, seventh in FIP, sixth in K/9, fourth in BB/9, and first in BB/K ratio. His average fastball velocity took a dip from around 94 to around 92.5, and its pitch value per Fangraphs and Pitch FX declined as well. Velocity will generally decline while a pitcher is in his thirties, but that does not mean he is doomed to be mediocre.

In fact, CC's slider and changeup both improved from 2011 to 2012, as did his control. As he ages, CC can certainly became more of a crafty lefty like his teammate, Andy Pettitte, and for awhile, he can still overpower hitters when he needs to, as he did in two starts against the Orioles in the Division Series last year. There's no real comparison for any starter quite like CC in major-league history since no one has really been both as big and as tall as Sabathia. One former player who might come close is David Wells. Although "Boomer" was not as imposing as CC, he was also a large lefty. and he was still tossing stellar seasons into his late-30s. Hell, his fantastic '98 season occurred when he was 35. Sabathia won't turn 35 until the middle of the 2015 season, and he keeps himself in better shape than Wells did. If Wells can stay effective into his late-30s, CC sure can.

There is no need for major concern over CC's aging until he suffers major injury or starts showing weaknesses over an extended period of time (not just a handful of starts). I will have faith in Sabathia as the leader of this pitching staff for several years to come. Quite simply, he's the ace.