Are Yankees’ Dwindling Spring Crowds Headed to the Bronx?

Share All sharing options for: Are Yankees’ Dwindling Spring Crowds Headed to the Bronx?

Attendance has become a hot topic in the Bronx, and, after two weeks of Spring Training, it seems as if the issue has followed the Yankees to Tampa.

As of March 6, the Yankees are averaging 9,356 fans at Steinbrenner Field, or 14% lower than last year's figure. Not since the strike-plagued spring of 1995, when the Yankees played in Fort Lauderdale (click here for a chronological history of the Yankees' spring homes), has the team averaged fewer fans. What's more, the 7,677 fans who filed into the Boss on February 27 represented the smallest spring crowd to watch a Yankees' home game since at least 2002. And, the slightly larger crowd that attended the next game was the second smallest during the same span. There's no disputing that attendance at Steinbrenner Field is down, but the question is why? 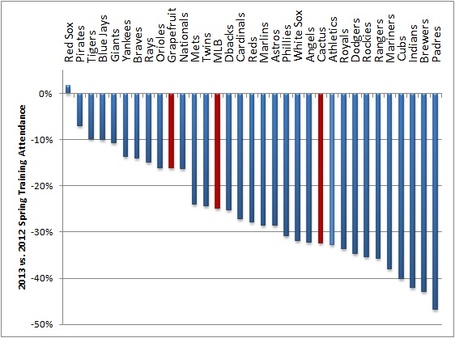 Note: 2013 data is as of the March 6. Attendance includes only games played against major league teams at typical spring training facilities.
Source: Yahoo.com, ESPN.com and sportsbusinessdaily.com

Before answering that question, we need to examine how the Yankees' spring attendance compares to the rest of baseball. Unfortunately for major league baseball, and the chambers of commerce in Florida and Arizona, it turns out that the Bronx Bombers aren't the only team attracting smaller crowds this spring. In fact, only the Boston Red Sox have experienced an increase, albeit at a very modest 2%. Otherwise, the declines range from the Pirates at 7% to the Padres at a whopping 47%.

In aggregate, average attendance for games played through March 6 is down by nearly 25% compared to 2012 totals. However, the Grapefruit league's decline has been less drastic. While attendance in Florida is down 16%,Arizona crowds have contracted by 32%. So, in comparison to league-wide totals, the Yankees' 14% haircut is pretty much on par. As a result, our original question now widens to include the rest of the league.

The most obvious place to start is the economy. However, a report from BMO Financial Group suggests this is a dead end. The bank's annual study states that Florida is in the midst of a "modest recovery" with increasing growth projected over the next two years. BMO also cited the state's dramatic decline in unemployment and increased stabilization in housing markets, including Tampa, which has enjoyed a 10% rebound. BMO's outlook for Arizona is even rosier. In other words, if economics were the reason for declining spring training attendance, it should have been evident earlier in the recession, not during the recovery that is currently underway. 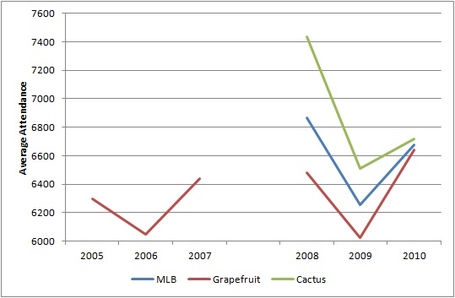 There's one more pink elephant to consider: the WBC. Perhaps the early start to Spring Training necessitated by the tournament as well as potential distractions caused by the event are to blame for declining attendance, especially when you consider exhibition games involving national teams are not included in official attendance figures? Based on a comparison to 2006 and 2009, the other two years when the tournament was played, this seems to be at least part of the answer.

It was difficult to find 2006 spring training attendance data for the Cactus League, so for the purposes of comparing the impact of the first WBC, the 15 remaining Grapefruit League teams were used as a proxy. From 2005 to 2006, this group experienced a small 4% attendance decline, and then, in 2007, recovered the loss and then some.

In 2009, there was an even more significant decline in attendance. With the WBC being played for a second time, spring crowds declined by 9%, including 7% in Florida and 12.5% in Arizona (a similar proportion seen this season). Once again, in 2010, spring crowds quickly recovered, further corroborating the link between the WBC and declining exhibition season attendance.

Although this spring's attendance declines are much more dramatic than in 2006 and 2009, the small sample could be skewing the data. Also, as the WBC gains notoriety, it could be causing a greater disruption. At the end of the exhibition season, we should have a clearer indication of the extent of the impact, but at this point, that one exists in undeniable. 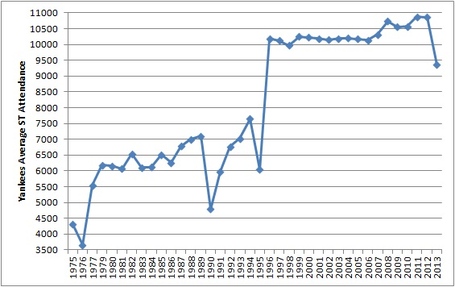 So, the Yankees' attendance decline isn't a team issue after all, right? Well, not so fast. Although the WBC has historically impacted league-wide Spring Training attendance, before this season, the Yankees had been immune. In fact, in 2009, the team set a spring attendance record.

It also doesn't appear as if the earlier start can be cited as a contributor to smaller crowds in Tampa. In the three February spring homes games played this year, the Yankees have averaged only 8,608 fans. Meanwhile, in four other February games played from 2002 to 2012, the mean crowd was 10,655. That's a 20% decline for games played on similar dates.

Finally, the small sample size doesn't provide much of an alibi either. Although the Yankees have only played six games in Tampa to date, attendance is still down over 10% when compared to the same number of games in 2011 and 2012. This might imply a moderation in the overall decline by the end of the spring, but it doesn't suggest a complete recovery.

It's hard to put a finger on why the Yankees' spring training attendance is in decline this year. Based on the league-wide data, it's hard to dismiss the WBC altogether. In a sense, the real mystery isn't the dwindling crowds, but the Yankees' sudden vulnerability to the macro trends that have impacted most other teams.

So, what was different for the Bronx Bombers in 2006 and 2009? Optimism. Entering those seasons, expectations were high for the Yankees, but this year, the outlook is much less sanguine. In other words, the WBC may be at the root of the Yankees' spring training attendance decline, but a more cloudy outlook for the team could be the real underlying reason.

The Yankees are still one of the top Spring Training attractions, so it's easy to dismiss the team's declining attendance as trivial. However, you can bet Hal Steinbrenner is paying close attention. With the team already hinting at lower season ticket sales, the smaller crowds in Tampa just might be a preview of what's coming (or not coming) to the Bronx.