All Spring Training games should go this quickly. I wouldn't mind if all regular season games went by this fast either. I'd prefer that we win these fast games during the regular season, which is only four days away. Our Bronx Bombers did not win today. 2-1 was the final score against the Pirates. Fast. Easy. Nothing much to see here.

Actually there was something to see here and that something was the wonderful pitching of Hiroki Kuroda. HIROK HIROK'd his way over the Pirates for six innings, giving up no earned runs and no walks while striking out five and allowing only one hit. I'll take six innings of that kind of performance any time during the regular season, thank you very much. If you want to give us nine innings of that as well, I'm sure we can work out some kind of deal. 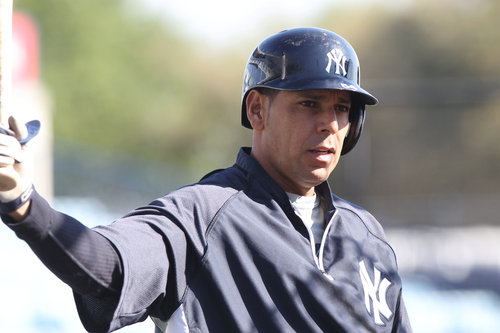 The former Yankee prospect is a former Yankee once more, and the Yanks offered some insight on who will likely be with the team on Opening Day

Boone Logan came in to relieve HIROK. He did not last long due to a line drive hitting him right in the hip fat. Before his fat got bruised, he would give up a walk. With those two runners on base, Aardsma would follow Boone and proceed to give up those runs due to a hit and a wild pitch and throwing error from Cervelli. Ugly. Those two runs would be all the Bucs would need to win.

The Yankees offense was pretty silent today as well, a sentence I hope not to type that often this season. Cervelli managed to hit a triple. Good for him. Thomas Neal, Brennan Boesch, and newly rostered Lyle Overbay contributed with doubles. In fact, Lyle Overbay decided to thank the Yankees for his pinstripes by getting them an RBI so they could avoid the shutout. What a nice guy.

Just a quick blurb before the main story is up, but Juan Rivera has been DFA'd and Ben Francisco has been given the fourth outfielder spot. Congrats to them. Yankees play the Nationals tomorrow at 2PM.

Lyle Overbay: He has been known to shower regularly