Lyle Overbay: He has been known to shower regularly

A player has to have a reason for being on the roster.

Share All sharing options for: Lyle Overbay: He has been known to shower regularly

As with most teams outside of St. Louis, the Yankees found their roster badly disrupted by the manpower shortages caused by the Second World War. They went to the World Series in 1942 and 1943, but by the following year they dropped to third place, and in the war's last year, they finished fourth. They didn't snap back right away in 1946, and in general were thought to be old, tired, and in need of rebuilding. Nonetheless, they won the 1947 pennant and took a dramatic, seven-game World Series from the Brooklyn Dodgers. Then they got old and tired and finished third in 1948, albeit only 2.5 games out with a .610 winning percentage in one of the tightest pennant races in history.

The team's unexpected success in '47 and it's near miss in '48 share the same reason -- first baseman George McQuinn. McQuinn was the Lyle Overbay of his day, a gloveman who could hit a little bit but wasn't a slugger. The Yankees had had McQuinn in their farm system when he was a young player in the 1930s, but they also had Lou Gehrig in the majors. McQuinn was stashed at Newark on the International League and stayed there, playing well but having no shot at the majors given he was blocked by a guy who literally never came out of the lineup.

Is Lyle Overbay worth a look at first base? 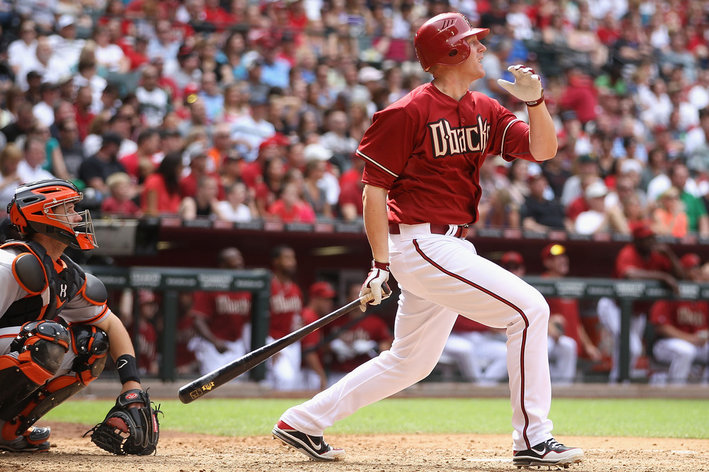 Andrew argues that Overbay might be a better first base option than anyone else in-house.

During the 1937-1938 offseason, the St. Louis Browns took McQuinn in the Rule 5 draft and hefinaly got a chance to play at 28. He hit well at first, but age started to catch up to him, and by 1947, when the Yankees signed him as a free agent, he was 37, had a bad back, and had been released by the Philadelphia A's -- a team that by this time spent years playing anybody-- having hit .225/.317/.316 in 136 games. He was seemingly done... except he wasn't. Nearly 10 years after Gehrig had been forced to retire, the Yankees were still looking for their next first baseman. McQuinn got hot in spring training, pushing 1946 first baseman Nick Etten off the team and Tommy Henrich, who also spent time at first, to the bench. The old man stayed hot throughout the season, hitting .304/.395/.437 with 13 home runs and 78 walks (132 OPS+).

Having received a very unlikely performance from an aging player, the Yankees proceeded to do a very Yankees-like thing and brought McQuinn back from an encore in 1948. His back, quiescent in '47, acted up again, he was unable to play for long stretches, and hit only .248/.336/.421 (101 OPS+). The Yankees released him that fall. His major league career was over.

Lyle Overbay is 36. He's a year younger than McQuinn was when he returned to the Yankees organization, but is perhaps in more decrepit condition, having lost his status as a regular two years ago. Over the last two seasons, he's hit a mere .239/.315/.369 in 186 games. He still has the knack for doubles that once produced 53 two-baggers in a season for the Milwaukee Brewers, but his home run power has lessened and the old patience which was once good for 70 walks a season has also been diminished. Still, as I write this, the main alternative to his candidacy is two months or more of Juan Rivera, who has hit just once in the last six years. Over the last three seasons, Rivera has averaged just .252/.308/.389 (365 games), which is to say that there are almost no positives there -- he's not an experienced first baseman, he's not a hitter, and if he slumps, you're not going to get anything redeeming out of his performances, no compensating walks, defense, or home runs. He's just there. As I wrote earlier today in a piece on ex-Yankee Xavier Nady, the most damaging players are those when, if you asked, "What role do they fill?" you don't have an answer. Rivera, who has hit only .270/.329/.434 against left-handed pitching, isn't even a platoon player. In short, you can't answer the question.

This is reminiscent of the story the Hall of Fame outfielder Paul Waner told about coming to New York in 1944, when he was in his 40s. Once, during a game, someone shouted, "Hey, Paul, why are you playing for the Yankees?"

"Because Joe DiMaggio is in the army," Waner answered.

For Juan Rivera, the answer would be, "Because Mark Teixeira is on the DL." Neither is really a good enough reason; even when a team has been slammed by injuries, it can try to stay above the replacement level. Between defense and patience, Overbay might get the Yankees there; Rivera is almost certain to not do so. And should the Yankees want to platoon, with Overbay starting against right-handers, Ronnier Mustelier and Kevin Youkilis offer enough versatility that Rivera should be purely redundant. Musterlier may not be a great glove, but he can move around the field, hit, and would represent a play for the upside instead of the predictably mediocre.

Overbay isn't a great candidate, but he's the most likely player to deliver the McQuinn Effect at first. There is one thing to say in Rivera's favor: Despite what might seem to be implied by this article's title, I have no doubt his commitment to personal hygiene is beyond reproach.

Update: Juan Rivera has been released. More to come shortly.