The sophomore righthander sure seemed to be pleased that he would have a rotation spot at the start of the season.

Last year, David Phelps was one of the final players chosen to make the Yankees' Opening Day roster, and he rewarded them with an ERA- of 80 in just under 100 innings of work. He was able to mix 11 starts in his 33 games, so fans wondered whether or not he might get a shot at the rotation this year since he was so impressive. A potential logjam in the back of the rotation with fellow starters Phil Hughes and Ivan Nova was resolved when Hughes went down with a back injury. He might only miss a start or two at the beginning of the season, but Phelps will have his spot.

Phelps continued to look good through Spring Training this year, and he capped it tonight with 5.1 innings of three-run ball, striking out nine Orioles in the process. That gave him a healthy 8.7 K/9 for the Spring in 28 innings and six starts. He also only walked two men tonight, so his Spring BB/9 was a fine 2.9. The only inning that gave him problems tonight was the fifth, in which he allowed five straight batters to reach, including a two-run homer by Nate McLouth. He ended the inning with consecutive strikeouts of Brian Roberts and Adam Jones though, and he ended his night with a strikeout of Matt Wieters to begin the sixth. These clearly weren't scrubs that Phelps was striking out--his curveball was crackling and fooling the Orioles hitters.The first four hitters to strike out against him all took a called strike three. Phelps appears to be in line to make his start of the season in early April.

Hughes to begin season on DL 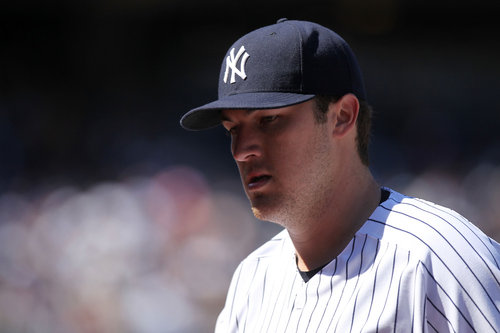 Girardi hopes that Hughes will be ready to return around April 11th.

Robinson Cano missed the game due to a stomach bug, but the Yanks managed to score 11 runs anyway. The Yankees got their first three runs using an unusual collection of players. Jayson Nix and Thomas Neal were the beneficiaries of some luck, as shortstop Alexi Casilla made an error to allow Nix to reach, and Neal lined a ball off of pitcher Jair Jurrjens, forcing him from the game. On that weird play, Casilla threw the carom away, allowing Neal to reach scoring position. The two were brought home against reliever Tommy Hunter on a groundout by third baseman Addison Maruszak (starting for the bruised-up Ronnier Mustelier) and a double by third-string catcher Bobby Wilson (way to go, Hunter.) Eduardo Nunez singled Wilson home two batters later, and the Yankees had a 3-0 lead.

The Orioles' three-run rally against Phelps tied it up in the fifth, but a Wilson sac fly in the next inning to bring home Nix gave the Yankees the lead right back. The Yankees broke the game open the next inning, as Brennan Boesch and Ben Francisco knocked back-to-back homers against Double-A pitcher Chris Petrini. Four of the next five batters also reached against Petrini, and by the time top prospect Mason Williams blooped a double to short left field by McLouth, the score was 10-3. By then, the scrubs were in, so Yankees reliever Branden Pinder coughed up four runs in two-thirds of an inning to make the game a little closer again, but the Yankees prevailed 11-8.

Some other highlights of the day included first baseman Lyle Overbay notching a multi-hit game. Since he's under a quick three-day audition, every game sure counts for him. He's looked good at first base so far, so we'll see if the Yankees end up turning to Overbay or Juan Rivera for the Opening Day gig. Possible future closer Nick Goody tossed a scoreless inning in the eighth with two strikeouts, flashing the fastball/slider combination that helped him to a 14.6 K/9 last year in A-ball. Nunez and Francisco also had two-hit games, and nearly everyone who played got a hit. Dairy Queen for all after the game, boys!

Girardi said Musty told him his knee "cracked'' when he was running in the OF pre-game, will be examined by dr. #Musty