Baseball is big business. The health and wealth of the game has become so transparent that independent valuations are no longer necessary to dispel the myth of baseball's demise that had become popular not too long ago. Nonetheless, Forbes' annual snapshot of individual team finances remains an interesting benchmark for measuring the game's continued impressive growth.

According to Forbes' 2013 survey, which is based on estimates for 2012, baseball franchises cumulatively increased in value by over $4 billion dollars, or nearly 23%. This exponential growth was built upon a slightly decelerated 7% increase in revenue1 accompanied by a nearly 10% decline in operating income2. Although this inverse relationship between valuations and profits seems curious at first glance, there's really no mystery. The rapid rise in local and network television rights, as well as the continued success of the MLB Advanced Media, continue to expand the multiples upon which the valuations are based. In other words, Forbes thinks the future outlook for industry revenue is positive, and, based on the prevailing trends, it's easy to see why. 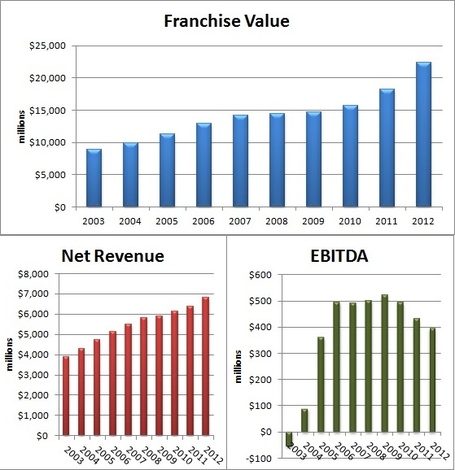 Note: Revenue for each team is net of stadium debt and revenue sharing.
Source: Forbes.com

Not surprisingly, the Yankees sit atop Forbes ranking, just as they have done since the study was first commissioned. Thanks to record revenue, a new lucrative TV deal with YES3, and, perhaps, the ripple effect of the Los Angeles Dodgers' record setting transaction, the Bronx Bombers saw re-accelerated growth in franchise value. That should make Hal Steinbrenner and his partners very happy, but it could make his quest for a $189 million payroll even more difficult to justify. Although the finance geek in Steinbrenner would probably argue that improving the team's bottom line will lead to even more substantial valuation gains, it might take his baseball people to point out that the Yankees' brand is built upon its excellence on the field. 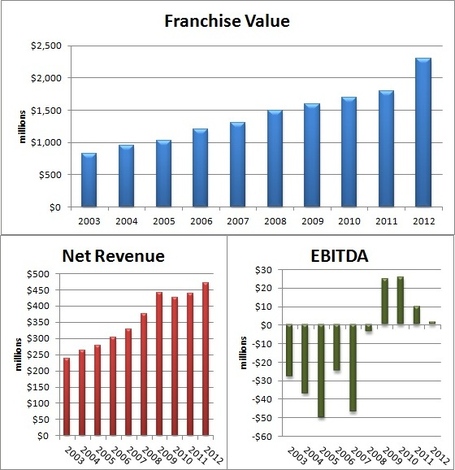 Note: Revenue for each team is net of stadium debt and revenue sharing.
Source: Forbes.com

Perhaps the most interesting thing about Forbes' survey isn't the growth of big market teams like the Yankees, but the continued expansion seen at the lower end of the spectrum. In terms of valuation, the three teams that experienced the most dramatic spike are also the poster children for the "disadvantaged" smaller markets. The Athletics, Pirates, and Rays all experienced an over 40% rise in team worth, which nearly doubled the league-wide average. Although that probably speaks more to the overall health of the game than the strength of each individual franchise, Forbes data shows that baseball's economic prosperity has more than trickled down to the bottom. 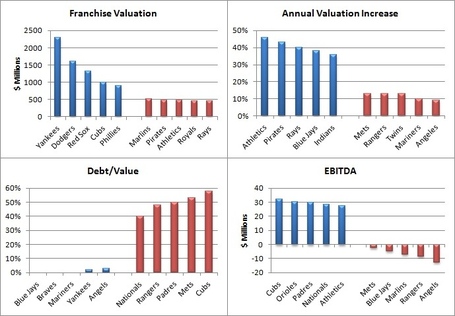 For how long will baseball's economic boom last? The answer to that question largely depends on two trends4: television's insatiable appetite for sports programming and the increasing profitability of digital content and platforms. Although some have predicted that the bubble of TV rights fees will soon burst, most independent analysts, as well as cable industry participants, seem to agree that sports will remain one of TV's most attractive assets into the foreseeable future. Besides, many teams are locking in exorbitant annual rights increases for lengthy periods, effectively shielding them against a market correction.

While media conglomerates scramble for access to baseball's rich supply of programming, the 162-game schedule gives the sport an unmatched inventory of content ideally suited to digital platforms. As Forbes noted, MLBAM, baseball's Internet company responsible for the At Bat app as well MLB.TV streaming video, among other services, could be worth as much as $6 billion as a standalone entity. In the digital medium, content is king, and no sport has more of it than baseball.

It's extremely difficult to forecast economic trends far into the future, but all signs indicate baseball is poised for a significant period of continued meaningful growth. So, the next time you read about an owner crying poverty, or come across an article predicting impending doom for the sport, pay them no mind. Baseball is as healthy financially as it has ever been.

1Forbes' revenue figures differ from totals reported by MLB because they include ancillary stadium revenue (such as concerts and other sporting events), but exclude applicable stadium debt payments.

2Forbes uses EBITDA (Earnings Before Interest, Taxes, Depreciation, and Amortization) as a measurement of operating income. Although usually defined as EBIT, Forbes not only adds back interest and taxes, but depreciation and amortization expenses as well. As a result, Forbes operating profit can appear higher than stated figures.

3Forbes only includes rights fees paid by networks to the team. It doesn't not include a team's equity interest in an RSN. For example, only the amount paid by YES to the Yankees is included. Any revenue derived from the team's partial ownership of the network is excluded. Also, the team's equity stake in an RSN is also excluded from the franchise's valuation. For the latest on the Yankees' financial relationship with YES, as well as the ramifications its new partnership with FOX, see here.

4Forbes also reported on the viability of betting on baseball, which could become another significant driver of revenue, just as it has been for the NFL.