Is Lyle Overbay worth a look at first base?

Share All sharing options for: Is Lyle Overbay worth a look at first base?

This morning, the Boston Red Sox decided to cut first baseman Lyle Overbay rather than offer him a major-league contract. They have free agent Mike Napoli set up to man the position, so they did not really need Overbay. It seemed like he was in camp just in case Napoli's bones turned to dust.

Say, those New York Yankees need a first baseman, don't they? Mark Teixeira will be out indefinitely with his wrist injury that's similar to the one that caused Blue Jays slugger Jose Bautista to miss nearly all of the second half last year. Sure enough, tweets like the following started popping up in the feed shortly after Overbay's release:

To be clear: It's unlikely, but possible, the Yankees will sign Lyle Overbay. They'll take a look at it.

Overbay's never been an All-Star, but he's been around the league for 12 years now, though it's been quite awhile since his peak from 2004-06 with the Brewers and Jays. Originally drafted by the Diamondbacks in '99, the lefty hitter was originally dealt to the Brew Crew prior to the '04 season in a monster nine-player swing with Arizona. Overbay flourished in Milwaukee, leading the National League with 53 doubles and hitting .301/.385/.478 with a 122 OPS+. After a similar year in '05, Overbay was on the move again, this time to Toronto in a five-player deal. He hit .312/.372/.508 with a 125 OPS+, 46 doubles, and he notched a career-high in homers with 22. Pleased with the results, the Jays decided to give him a four-year, $24 million extension, a deal that did not work out for then-GM J.P. Ricciardi and co.

The next four years were mostly "eh," as Overbay hit .255/.344/.427 with a 105 OPS+ for the remainder of his deal. It was about league-average production for a first baseman, so Toronto was not heartbroken to bid him farewell. Since then, Overbay's bounced around three teams in two years--the Pirates, Diamondbacks, and Braves. Again, the results just weren't there; he was cut from the Pirates in August 2011, he was cut from the D-backs last August, and the Braves chose not to retain his services after a horrible September. As previously mentioned, the Red Sox gave him a shot on a minor-league deal this Spring, but they also decided to let him go after he hit .220/.327/.341 in 19 exhibition games (as usual though, take March statistics with a grain of salt).

Let that sink in for a moment--the Yankees are looking into someone who was basically cut by four different teams in the past two years. Woof. Is Overbay so terrible though?

SBN's Marc Normandin wrote back in February that Overbay might have been good as a defensive replacement, and other sources have mentioned that he still has value in the field. That alone would be an improvement over original outfielder Juan Rivera, has played just 106 games at the position in his 12-year career. Meanwhile, teams have played Overbay at first 1,222 times in his career, and the Blue Jays only DHed him 12 times in his three years there. Fielding percentage can be a tricky statistic to work with given the variability of plays and the subjective evaluation of errors, but for what it's worth, Overbay has a .995 career fielding percentage.

Back in '09, FanGraphs rated him as one of the best "scoopers" in baseball, something that would certainly help given the sometimes-errant throws of the infielders (especially Eduardo Nunez). Even though that was four years ago now, guys like Tino Martinez demonstrated that such defensive abilities at first base do not really decrease over the years. It's hard to do much better than Teixeira at first base, but Overbay sure seems like he could at least offer something close to Tex's level.

On offense, Overbay would be a lefthanded hitter at Yankee Stadium, which puts him in about as optimal a situation as he would find at this point. Below is his spray chart from the past two years, courtesy of Texas Leaguers:

Most of his hits do go toward the left side, although it's not as dramatic a spread as I thought it might be. Regardless, a number of those hits down toward the left-field corner could easily go for homers in Yankee Stadium. As recently as last year, Overbay hit .265/.339/.412 in 57 games against righties, although his .751 OPS would have ranked below about 60% of lefty major-league regulars. Still, that number could improve at Yankee Stadium, and it's about the same as Rivera's OPS from last year against lefties (.745).

Rivera does not provide the same quality of defense that Overbay does at first base, so I would pick Overbay in a competition between the two. The caveat is that Overbay cannot back up in the outfield like Rivera. I use the term "back up in the outfield" very lightly since at this point, Rivera is not much of an improvement over the likes of Raul Ibanez there at this point in his career. He probably would not be needed much in the outfield now in light of the Vernon Wells acquisition, but I suppose it's still something Rivera has going for him.

Is Overbay the only show in town? Well, as David Waldstein noted, there will be a lot of players who will be made available over the next few days as teams trim down their rosters in preparation for the season. If no one clearly superior to Overbay is made available though, the Yankees might want to give him a look. They could certainly release Overbay relatively easily upon Teixeira's return, too. It would involve some more tricky decisions with the 40-man roster, but it could be worth a shot given the dearth of other possible first base options. 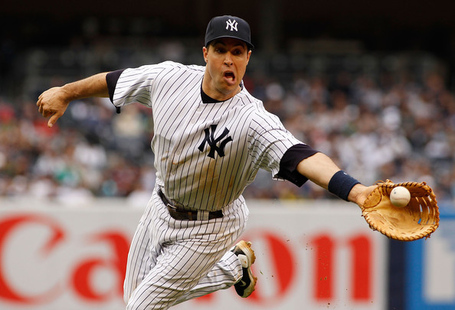 Oh how I miss this goofy man.