How bad are the Yankees at developing young pitchers: Part Two

Taking a look at the Yankees small number of pitching prospects.

Share All sharing options for: How bad are the Yankees at developing young pitchers: Part Two

About a week ago, we took a look at how the Yankees have fared in developing young pitchers in their farm system. This was done by measuring the estimated average WAR expected, based on the peak level of the prospect’s Baseball America Top 100 listing, and compared it versus what was actually generated. Those results concluded that the Yankees' actual Average WAR Generated was a bit better to at least in-line with what should be expected despite an arguably a small sample. The next thing which should be investigated is that small sample, and if it was unusual in relation to comparable competition. One of the things to be conscious of, however, is the opportunity for drafting the kind of elite pitching prospects that can skew the results measuring success and failure.

Having the first overall pick in a draft is usually earned the hard way, but it can influence the study here in significant ways. Having the opportunity to draft a Stephen Strasburg doesn’t come around very often, and rarely does that kind of talent fall all the way down to the bottom of the first round. In fact, thanks to the last CBA agreement; it’s safe to assume that it won’t ever happen in the future without another significant change to the system. That shouldn’t take any credit away from organizations like Tampa Bay, who have earned a good reputation for using their draft picks well with only a few flame outs, but the Yankees' sustained success for a considerable period of time clearly puts them at a disadvantage for acquiring elite prospects via the draft relative to the rest of the league. Thus, the comparison should be the Yankees' development performance with comparably successful teams. The following is the list of the top quintile of teams based on the most games won between 1995-2007: 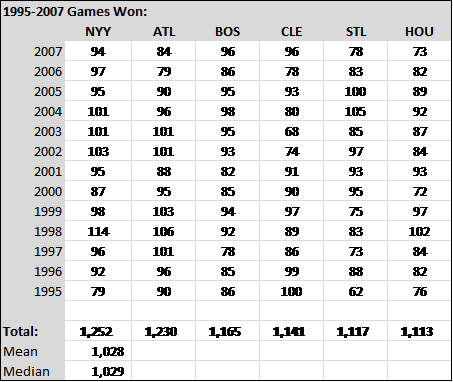 Now that we have established a peer group, it is possible to make some comparisons between the Yankees and these teams. First, let’s see if there are any significant differences in the number of pitching prospects. Considering the length of time this group achieved success should equate to all of the teams drafting fairly consistently late in the rounds.

Well, the Yankees are tied for last with the Astros for fewest ranked pitching prospects during this period, but when looking at the total amount of listed prospects; the Yankees fall into the middle of the pack. So far it looks like they did indeed focus on developing fielders over pitching until Brian Cashman changed that strategy back in 2005. So the relatively fewer pitching prospects may indeed have more to do with a conscious decision made to focus on fielders over pitchers up until recently. If we go back to the article from last week which I am basing the framework for this investigation upon, you'll notice that minor league fielding prospects have a much higher success rate than pitchers. It makes a lot of sense then to pick more fielders over pitchers in the draft, and particularly so when you have less of an opportunity set to begin with by picking consistently towards the end of each round.

How bad are the Yankees at developing young pitchers: Part One 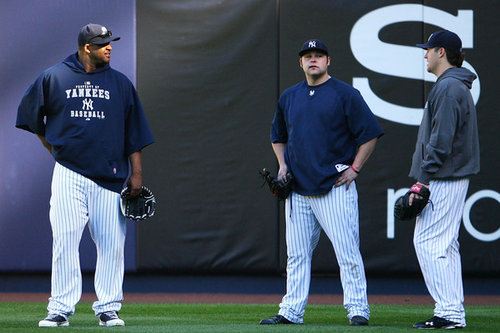 Is the Yankees' negative reputation about developing pitching a legitimate one?

So how did the rest of this peer group fair in developing their pitching prospects? It can be assumed that they probably faired at least pretty well relative to the average in the league. After all, it’s unlikely that a team could last for over a decade in the top quintile of the league if it wasn’t at least above average in generating productive players from every available source. Sure enough, that’s exactly what we find. The following lists all six teams with the number of pitching prospects broken out into quintiles, and each teams’ estimated and actual Average WAR calculation. 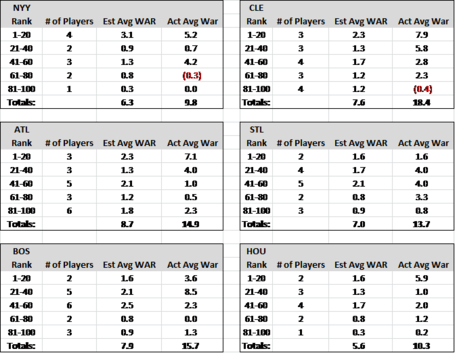 Every team in this group beat their estimated Average WAR with the Indians taking the top spot both in absolute, (18.4 Avg. WAR), and relative performance, (141% more Actual over Estimated WAR). Unfortunately for them, a large part of that elite production has been generated for other teams, as they were not able to keep C.C. Sabathia and Cliff Lee in the fold. The Yankees, while not far behind Houston, do come in last in both absolute and relative measures. So while the Yankees are beating the overall league’s expected performance for developing pitchers, they are trailing their peer group that likely shared a similar opportunity set. Is there a reason for this?

In pulling together the data for this investigation, I had to do a lot of manual entering into spreadsheets. I find that entering data into a spreadsheet manually tends to help the mind find trends that might not have readily been apparent. Using a spreadsheet to sort the data then helps to make those trends easily seen. Here’s a few things that popped out from this groups recent pitching prospect history: 1.) The teams with the highest Average WAR production also had the highest number of 1 through 4th round draft picks on that prospect list. 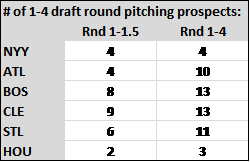 Clearly there’s some correlation here with the number of pitching prospects drafted in the early rounds, and the degree of success at producing above Average WAR versus estimated. I’m basing this list, however, on prospects that made the BA Top 100. The next question is how effective have these teams been at using their draft picks to produce recognized pitching prospects? That will be a study I’ll address down the road, but for now let’s just recognize that it appears the Yankees' general focus on positional prospects over pitching until 2005 is what likely puts them at the back of this pack.

Another thing that comes out of the data is a bit of an oddity, and I would completely understand if someone wanted to ignore it assuming it’s just a coincidence. However, I find it really weird how consistent the annual number of busts there were between 1995 and 2007. I classify a bust as a prospect that either produced negative Average WAR, or never even got a shot at the big show. For some reason those busts turned up at a pretty consistent number regardless of how many total prospects there were that year. 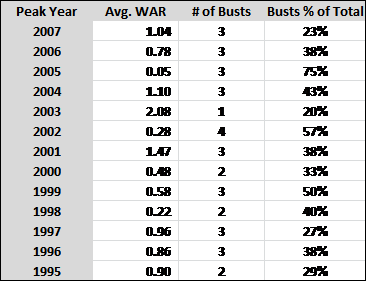 I know there’s no obvious conclusion to draw from this point, but I’m tossing it out there since generally I’ve found that things that appear weird at first can often turn into something meaningful after further consideration.

It's probably is unfair to paint the Yankees as notable for shipping pitching prospects out to other teams only to watch them flourish somewhere else. This turned out to be a fairly common event from this list. Cleveland lost elite producers due to financial constraints as mentioned before, but there were a number of successful Average WAR pitchers on this list that produced mostly for teams other than the ones they were drafted for. The Atlanta Braves are actually the most notable team from this list for trading away pitchers that turned into productive members for other teams: Adam Wainwright, Jason Schmidt, Matt Harrison, Odalis Perez to name a few. Of course, this is probably due to their particular situation of having established elite veteran pitchers already on the roster during that period. It would seem quite logical to expect them to be moving their excess pitching prospects in search of missing pieces to a championship team. It’s debatable if the Yankees situation back then truly lines up with Atlanta’s, but the point at least rhymes with the organization’s viewpoint of their status as continually searching for the few missing pieces to surround their championship caliber core of veterans.

While the Yankees do appear to be at least at the rear of their peer group in terms of pitching prospect development, most of that delineation is likely due to their focus on developing positional prospects over pitching prospects up until Cashman changed the focus of their drafts in 2005. The larger number of pitching prospects generated by quality organizations does equate to higher rates of production, and it likely takes a greater use of early round draft picks to generate a consistent flow of Top 100 pitching prospects. There is still a lot of grey area in trying to answer questions around organizational development success rates. At what point is an organization most influential over a given player’s development? Is it in fact overstated to begin with? If so, then maybe all that we’re doing here is determining which organizations’ have been the best at scouting pitching prospects and using their draft picks most efficiently. Considering the correlation between elite production and early draft rounds, it’s clear that better answers should come by an extensive review of the prospect acquisition process via the draft; and in particular I am interested in determining if the Yankees' greater number of position prospects over pitching was due to the usage of early round draft picks, or actually suggests an organizational skill set that tips the performance in that direction. Like I said before, those are questions I’ll try to answer in the future.