Are the Yankees' prospects really that unreliable?

The Yankees just made a deal for Vernon Wells, the Santa Claus of "Veteran Presents" himself! The Yankees will pay $13 mil of his remaining $42 mil Angels contract. The photo above perfectly described my feelings about this deal.

Share All sharing options for: Are the Yankees' prospects really that unreliable?

Let me just get this out of the way first: I know what organization I choose to root for. I know what to expect from them. I know that the Yankees have made it to the postseason for the last 16-17 years while signing or dealing for vets. Sure, it was before "Cash Rules Everything Around Me" was no longer a popular Wu Tang Clan song in the mindset of the Steinbrenners when it comes to spending on the team, which still remains to be seen. Even so, the Yankees recent signing of Vernon Wells shouldn't upset me that much. But it does. It really does. At this moment I can still see the reddish hue on my forehead from banging my head into the desk. Even I didn't think the Yankees would do this, especially not to the extent in which they did. 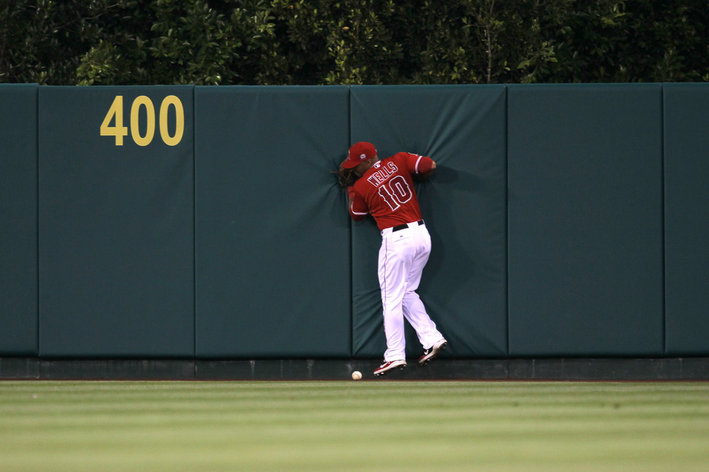 The Yankees' desperation knows no bounds with the rumor that acquiring Vernon Wells is on the horizon.

Vernon Wells. It was the deal that made the Toronto GM seem like a mad genius. It was a joke deal we would talk about when Granderson first got injured. And yet, here we are. Here we are in the final days of Spring Training looking at prospects getting a chance to play and showcase their stuff, hoping some of them would make the team. Here we are seeing those hopes dashed with signings like this, and Brennan Boesch, and Ben Francisco. Here we are frustrated at the Yankees' "bizarro world" like frugality, ignoring a chance to get Nick Swisher back while making deals like this. Here we are at the culmination of said frugality. The regular season starts in seven days and the Yankees just made a deal to take Vernon Wells off the Angels' hands. I cannot even imagine the blissful joy in the Los Angeles of Anaheim area right now. The Yin to our rage-filled Yang.

I'm not a expert regarding the Yankees' minor league system. When I have questions regarding that, I refer to our esteemed pinstriped scribe, Tanya. My question right now is the title of this article: are the Yankees prospects really that unreliable? I doubt they are, but this is my rational mind trying to make sense out of this irrationality. Thomas Neal has been impressive thus far in Spring Training. As of now, I see no reason why he cannot even be a stopgap till Curtis Granderson returns to the lineup, or a bench player after he returns. Ronnier Mustelier just hit a walk off home run in yesterday's Spring Training game and can supposedly play third base and the outfield. Yet we're looking at Youkilis at third and Juan Rivera at first base come Opening Day. Melky Mesa has shown power. Oh well. Giving rookies a chance is a risk. At least it's a cheap risk though, unlike Vernon Wells.

Despite my rage over this, it could still work out. Check out this tweet from the non-tripping version of Buster Olney:

Take it for what it's worth: Talked to two scouts who thought Vernon Wells looked better in spring training, with a quicker bat.

Veterans can still provide value. Chavez and HIROK proved that last year. We're looking to Ichiro to provide some this year. Vernon Wells could very well wind up being a move we praise Cashman for later on. Only time will tell. The key thing time has told us is that prospects like Thomas Neal or Melky Mesa have little future in this organization. I'd say that they'd really have to prove themselves immediately, but Jesus Montero came strong out of the gate in Sept. of 2011 and even that wasn't enough to get him behind the plate in pinstripes, which left us with the Stewvelli fusion dance creation. Vidal Nuno has shown immense promise thus far, and there's little chance we'll see him on the roster.

This is why I really don't get into the Yankees minor league system all that much. I'll keep my eye on it and ask others, but I know what organization I root for. With that said, I still don't understand this deal at all. Even if Wells has a productive year, the amount of money the Yankees will be paying for Wells is insane. Two years, $13 million for him? How is this a cost effective deal for the new .99 cent store Yankees? How does this make sense? What the hell am I missing here? The only conclusion I can draw is that the production we've seen out of our rookie outfielders this spring is a cruel, laughable joke. Why else would the Yankees pay that much money for Wells for two years instead of giving them a chance?

There's still a chance to see said rookies this year with the way the injury bug has been plaguing this team lately. Even though I miss baseball and look forward to Spring Training every year, I don't know why I even bother. I see young players and admire them. I then see the hopes of them playing for this organization dashed. I still think the Yankees will be a force to be reckoned with this year. It doesn't make trades like this any easier to swallow, though. As one of my Mets' fan friends told me, "Being a Yankee fan is easy!" It is indeed easy. It still can really suck if you're a baseball fan, though.

In closing, I must apologize. I said on my Twitter account that this would be a classic IGYAR rant. Then I remembered I'm a front page writer now. If this were a classic IGYAR rant, who knows the sheer level of clever, rage-filled profanity I would have unleashed over this trade. For now, this particular scene has been on my mind all night long. It perfectly describes my feelings.