Share All sharing options for: All’s not well for Yankees as team looks to Angel in the outfield

The Yankees are paying the price for a thrifty off season. Because of the team's decision to cut costs instead of maintain depth, the Bronx Bombers have been forced to scrape the bottom of the barrel to supplement a roster ravaged by injuries and free agent departures. As a result of that desperation, Brian Cashman appears poised to become the latest GM stuck with one of baseball's hottest potatoes: the contract of Vernon Wells.

According to numerous reports, the Yankees are on the verge of acquiring the former All Star outfielder from the Angels, whose rapid decline as a player has made him the odd man out in a crowded Los Angeles outfield. At first glance, it would appear as if the Yankees are taking a low-risk flier on a veteran, but in this case, the devil really is in the details. Since the ink dried on Wells' seven-year, $126 million contract with Toronto, the outfielder has become a poster boy for overpriced contracts. So, after doing the Blue Jays a favor by taking over the contract two seasons ago, you can bet the Angels are anxious to pawn off the final two years on the Yankees.

It's pointless to evaluate the acquisition of Wells without first considering the cost to the Yankees. At the risk of being too blunt, if Brian Cashman sends to the Angels anything more than a journeyman minor leaguer, and if Jerry DiPoto sends back anything less than an overwhelming majority of the $42 million owed to Wells, the trade would be a loss for the Yankees. What's more, it would be a further indictment of the team's priorities, not to mention the prudence of adopting a policy of fiscal constraint heading into a season with obvious health-related question marks.

Let's give the Yankees the benefit of the doubt (even if the organization is starting to use up some of its goodwill). Considering Hal Steinbrenner's frugality and Brian Cashman's baseball knowledge, it seems safe to say the Yankees will neither be sending the Angels a prospect nor taking responsibility for a meaningful portion of the contract. With that concern aside, we can examine the prudence of a Wells acquisition without the distraction of all the zeros at the end of his pay check.

Yanks on Verge of Trading for Wells 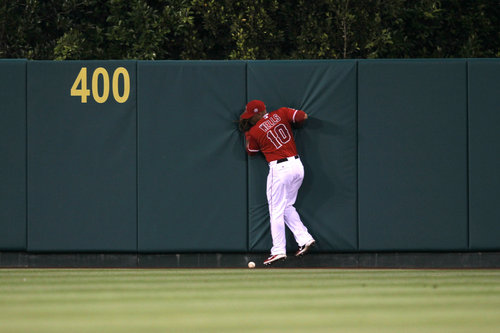 The Yankees' desperation knows no bounds with the rumor that acquiring Vernon Wells is on the horizon.

The best argument for acquiring Wells is he would help address the Yankees' lack of production from the right side of the plate. Unfortunately, recent numbers don't bear that out. In three of his last four seasons, Wells has struggled against left handers, so he doesn't profile as a replacement for Andruw Jones. Careers evolve, but at this point, it's hard to identify a specific role that he seems well suited to perform.

Another alternative is the Yankees believe Wells can turn back the clock for a month or two. If you put stock in spring training numbers, the outfielder's 1.112 OPS in 41 exhibition season plate appearances might augur well for a rebound, but Cashman is too smart to let March performance exclusively determine his Opening Day lineup. However, that doesn't mean the team can't have a favorable view of Wells. Maybe the Yankees' legion of scouts have seen something in Wells' swing that warrants a low-cost risk? There's no way to justify the move by looking at statistics, but perhaps those carefully examining his skills have made a reasonable case to Cashman.

Finally, for the cynical, there is another motive for acquiring Wells. Facing an angry fan base for the first time in years, and perhaps sluggish ticket sales, the Yankees might be hoping that a big name will stem the criticism and pessimism. Do Hal Steinbrenner and Brian Cashman thinking Yankee fans are that naïve? That's hard to believe, but then again, many of the attempts to justify the team's budget cutting seems to be based on that presumption.

Hal Steinbrenner and his number crunchers have wagered on the Yankees being able to win on a budget, and that still could prove to be true. However, if the Bronx Bombers are to remain in the game until October, they may need to bluff their way through April and May. Can Vernon Wells help them do that? Based on his recent performance, probably not, but if the Angels are willing to give him away, the Yankees might as well roll the dice. Besides, if the Yankees fail in 2013, the culprit won't be the Wells trade, but the many short sighted decisions that preceded it and necessitated such desperation.