On the down low: Who says groundball pitchers are overrated?

Share All sharing options for: On the down low: Who says groundball pitchers are overrated?

Over at Baseball Nation, Rob Neyer recently wondered whether ground-ball pitchers are overrated. Using an analogy from his mentor Bill James as a launching point, as well as an anecdotal observation that many of the best pitchers of all time are/were fly ball pitchers, Neyer cast doubt about the perceived proficiency of ground-ball generators.

Although Neyer didn't provide much detail about James' analysis or conclusion, which is behind a pay wall, the comments section suggested the sabermetric forefather eventually dispelled many of his doubts about ground-ball pitchers. Unfortunately, there were no statistics provided to back up the claim, so it was either shell out three bucks for a subscription to Bill James Online, or do a quick analysis of my own. The latter is provided below, free of charge (although it may not even be worth that much).

The framework for the analysis was to take every qualified season by a starter since 2002, of which there were 961, and then classify them by their relation to the league average ground-ball rate over that span. After segmenting the population in groups ranging from ultra high to ultra low, the composite ERA and WAR/season for each cross section was calculated. The chart below displays the results. 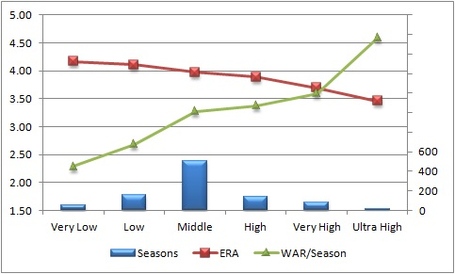 Note: For GB%, there was one "ultra low" season, which was included with the "very low" group
Source: fangraphs.com

While the distribution of seasons follows a natural curve, ERA and WAR improve as the rate of ground balls increases, culminating in 19 ultra high ground ball pitchers who combined for an ERA of 3.45, compared to 3.96 for the entire group. Included in this segment of extreme ground-ball pitchers are usual suspects like Derek Lowe and Brandon Webb, who collectively combined for 12 seasons, but a comparison of those two pitchers shows that not all ground-ball pitchers are created equal. Some, like Lowe and Tim Hudson, strike out very few batters, while Webb and Kevin Brown, for example, have used the punch out as a weapon. 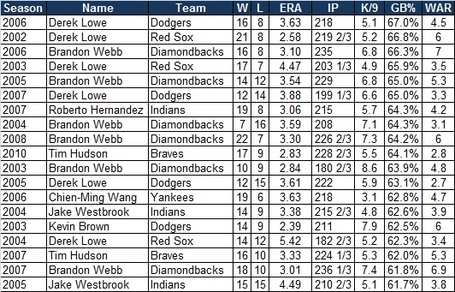 Although a myriad of variables influence a pitcher's performance, the strikeout is one of the most correlated to success, both in the present and future. So, what happens to our view of ground-ball pitchers when we also take into account their strikeout rates? The next series of charts provides another snapshot. 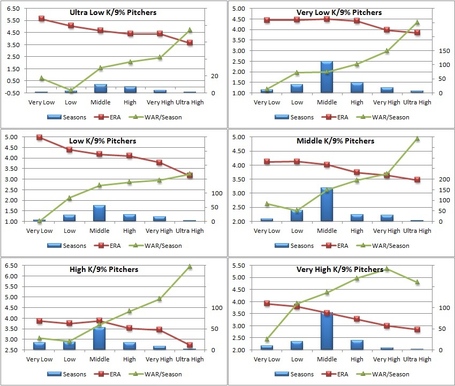 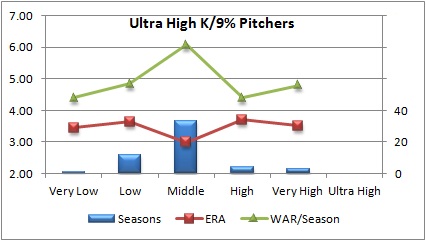 The lines and bars above are a lot to digest, but fortunately, they all basically tell the same story. As a pitcher's strikeout rate improves, so too does his overall performance. And, within each cross section of strikeout proclivity, as a pitcher's ground-ball rate increases, his ERA and WAR responds positively. In other words, it's great to be a strikeout pitcher, but even better when you also get more than your fair share of outs on the ground.

So, are ground-ball pitchers overrated? Based on the data above, it appears as if their favorable reputation is well deserved, at least among pitchers who throw enough innings to qualify for the ERA title. And, when you think about it logically, that's not an earth shattering revelation. After all, balls hit on the ground can't leave the ballpark, and even though more grounders become hits than fly balls (unless they are line drives), fewer go for extra bases. It's also worth noting that just about every evolution in the game has favored pitchers who keep the ball on the ground. From smaller ballparks to more powerful hitters to better field maintenance, the playing ground has been slanted in the ground-ball pitcher's favor. It could be that when Tom Seaver and Bob Gibson were pitching, as James noted, ground-ball pitchers were overrated. However, in today's game, the lowdown on pitchers who keep it down low seems clear. There's nothing exaggerated about throwing ground balls.

More from The Pinstriped Bible