Donor Relations vs. Public Relations in the ultimate fight between departments... Oh, that's not what the acronyms stand for?

Love the WBC? Well, the grand finale is on tonight, as possible WBC MVP and Yankees star Robinson Cano's undefeated Dominican Republic powerhouse takes on a Puerto Rican squad that overcame an opening loss in the previous round to Team U.S.A. and upset two-time defending WBC champion Japan to make it this far. The D.R. has beaten Puerto Rico twice in the tournament so far, but both games were at the end of a round-robin and on both occasions, neither team needed to win to advance.

Will WBC Pride Give Way to CBA Greed? 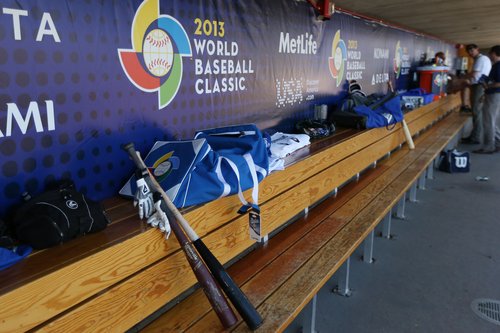 As Puerto Rico and the Dominican Republic get ready to take their longstanding rivalry to the global stage, baseball should basking in the glow of the international spotlight. Instead, the sport seems more interested in using the event as a backdrop for cost containment.

Based on pure roster makeup, the D.R. is the easy favorite, but Puerto Rico has been impressive so far despite only having a handful of legitimate major leaguers on the roster. Hell, keep in mind that Samuel Deduno is the starter for the Dominicans, and even though he's given up just one run in two WBC starts, he still had a mediocre 94 ERA+ in 15 starts with the Minnesota Twins last year. 35-year-old journeyman Giancarlo Alvarado gets the nod for the Puerto Ricans, and if he can hold the Dominicans down in a victory, he may very well be the WBC MVP. In two starts, he's only given up two runs. He's already reaped the benefits of a nice WBC performance by receiving an invite join the Colorado Rockies after today. Not bad for a guy who's spent 17 seasons in the minors and the last three in Japan. Maybe he can finally realize his big-league dreams.

Hate the WBC? Well, Cano's coming back soon, and after today, you won't really have to hear about it again until Gary Sanchez is hopefully the Yankees' unquestioned starting catcher (2017). Derek Jeter will be nearing his 43rd birthday. Weird.

The WBC Final gets underway at 8:00 on MLB Network. Maybe next time, it can actually air on a much more accessible channel. Feel free to chat about whatever you'd like though. Like nachos! Nachos are delicious. I should get some nachos.