The Derek Jeter daily ankle: Day to day in more than the usual sense

There's never been one quite like Jeter, and he's still being asked to do many things that an older player has never done before.

Share All sharing options for: The Derek Jeter daily ankle: Day to day in more than the usual sense

As you saw reported here and elsewhere, there were two bits of Derek Jeter news today: He was scratched from today's game with stiffness in his left ankle, and Joe Girardi speculated that Jeter could be the Opening Day designated hitter. To be fair, he also suggested it could be almost any living player in pinstripes:

"Could be Jeter," Girardi said. "Could be Nunez. Could be a lot of different people. Could be one of our right-handed hitting outfielders. ... I'd like to have (Jeter) at shortstop on Opening Day, but if we collectively feel he could use a few more days, we'll wait. But as I've said all along, we just kind of have to play it by ear."

You've seen this many times before, but it's worth revisiting: the list of shortstops 39 or older who have played even 100 games at the position in a season is extremely small -- just two have done it in the last 60 years, Luis Aparicio in 1973, and Omar Vizquel in 2006 and 2007. That's it.

The reason for that is probably obvious: it's not necessarily that there were no shortstops that old who were physically incapable of playing 100 games of baseball, but there were only two who were viewed as being equal to the defensive demands of the position at that age. Everyone else offered no incentive to put them in the lineup, because most shortstops don't hit -- once the glove is gone, you might as well not bother. Those shortstops who could hit, were moved. By the time Ernie Banks was Jeter's age, he had been a first baseman for nine years.

Having said that, it's not like many 39-year-olds have played 150 games in a season at any position, and that remains true even today, despite all the benefits of modern medicine and conditioning. There have been just 34 player-seasons of 140 or more games in a season since 1950, and the list is dominated by current and future Hall of Famers like Dave Winfield, Rickey Henderson, and Frank Thomas, as well as players who were nearly that good, such as Darrell Evans.

Jeter is obviously in that class of player, so if there's precedent setting to be done, he's as likely to do it as anyone in the history of the game. That said, as those who have watched Jeter's defensive abilities wax and wane over the years know, it's not so much that Jeter is still a standout defender, if he ever was one, but that the Yankees have decided that the benefits of having him in the lineup outweigh having a less offensively robust shortstop who is a more agile defender.

For two of the last three years, that has been a debatable conclusion. Now, Jeter's age and ankle injury may render the point moot. Not only does he have to play adequate defense on an ankle that may not be as flexible as it used to be. Fortunately for the Yankees, the offensive bar at shortstop is fairly low right now. Even with Jeter in the pile, the average AL shortstop hit only .255/.306/.368 last season. As such, there's less pressure on Jeter to hit were he to be at any other position. Note that Jeter's style of offense is probably more vulnerable to the power of age than any other -- give an old guy 400 or more plate appearances and he probably won't hit .300. Just 15 players have done it since 1950, most recently Barry Bonds (.362) in 2004, Kenny Lofton in 2006 (.301), and Jeff Kent in 2007 (.302). Jeter has to hit .300 to be a real asset compared to the average player, but can slip quite a bit and still be better than the typical shortstop -- but that's true if and only if he's playing good defense. 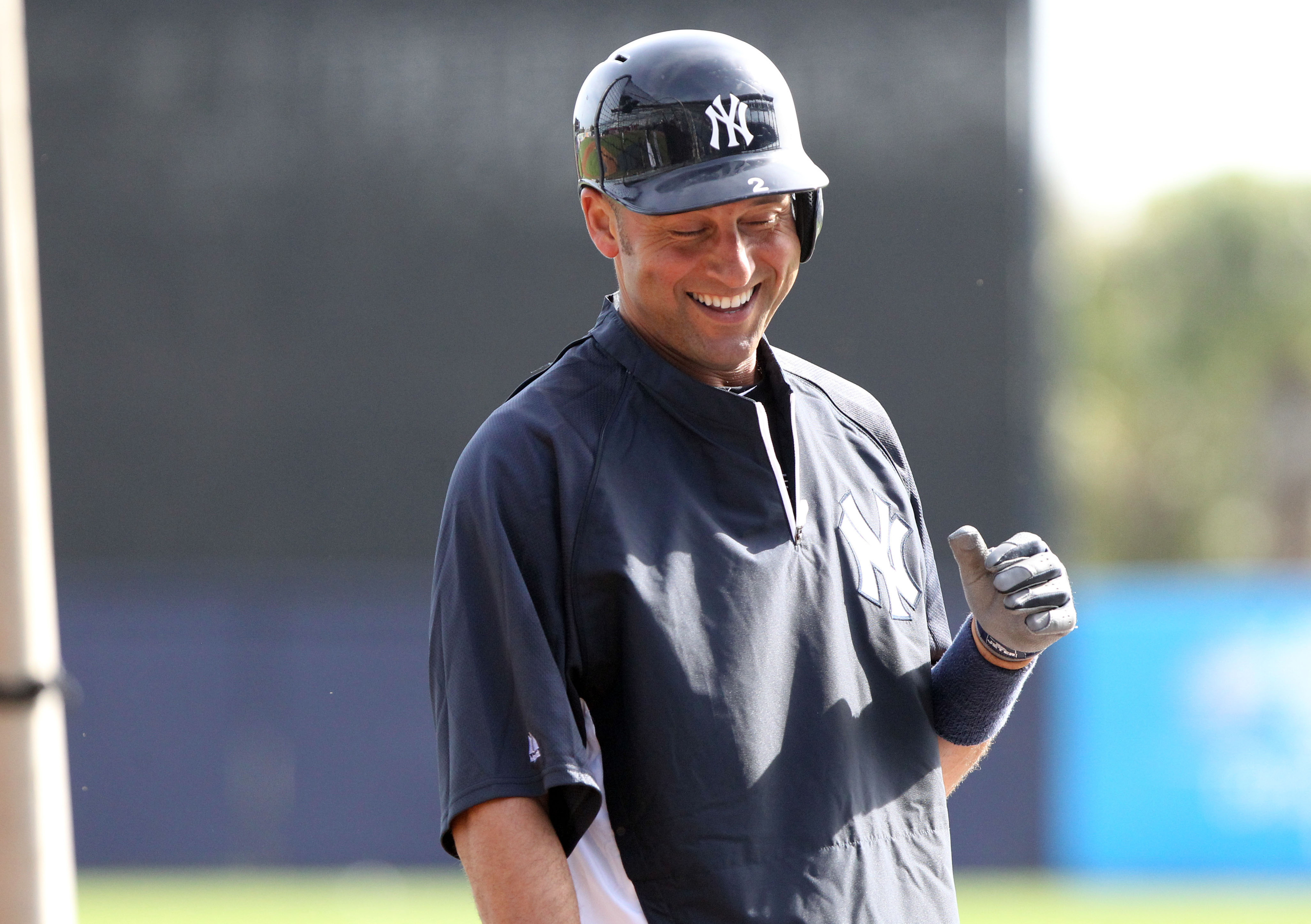 As for the possibility of playing him at designated hitter more often, DH can be a surprisingly weak offensive position. As Cee Angi discussed back in October, the position peaked back in 1998. Since then, the class of designated hitters has been up and down. Last year was down, with aggregate rates of just .256/.328/.430 at the position. Jeter has slugged .430 just once in the last five years, so that could be a stretch.

Of course, if Jeter is up to the defensive demands of playing shortstop and is only used at DH to get rest, most likely against left-handed pitching, with Travis Hafner sitting and Eduardo Nunez at shortstop, though the aggregate production will be credited to the Yankees at short, the actual platoon would be between Hafner and Nunez. That could be reasonably productive assuming a Hafner revival and consistency against lefties by Nunez; he's hit .298/.332/.436 against them for his career.

Given the team's many injuries and free agent defections, there is going to be immense pressure on those still standing to produce. There are always great expectations to live up to if you're Derek Jeter, but in this particular year he could have used a better supporting cast, the better to take up the slack if he's not able to play at the same high level. This one time in his career, Jeter is a victim of bad timing.

I realize much of this is old hat at this point, and I apologize for revisiting it one more time, but each time Jeter is scratched this year, each time the ankle troubles him or a grounder skips by, just out of reach, or he taps into one of those double plays that have become such a specialty, these are the things we'll be thinking about. As many have remarked when a player is listed as day to day, "aren't we all?" If it's possible to be day to day in more than the usual sense, that's Jeter's 2013.

More: The real reason Bud Selig will not retire Will WBC pride give way to CBA greed? Know Your 40: Michael Pineda