What if Mark Teixeira needs surgery?

What will the Yankees do?

Share All sharing options for: What if Mark Teixeira needs surgery?

It has been announced that Mark Teixeira has a partial tear in the tendon sheath of his right wrist, which would make it the same injury that Jose Bautista had last year that required surgery. It was originally said to be just the tendon, even after Cashman talked to doctors, and that it was different from Bautista's, but apparently now it's the same thing. Thankfully, the tendon seems to be fine and the sheath isn't torn completely, but the timetable for Tex to return has been unavoidably pushed back. An injury like this takes time to heal from because you have to wait for it to be 100% other wise you risk making everything worse. The doctors are saying there's a 75% chance that the injury will heal without surgery, but what if he does end up needing it? 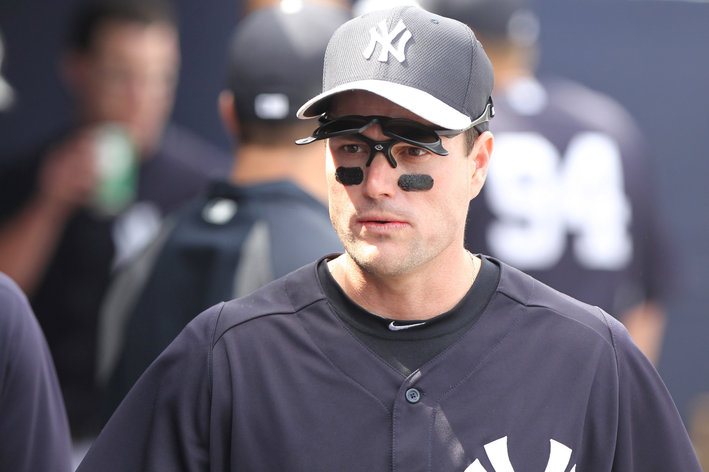 Juan Rivera will certainly be filling in at first base in the short term, but he might not be a longterm option depending on how well he hits, especially since he's a pretty terrible first baseman on the field. Teixeira had the worst season of his career in 2012; a 2.9 WAR effort. It was still a better season than Rivera has put up since his 2.8 WAR 2009 season. Since then he has not hit over 15 home runs and his offensive game as a whole has fallen apart as he has only managed a 0.5 WAR in the following three seasons. Juan Rivera, and even if Dan Johnson is stashed away in Triple-A, would not be enough.

The problem about announcing your players' injuries is that now everyone with that knowledge will have control over you. They sense your desperation and won't give up anything for cheap. Why players and managers are so open to the media about such dealings is beyond me. Everyone knows that Tex is hurt, so the extent of it will only dig you further into a hole. Don't give organizations more power than they already have.

The Yankees have very little in terms of in house alternatives. The only first base option the Yankees have that is above A-ball is Luke Murton, and he hasn't reached Triple-A yet. Murton will be 27-years-old in May so he's not really a prospect. He might hit a lot of home runs (25 in 2012), but he strikes out a ton. No one is considering him for a roster spot.

A quick look around various Spring Training camps have non-roster invitees such as Matt LaPorta, Jason Giambi, Casey Kotchman, and Lyle Overbay, but none of these players will be worth the roster spot over Rivera, even if they were simply released.

There are four realistic trades that could be made to improve the first base situation, two of them will alter the make up of the 2014 roster, but only one of them will have an impact for many years to come.

The Yankees could acquire Carlos Pena from the Astros, but like with Freddy Garcia last season, he would have to approve a deal, since he signed a contract just this offseason. Justin Morneau could be had from the Twins depending on how much of the $14M the Yankees would have to pay. Unfortunately, neither of those players can hit lefties very well and though they'd play every day at first base, when Tex returns they would have an even harder time getting into the lineup. Travis Hafner already can't hit lefties, so it would just be more of the same, although Hafner could be hurt long before any of this comes into play.

It's unlikely that the Tigers would trade him, but Victor Martinez would be a great fill in for Teixeira and he can hit everyone so if Hafner goes down, he can move into the DH spot every day. The catch is that Martinez is under contract through 2014, so they would be taking on a $25M contract and the Tigers aren't looking to unload him.

The Yankees' best bet is to try and trade for the Rangers' Mike Olt. He can play third base and Youkilis can move over to first. The Rangers have been interested in Joba Chamberlain and Olt has really no place to play with Adrian Beltre entrenched at third base. The Rangers have traded away good prospects for a reliever before (Mike Adams), so if they want Chamberlain (and probably a good-to-decent prospect or two) it could be more possible than people would believe. Olt would not only help in 2013, but could be a longterm solution at third base, even though Alex Rodriguez is on the team. A-Rod will need more and more time at DH, so there will be minimal conflict of playing time. Olt is still only 24, so he has plenty of time to play.

Mark Teixiera needing surgery will be bad news for 2013, but it could end up being good news in the long run. Remember what happened when Aaron Boone needed knee surgery?