Tanya goes on and on about prospects, as is her standard.

In most prospect lists we've seen this spring, Mason Williams is nearly the unanimous pick as the best that the Yankees' farm system has to offer. Gary Sanchez, Tyler Austin, and Slade Heathcott have followed Williams in some order or another, depending on who is doing the ranking, but Williams has been on top of the majority of lists. Jason Parks at Baseball Prospectus has released his Top 10 Yankee Prospects list, and his top spot goes, not to Williams, but to Gary Sanchez.

Gary Sanchez's bat comes with lots of praise, and he's managed to make improvements on his defense behind the plate recently, giving scouts more reason to believe that he can stay at the position than they had previously. Parks believes the Yankees could start Sanchez off in Double-A this season, putting him on track to see the majors at some point next year. He's just a few months past his 20th birthday, giving him plenty of time to work on the perceived weaknesses of his game, like expanding the zone and below-average defense.

The aforementioned Williams ranks second on Parks' list, drawing praise for his defensive skills and ability to run. Williams' 2012 season was cut short by a shoulder injury that required surgery not long after he was promoted to High-A Tampa, but Parks believes that he is ready for Double-A now. He doesn't have many weaknesses, according to Parks, but he'd like to see him add strength, improve his baserunning, and improve upon his power, which is below-average. Williams will probably begin 2013 in High-A instead of Double-A because of Trenton's overly crowded outfield, which may put Parks' estimate of a 2014 arrival to the majors in jeopardy unless he moves fast. There is a reason that he is seen as nearly the unanimous choice for top Yankee prospect, and moving quickly the rest of the way through the system wouldn't be that surprising.

Breaking up the strangle hold that Williams, Austin, Sanchez, and Heathcott have had on the first four spots in every other list, Parks ranks pitcher Jose Ramirez as third on his list. Ramirez managed to really impress in major league camp this spring, Thursday's game not withstanding, and he should be in Double-A to start the upcoming season. Parks mentions that Ramirez's fastball has plus to plus-plus velocity but needs to work on his command to go along with the good control he has exhibited. Ramirez is risky because of his injury history, but he has "top-of-the-rotation stuff with back-of-the-rotation consistency", according to Parks.

Slade Heathcott and Tyler Austin round out BP's top five, and both have an estimated major league arrival date of 2014. Heathcott has battled injuries every season of his professional career, but scouts are in love with all of his tools. Parks has high praise for his defense, running, and arm, believing that his hit tool could also end up being above-average. His aggressiveness that has caused him to play a little bit out of control at times is listed as a weakness, and he'll need to mature in that department to make it in the big leagues. Austin has hit at every level he's been sent to so far, sending him rocketing up prospect rankings. Parks calls him a natural hitter with .280-plus potential, but thinks that his power may fall short of a typical corner outfielder. He estimates that Austin could hit 10-15 homers in the big leagues and says that if the power develops, Austin's projection and stock as a prospect will rise accordingly.

Last year's first round draft pick, Ty Hensley, ranks as sixth on Parks' list. Parks thinks that Hensley has the ability to make a lot of teams look silly for letting him fall all the way to the Yankees with a strong arm and excellent life on his pitches. An asymptomatic shoulder abnormality kept Hensley from getting the money he was initially looking at, but if he's pitched with it this long, maybe it will truly be a non-issue. In a best case scenario, Parks thinks Hensley could be a second or third starter in the major leagues, with a backend innings-eater being his floor potential. Hensley will probably start the season at Low-A Charleston, and Parks believes he could see the majors by 2016. 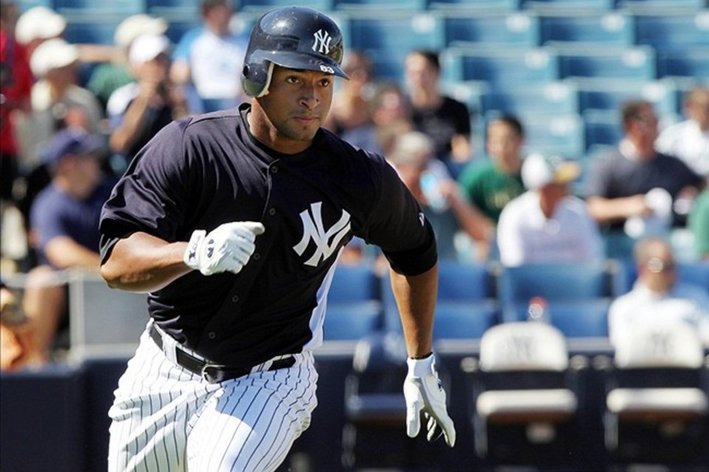 If you like prospects, ranking things, and posts about posts ranking prospects, here's another one for you to check out.

The lone remaining position player on the list is second baseman Angelo Gumbs at number seven. Parks sums up Gumbs' first full season saying that he showed "flashes of brillance and flashes of flameout" in his time in Charleston last year. Gumbs has an above-average arm and great bat speed, but he struggles to make adjustments at the plate. Parks believes that Gumbs has the potential to be an impact second baseman, but his future status will depend on whether or not he can put it all together.

Starting pitchers Jose Campos and Rafael DePaula rank as 8th and 10th on Parks' list, and both of them come with their own concerns. Campos was seen as the potential prize of the Michael Pineda/Jesus Montero trade, but an injury caused him to miss almost all of 2012. He has a good arm with good command, but Parks accuses him of throwing instead of pitching at times. Campos has gotten the injury risk tag, and Parks sets his future potential at a number three starter who can improve his stock by staying healthy and improving his change up before his estimated arrival date of 2015. DePaula missed valuable development time after it was discovered he used a fake name and birthday and visa issues set him back even further. Parks compliments the fact that DePaula remained poised during his visa troubles, and thinks he should start the season with Charleston after making the jump from the Dominican Summer League last year. Having never pitched in America to this point, it's difficult to get a good read on what he can become, but if everything comes together, he could bring electric stuff to a rotation or bullpen in the major leagues.

Mark Montgomery comes in as the Yankees' ninth best prospect, and he represents the best chance of any player on the list at seeing time in the major leagues in 2013. More than one list leaves Montgomery out of the top rankings, but it's difficult to see how they justify that after he has dominated at every level he has pitched at professionally so far. Parks mentions that all Montgomery did last year was "miss bats and break hearts". Parks compliments Montgomery's explosive movement and loves the slider, like everyone else who has seen it. Parks also concludes that Montgomery has a potential to be a closer or frontline setup man. The Yankees sound like they will need one of those as soon as next season, so Montgomery's arrival may not have been able to come at a better time.

Three prospects listed as on the rise within the Yankees system are Nik Turley, Ben Gamel, and Dante Bichette, Jr. Turley had a disastrous start in Spring Training, but he's drawn favorable comparisons to Andy Pettitte because of his left-handedness. He's never going to be a top prospect, but he could make his way into the top 10 with a strong season in Double-A. Gamel had a successful season at Charleston as a 20-year-old, and could use his versatility to move into the upper tier of prospects on the Yankee farm if he proves that his success was repeatable. Bichette's season at Charleston was pretty dreadful, and he will most likely start the season there again in 2013, but if he can re-gain what had people so high on him before last year, he should be back in the discussion as one of the better prospects the Yankees have to offer.

Do you agree with Parks' decision to put Gary Sanchez ahead of the trio of outfielders? When ranking prospects, do you tend to favor ceiling and potential or major league-readiness?